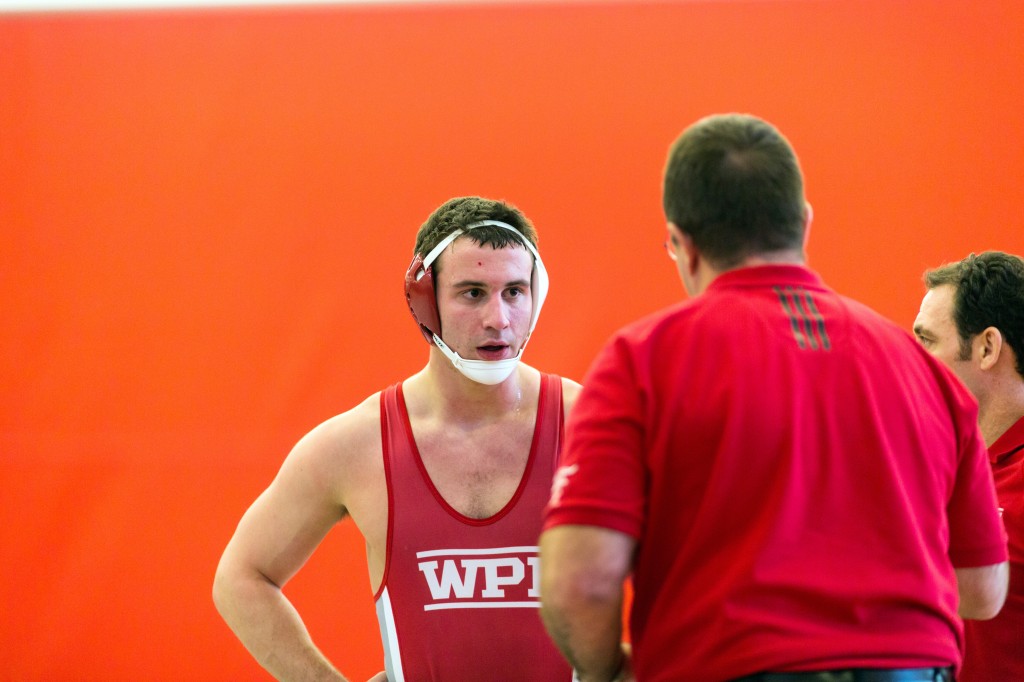 Mike Perrucchio and Matt Taber, both captains, and Brian Jennings and Alex Freilich have helped bring the WPI wrestling team back to a level where it can go to the mat with just about anyone, according to head coach Steve Hall.

“We’re not ready to win the New England championship,” he says, “but we can compete with the best teams out there.”

Going into weekend matches with Coast Guard and Bridgewater State, the team stands at 11-9, despite being hobbled by injuries.

“We’ve had a huge rash of injuries where there’s been only one day all year that we’ve had our entire lineup,” and that was in December, Hall says. “It’s just been one of those seasons where it’s been one thing after another.”

The wrestlers are gearing up for NCAA regional competition March 1 and 2 at Wesleyan and, hopefully, the NCAA championships March 14 and 15 at Cornell.

Hall is proud of his squad’s accomplishments on and off the mat, noting that WPI is third in the New England Wrestling Association conference in GPA, missing second by .001 point.

“It’s really an unbelievable group of guys,” he says. “There are not a lot of teams pulling the academic load that we are.”

Don’t try to tell Hall that wrestling is not a mainstream sport.

“I grew up in New York state, where wrestling is absolutely a mainstream sport,” he says. “If you couldn’t wrestle, you went on to play basketball.”

Competing at the college level is particularly difficult as wrestlers go to class, manage their diets, and constantly work out to be in top shape. And when a wrestler steps on the mat, he’s all by himself.

“It’s special, there’s no doubt about it,” Hall says.

The coach, who wrestled at WPI in the 1980s, compiled a 54-4-2 record and was inducted into the WPI Athletic Hall of Fame in 2008, notes that the sport has long been popular on campus. Fans would pack matches in Alumni Gym – “It sounded like there were 10,000 people in that little box” – and for the second year can see the team in the Sports & Recreation Center.

Hall hopes his wrestlers have a great experience in the program, just like he did wrestling for coach Phil Grebinar 30 years ago.

“I’m pretty fortunate to be back doing this,” he says. “I’m not really sure you can ask anything more.”