President Leshin reflects on her first months at WPI, looks ahead to Inauguration, planning the next steps

During her first five months at the helm, President Laurie Leshin has become immersed in the university’s culture and history, while spending countless hours getting to know faculty and staff, students, trustees, and alumni. And now, with her inauguration just days away, she is focused on showcasing WPI and getting down to the planning that will elevate WPI to the next level. 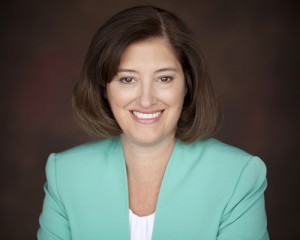 “The first five months have been really extraordinary. They’ve exceeded my expectation in essentially every way, which is hard to do, because I have high expectations,” she said during a recent interview in her Boynton Hall office. “The community has been incredibly kind and welcoming to me and my family. The campus has been so wonderful to get to know.”

She related that the conversations she’s had have been friendly, but also substantive about where faculty, students, staff, trustees, and alumni think WPI has built a strong foundation and been successful, but also where there are further opportunities. And the inauguration will be a fitting occasion to begin outlining goals for the coming years.

“First and foremost, it’s an opportunity to showcase and celebrate WPI,” she said. “As we embark on our sesquicentennial celebration, the inauguration is really a kickoff to that 150th year. It’s a great time to stop and take stock and to celebrate where we’ve been, and then use it as an opportunity to pivot to the future. And, as the theme says, imagine more for WPI.”

Education is not just four years between the ages of 18 and 22. It really is a lifelong process because technology changes fast.
Laurie Leshin
WPI President

The inauguration and related events provide an opportunity to showcase WPI and what makes it distinctive, she said. One of its distinctions has been the ability to attract and retain women in STEM disciplines and careers, due to its curriculum of project-based learning, with a focus on impact, she said.

“Both of those things, we know, are meaningful to young women as they think about careers, generally, and as they think about careers and STEM, specifically,” she said. “Our curriculum is really built for people who want to translate theory to practice, and practice to impact. And we know that doing that has an even longer long-term impact on women than men, based on our surveys of our graduates and those who have done off-campus projects, versus those who haven’t. I think WPI is built to be a place that embraces all people who want to make a lasting impact in the world.

“Increasingly, we need to get the word out that being a scientist isn’t just about working alone in the lab late at night. Or, it’s not just being a computational scientist, sitting by yourself at a terminal, coding. It’s about finding solutions to challenges that increase the quality of life for people in communities around the world.”

And looking forward, one way of maximizing the university’s success is to make more of its global programs available to all students, she said. Currently about 60 percent of undergraduates complete off-campus projects, and she wants to see that increase to 90 percent, or as close to 100 percent as the university can reasonably reach.

“That’s an investment that we’ll need to make, and I think we’re prepared to move in that direction,” she said. “We’re putting plans together to do that.” 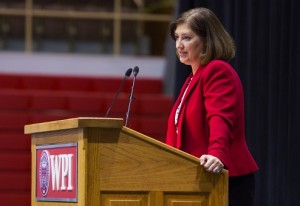 While that’s under way, she’s considering building upon interdisciplinary programs that combine computation and life sciences, as in bioinformatics, or that work in robotics or data science, that showcase emerging fields at the intersection of disciplines. “I think those programs are attractive to a new breed of technological student who really wants to be on the cutting edge,” she said. “I want to position the programs we have even better, and continue to think on the cutting edge on new academic programs. That is going to be really critical. And then, we need to do better at touting our successes, at telling our story, engaging the students where they are, which is online, and attract them here.”

Leshin wants to leverage technology so that the time students and faculty spend together are as engaging and productive as possible. That includes graduate and certificate programs the university offers.

“I truly believe that we need to educate a generation … as many people as possible in STEM fields for the future prosperity of our country,” she said. “Education is not just four years between the ages of 18 and 22. It really is a lifelong process because technology changes fast. The idea of being able to offer training and degrees, those capabilities to students from companies around our region, students from around the country or from around the world who want to increase their skill levels, I think that’s a great opportunity for us. It fits with our foundation of theory and practice. Many times these will be professionals who are out in the world, and we can help them practice better.”

With her experience and contacts at NASA, in addition to the ongoing Centennial Challenge robotics competition NASA holds at WPI, the prospects of further collaboration with the space agency exist. “Frankly, I think the Centennial Challenge is a nationally unique level of collaboration, so we’ve already got something that’s spectacular and wonderful,” she said. “But it won’t last forever, because eventually, somebody’s going to win that challenge. I think our robotics programs, our data science programs, and our life sciences programs are very relevant to the research work NASA is doing.

“We’re working to see if there are some IQP possibilities with NASA. We used to do some, and we’d like to rebuild that. The great thing about NASA is people love space, people love robots, people love rockets, and it’s just a good way to hook into people’s imaginations. Another of our big collaborations is with the ExxonMobil Bernard Harris Summer Camps. It isn’t NASA, but he’s a former astronaut and again, using space to get kids interested in STEM is a good idea.

As she looks ahead to her role leading the university into its next phase, Leshin points to her experiences in academic settings – going back to the age of 16 – and years running large organizations within NASA, some with a budget more than $4 billion, as good preparation.

“I’ve been a researcher, I’ve had graduate students, I’ve built a lab, and been very successful securing research funding. I’ve published papers, I’ve taught large classes and small classes. I’ve been where our faculty are. I’ve worked closely with undergraduates on projects. So it’s all something I have experience with that relates very much to faculty work. I very much respect faculty work.

“NASA was a very large reach of experience, so that was very helpful to just know how to get things done in large, complex, diverse organizations with different stakeholders and different interests,” she said. “How do you bring people together, and how do you work productively on things that no one person could do alone? I have a lot of passion around enabling organizations to really reach their potential as communities, and I’m excited to focus here on what we can do collectively to make a broader impact.”

She has also had to do some hard things as a leader at NASA, like canceling massive programs. “You learn what you’re made of when you go through some really difficult things that feel really personal, even though they’re part of our work life. So, it gives me confidence that I can work with groups of people who have different views of things, and work hard to try and bring people together, even when not everyone agrees, to help the organization move forward.”

The inauguration comes during WPI’s sesquicentennial year, and Leshin sees the weekend celebration and events as a proper kickoff to the 150th year and subsequent planning. “The strategic planning process is well timed to build upon the foundation of the first 150 years of WPI, and position us for continued success. We’ll continue the innovative thinking about higher education that has been in the DNA of this place since it was founded.”

The strategic planning process will be inclusive, involving nearly 100 people from across the campus, she said. “I look forward to working with our community on putting that plan and our priorities together. That’s going to start with the inauguration address, basically. I’ll talk about the pillars of the plan in my speech.

“I’m very aware, and grateful that I am walking into a healthy institution in a time of turmoil for higher education, and to an institution that is excited about the future, built upon the great foundation of the 15 presidents that came before me. It’s a great honor to be the 16th in that line of leaders.”