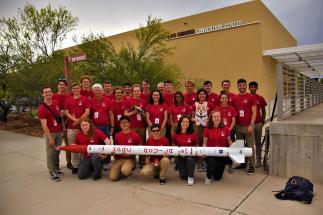 Life Lessons on The Launchpad

The WPI High Power Rocketry Club's entry for the 2022 Spaceport America Cup blew up a little less than halfway to its 10,000-foot goal earlier this summer, but the team still found rewards amid the debris that fell out of the Southern New Mexico sky. In fact, it was the failure of the 12-foot-long solid-propellant rocket that ultimately proved as valuable as any trophy.

“It’s part of the whole discovery process,” said team captain Kevin Schultz ’23. “We have to figure out what this is. It’s a lot like solving a mystery, and as engineers, we really do enjoy that.”

HPRC’s 24-person travel team—part of a 135-member-strong club—joined 1,300 other participants, representing 150 student teams from 95 higher education institutes and 16 countries at this year’s competition, held June 21-25. The competition calls for teams to construct a rocket and shoot it into “space” while carrying a small payload and is considered a premiere recruitment opportunity for sponsors, which this year included Sierra Space, Blue Origin, and Virgin Galactic.

WPI’s team worked throughout the school year on the mostly scratch-built rocket, replicating the systems approach, collaborative work environment, and testing that graduates might experience working for a rocket design and manufacturing company. Design and computer software work started in A term, and by D term the team was integrating all the different subsystems.

Testing the rocket proved tricky; the team was only able to test various components using existing rockets, so its inaugural launch would be in competition. Brad Miller, associate director of the Robotics Resource Center, who advised the team for the competition said bringing a rocket that had not been fully tested was a tall order, but the students nearly pulled it off. So much had to go right—from proper deployment of the rocket’s air brake system to nailing the algorithms that controlled its trajectory—and it very nearly did.

“If you look at the level of work they’re doing, they’re solving really hard problems,” Miller said. “They’re not just going out and buying a hobby rocket.”

Miller said as soon as the rocket failed, everyone on the team immediately turned to doing failure analysis.

“They retrieved the rocket, got the flash cards, looked at the telemetry. They were figuring out graphs, coming up with all these theories. I can imagine other teams that had their rocket blow up at 3,500 feet would have just thrown in the towel. This team turned around and did a ton of work to find out what happened. I couldn’t be more proud of these students representing WPI.”

Throughout the competition, the WPI team offered help to other teams; Schultz said that with some epoxy, fiberglass, a heat gun and some ideas, they helped the Duke University squad solve a problem and stay in the competition, where Duke placed quite well. And even after the WPI students’ rocket exploded, they helped other entrants retrieve their rockets, and even helped direct first responders to the site of one that had caught fire after it came down.

“We all worked so much together on this rocket, and a lot of times we’re friends from other classes and other projects,” Schultz said. “We’re always working together, always collaborating, always talking together, working through the sticky situations. I think it spilled over into this competition.” Miller has advised many clubs, organizations, and IQPs and MQPs throughout his career, and said he was more impressed with this group than any other he has been involved with.

“The quality was at or better than MQP level, and they’re doing it on their own,” Miller said. “It’s not like they’re having weekly meetings with academic advisors. They’re figuring it all out on their own. The fact that 135 of them are getting that organized, and that they’re all enthusiastic, still pulling and doing the work, is a testament to the organization they’ve been running.”

Schultz said the HPRC is a “labor of love,” but for many team members, involvement has sparked interest in new career paths, particularly amid the resurgence of manned and unmanned space travel in recent years. He said several HPRCalums have gone on to intern or find employment with firms like United Launch Alliance, SpaceX, and Blue Origin.

Team member and club public relations officer Natanel Pinkhasov ’24 said HPRC allows students to bring to the launchpad a spirit of exploration that goes beyond their degree programs.

“That’s what lets us reach new heights,” he said. “Not only as a team but on an individual level, it allows you to excel and go to new places in your life and your career.”