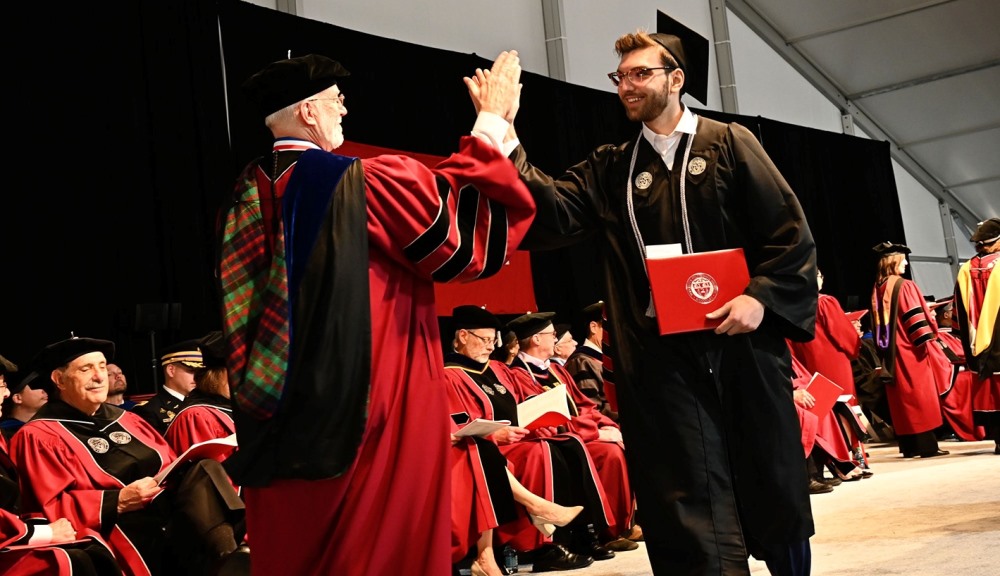 A member of the undergraduate Class of 2019 receives a high five from Dean of Undergraduate Studies Arthur Heinricher as he crosses the stage during WPI's 151st Commencement exercises.

WPI awards nearly 1,020 bachelor’s degrees to the Class of 2019 and honors Gordon Hargrove, executive director of Friendly House in Worcester 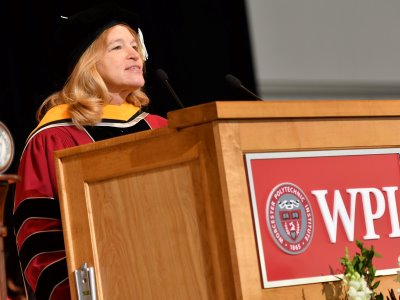 Recalling the Apollo 11 mission of 1969, Commencement speaker Ellen Stofan asked graduates, "So, what is your Moonshot?"

Today, as part of its 151st Commencement exercises, Worcester Polytechnic Institute honored the 1,019 members of the undergraduate Class of 2019 in a ceremony held on the campus quadrangle. WPI President Laurie Leshin and Board of Trustees Chairman Jack Mollen presided over the celebration, at which the keynote address was given by Ellen Stofan, the John and Adrienne Mars Director of the Smithsonian’s National Air and Space Museum.

Over 850 master’s and doctoral degrees were presented in a separate ceremony on Thursday evening.

Stofan, who has more than 25 years of experience in space-related organizations and a rich background in planetary geology, also received an honorary doctor of science degree. 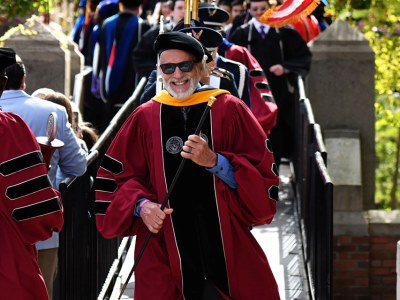 In her remarks, Stofan lauded the graduating seniors, whom she called “the next generation of STEM innovators,” before pointedly asking, “Where do you go from here?” She noted that students are graduating 50 years after the Apollo 11 Moon landing on July 20, 1969. The historic milestone was spurred, in part, Stofan noted, by the challenge President John F. Kennedy placed before Congress in an address in May 1961.

She then quoted from a speech Kennedy delivered at Rice University on Sept. 12, 1962, in which he said, “We choose to go to the Moon in this decade and do the other things, not because they are easy, but because they are hard.” Kennedy’s speech would come to be known as the “Apollo Moonshot.”

“And that phrase, ‘moonshot,’ has come to mean more than just spaceflight,” said Stofan. “It stands for what President Kennedy called ‘a goal that serves to organize and measure the best of our energies and skills.’”

John Mollen, chairman of the WPI Board of Trustees, welcomed graduates, families, and guests to the ceremony.

“So, what is your moonshot?” Stofan asked the graduates, telling them that a moonshot can be societal or personal, and that it can change the world or simply change one life.

“Perhaps your moonshot is to create a life-saving vaccine or cure. Or to help a rural community create sustainable systems. Or to stem climate change. Maybe it’s to go to graduate school or to one day be a professor and become a guiding light for your students. Or maybe your moonshot will one day take you to the Moon or Mars and you will be the next person to walk on the lunar or Martian surface,” she said.

Stofan described her own moonshot, which was to send a spacecraft to Saturn’s moon Titan to sail on its methane ocean. Stofan and her colleagues submitted a proposal to NASA for a Discovery class mission, and they became one of three finalists. For the next eight months, Stofan and her team worked tirelessly on the proposal, but they lost to the Mars InSight mission. 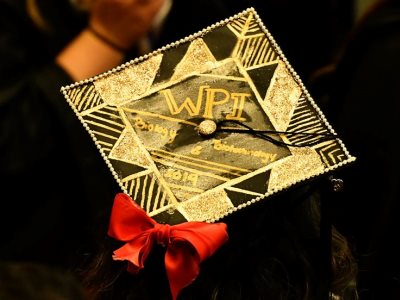 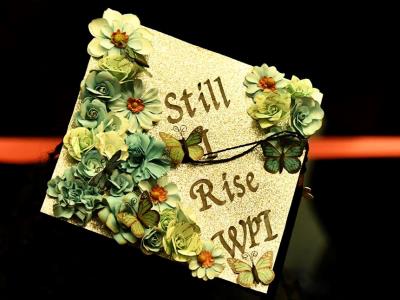 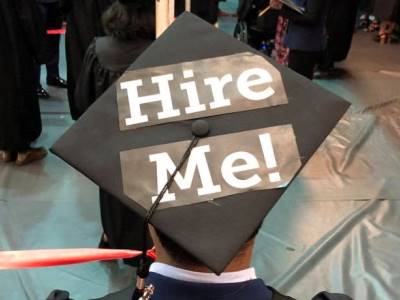 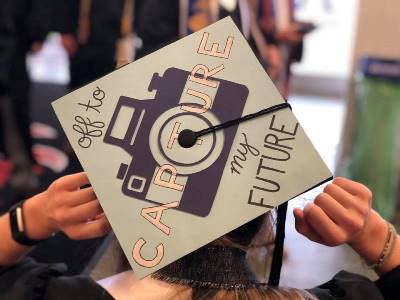 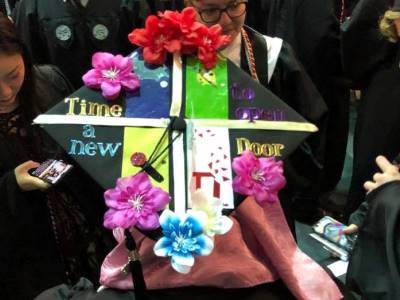 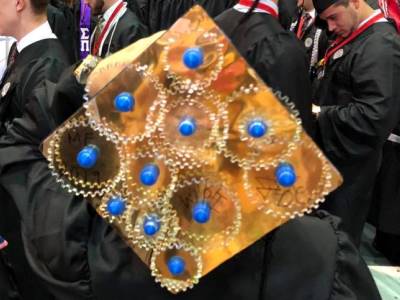 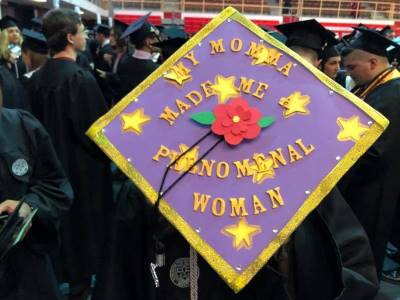 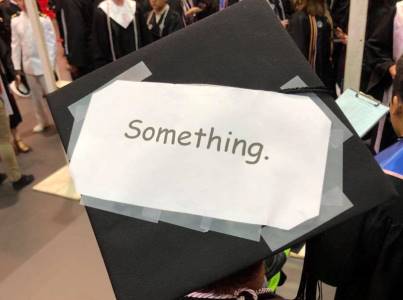 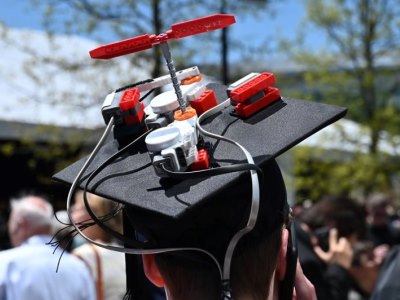 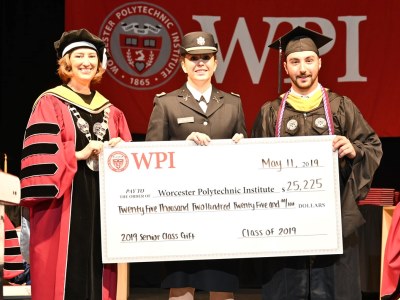 The gift from the Class of 2019 was presented to President Leshin by Rosie McCarthy and Lucas Mancinelli. It will support WPI's Global Lab.

“I was crushed,” she said. “I cried. A lot. But I had to pull myself together and call the team to tell them the bad news. I had to smile and talk calmly and coherently at a debrief where they tell you all the things you didn’t get quite right.”

From that experience, Stofan said, she gained newfound appreciation for the act of extending oneself beyond one’s original expectations. She also learned to appreciate failure, and noted that NASA actually has a program called Fail Smart. “It’s literally an award for failure. And it is rooted in the idea that innovation can only truly flourish when you allow failure, when you are not afraid to fail,” she said.

Stofan closed by encouraging students to find their passion and to embrace the entire process. 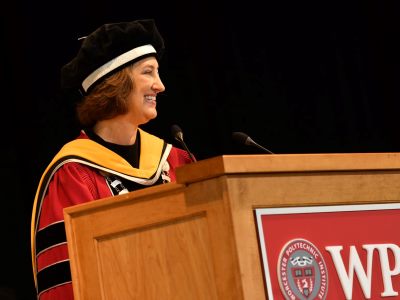 In her remarks, President Laurie Leshin told the graduates that she and the campus community are proud of their many accomplishments.

“What I want you to take away from today, when you think back on your graduation one day from now, one year from now, or 35 years from now,” she said, “is the importance of discovering your passion, identifying your moonshot to work toward, and not being afraid of all the steps—and missteps—along the way.”

In her remarks, President Leshin told the graduates that while she is sad to see them go, she and the campus community feel a great sense of pride in all of their accomplishments at WPI. “Over the past four years, we have all watched, and hopefully helped you discover, your passions and strengths, we’ve seen you work very hard, and we’ve seen you truly make a difference.”

President Leshin called out three students who wrestled challenges head on and left a positive mark on campus, starting with Cielo Sharkus, a first-generation student who credited her success to her faculty advisor, Destin Heilman, associate teaching professor of chemistry and biochemistry. Leshin noted that Sharkus is passionate about environmental justice, and that she dedicated her Major Qualifying Project (MQP) in Switzerland to creating a

A relatively new Commencement tradition, students stop to pat the Proud Goat statue as they enter the tent on the Quadrangle.

fluorescent biomarker for heavy metal contamination. “She is a strong, resilient, and fearless person who is not afraid to speak up for those who cannot do so themselves,” Leshin said.

The president also talked about Jess Locke, who focused their MQP on acid rock drainage, and shared Leshin’s area of research (“another person who studies rocks, right on!”). Aside from being a stellar academic, Leshin said that Locke had been described as “one of the most influential students on the campus.” They championed support for the LGBTQ+ population, helped residential services implement gender-inclusive housing for upper class students, and normalized the use of pronouns when introducing oneself, among other initiatives. “In short, Jess has helped to make WPI a much more inclusive campus, and for that we thank them. Congratulations, Jess!” 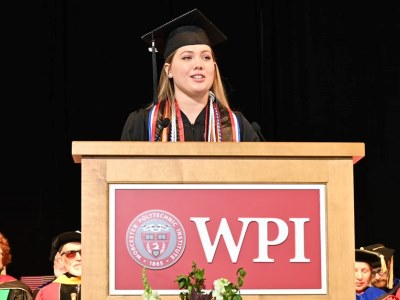 Lastly, Leshin recognized Jared Grier, who suffered a spinal cord injury at the end of his freshman year. Even though Grier underwent multiple surgeries, medical appointments, and physical therapy, he still took online classes, and ultimately returned to campus a year later to continue pursuing his degree. Leshin said that the support Grier received from his brothers at Lambda Chi Alpha, staff in the Office of Accessibility Services, and his classmates and professors helped push him forward, and pay it forward. Grier dedicated his MQP to designing a device that can recreate the movements and experience of non-disabled skiers for disabled skiers.

“While I’m proud of each and every graduate of WPI, my pride in seeing Jared graduate today is pretty over the top,” Leshin said. “Jared, congratulations. Your spirit captures the very best of this community.”

WPI awarded Gordon Hargrove, executive director of Friendly House in Worcester, an honorary doctor of humane letters degree for his “distinguished leadership of a vital Worcester institution, his passion for making miracles happen in the lives of others, and his inspiring example to generations of WPI students, faculty, and staff.” 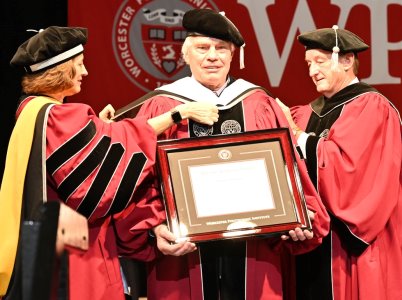 Class speaker Emily Molstad, of Newington, Conn., a major in mechanical engineering with materials science and engineering, recalled for her classmates the “nine words we heard when we arrived, and over and over again throughout our four years here: Go to class. Do the Work. Ask for Help. These words, repeated so often, weren’t always easy to practice day to day, but once we followed them, they put us on the path to success.”

Molstad added to that campus mantra. “As I leave the comfort of the hill, I offer six new words that will guide us on our professional and personal journeys: Embrace failure. Prioritize people. Stay present.”

She told classmates that WPI taught her to embrace failure instead of shying away from it. “Robert F. Kennedy once said that only those who dare to fail greatly can ever achieve greatly.” She challenged classmates not to freeze when faced with future failure, but to lean into it, and to lean on their friends, families, and colleagues, and march on.

Calling WPI’s distinctive seven-week term structure “a sprint and marathon all in one,” Molstad reflected on the benefits of slowing down and being present in the moment, and urged graduates to develop the important skill of taking things one day at a time.

Since 2016, WPI has held two distinct exercises in the spring to celebrate the accomplishments of its undergraduate and graduate students, owing in part to the growth of its programs, particularly its graduate programs. On Thursday evening, WPI awarded 468 master’s degrees and 50 PhDs in a Graduate Commencement ceremony at which Freeman A. Hrabowski III, president of the University of Maryland, Baltimore County, gave the keynote. Hrabowski and Kevin O’Sullivan, who recently retired as president and CEO of Massachusetts Biomedical Initiatives, received honorary degrees.

In addition, WPI hosted a commencement ceremony Wednesday, May 8, for graduating softball and track-and-field athletes who were off campus Saturday representing WPI in championship events.