Linking the Meaning of Life, Magic, and the Sciences 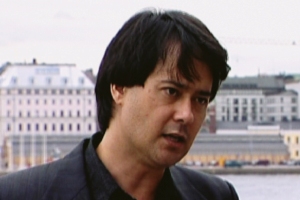 WPI philosophy professor John Sanbonmatsu deals with intense, morally complex subject matter in his research. For example, he is currently writing a book about the politics of meat and exploring the effects of animal agriculture on the environment. However, Sanbonmatsu also likes to integrate a magic trick or two into his lessons. Recently, he sat down with the Daily Herd to discuss his motivation for using this teaching method, the importance of philosophy to a university focusing on the sciences, and the most challenging and rewarding parts of his job.

A graduate of Hampshire College, Sanbonmatsu did anything but adhere to convention when deciding where to obtain his bachelor’s degree. He refers to the school in Western Massachusetts as an “experimental college” where students work one on one with faculty to construct their own curriculum. “Although I had been a strong student in primary school, I had always secretly felt that grades and tests got in the way of true learning, so Hampshire, which has neither, was perfect for me,” he said. Sanbonmatsu went on to obtain his PhD from the interdisciplinary History of Consciousness Department at the University of California at Santa Cruz when he was drawn to the program’s similarly flexible approach.

Since beginning his position at WPI, Sanbonmatsu has adapted to many of the challenges that teaching philosophy at a university consisting predominantly of engineers and scientists and recognizes its rewarding aspects as well. He notes that helping students “question the ideology of the sciences, which essentially views the natural world and the beings in it as nothing but objects to be manipulated for our use” can be a daunting task. He says that expanding students’ views of the world is a rewarding process because it enables them to consider “how much more interesting and troubling the world becomes once we begin to question our commonsense attitude toward society and its institutions”.

In addition to the rewards his position yields, Sanbonmatsu believes it serves a vital purpose within the context of WPI’s broader academic structure. He jokes that in his “happily biased” view, “philosophy is the proper ground of all science and technology.” He also notes that “without the ability to reflect critically on our values and beliefs… one is at risk of developing forms of scientific or technological knowledge that are in fact quite destructive or harmful.” Using global resource consumption as an example, he identifies the future of our planet as being dependent on moral considerations of the current technological order. “If you want to think about what the earth is going to look like in 500 years, without proper philosophical reflection on where we’re headed, picture Mars today.”

In order to engage students in these types of discussions, Sanbonmatsu has adopted magic as a method in the classroom. He took up magic as a hobby after becoming interested in the psychological magic of British entertainer Derren Brown and found it interesting that he was able to fool perceptions of those in the audience so easily.He finds magic performance helpful when teaching Plato’s metaphysics. “Socrates argues that the phenomenal world, or world of appearances, is less real than the realm of the ‘shapes’ or ‘forms,’ which can only be grasped intellectually, in thought,” he says. “So I use magic to show how precarious our hold on reality really is, when we rely exclusively on our senses”.