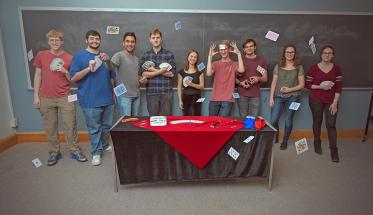 Ever wonder just how magicians manage to be so, well, magical? Wish for the chance to get an inside scoop on how they pull off those sleight of hand tricks that we all love so much?

Pick a card, any card.

Okay, okay, we know magicians never reveal their secrets, but a few members of one of WPI’s newest clubs, the Society of Magicians, are willing to share some details on how the club came to be, and we think that’s just as good.

The society’s president, Emily Staknis ’21, began practicing magic ten years ago after receiving a small magic kit for Christmas. Although she was disappointed to learn that WPI didn’t have any sort of magic club when she arrived in 2017, she never really thought seriously about starting one herself until she attended a magic show on campus during Family Weekend. There, she met a fellow student magician who was already in the process of starting a magic club with another student, and the rest, as they say, is history.

Soon enough, the society began to take hold. Its membership currently sits at about 20 students, including Nicholas Maio ’18 (MS ME), who’s been a member since the society’s founding last year, and got involved after seeing a friend perform a trick.

“He amazed me with that trick, and it sparked my curiosity,” he says. “I wanted to give others that same sense of wonder, which is why I learned how to do magic tricks. Being a part of the society has helped me become a much better magician while gaining many new friends along the way.”

“As a performing magician myself, I’ve been especially pleased to be advising this club—it’s certainly the most fun I’ve had as a faculty advisor,” says humanities and arts associate professor John Sanbonmatsu. “Magic is a performance art dating back thousands of years—club members are therefore working with esoteric principles and practices that have been utilized by conjurors literally for centuries.” 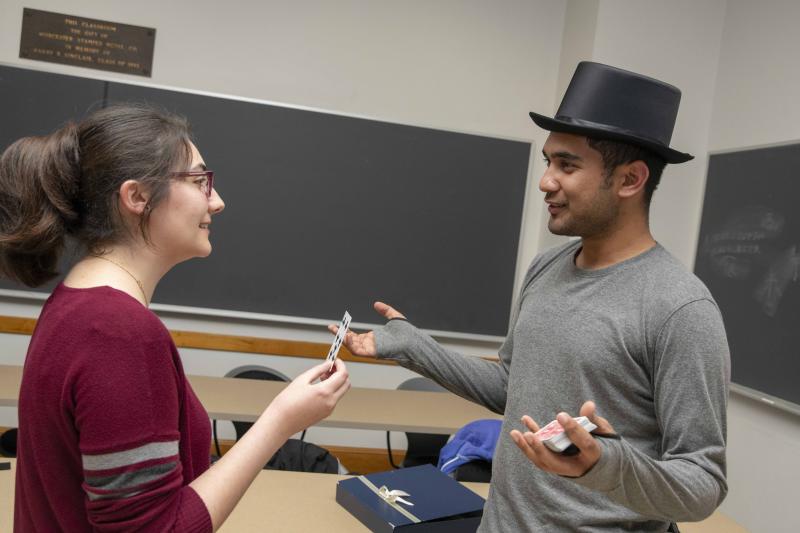 It’s not as exclusive as the Magic Castle in LA, but that’s exactly how the members want it. It doesn’t matter whether students have the skills of Shin Lim (Maio’s favorite magician due to his highly visual style) or Gob Bluth—all are welcome to join. The society’s website offers members weekly inspiration videos and a variety of card tutorials and tricks, with the only caveat being that practice is required, but fellow magicians will be there for support every step of the way.

Staknis says that the reception on campus so far has been great, adding that in addition to meeting original club members when table sitting in the Rubin Campus Center, she regularly runs into new magic enthusiasts, as well. “People at WPI really like seeing magic. Every time we’ve performed, other students always seemed very excited.”

There will be plenty of chances for magic enthusiasts to catch the society in action this term: new members will be performing in the campus center (times to be determined, so keep your eyes peeled), and the entire society is planning a show in the Goat’s Head for the end of the term.

Interested students may contact the society for more information on meeting times and locations—no doves or rabbits required.

What Tricks Do WPI's Magicians Have up Their Sleeves?