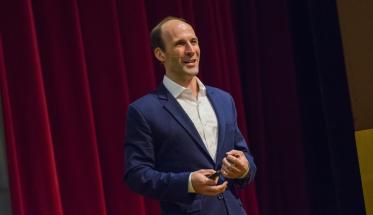 Lecturing to a full hall of mostly “techies” in Alden Memorial on Pi Day, Scott Hartley quoted investor Mark Cuban in proclaiming, “I personally think there’s going to be a greater demand in 100 years for liberal arts majors than there were for programming majors and maybe even engineering.”

Hartley, a venture capitalist and start-up advisor, gave a talk, titled “Technology and Humanities: Building the Leaders of the Future,” as part of WPI’s University Lecture Series. 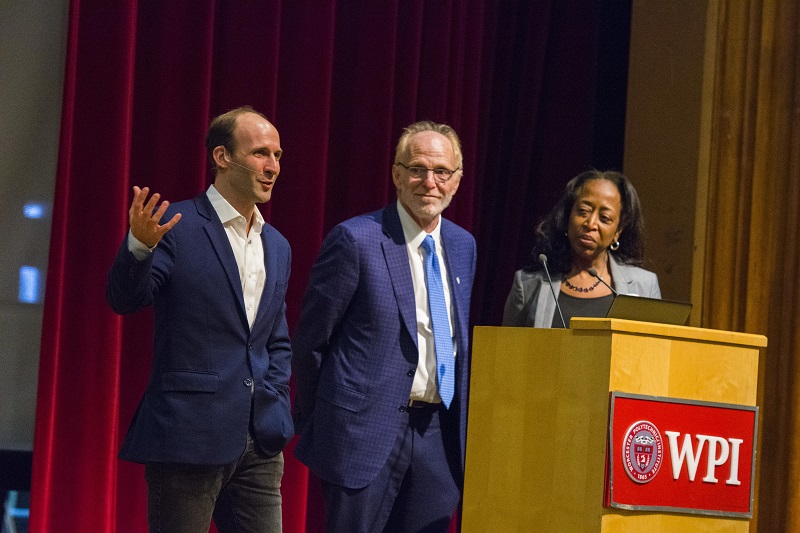 The author of the best-selling book The Fuzzy and the Techie: Why the Liberal Arts Will Rule the Digital World, Hartley spent the day on campus March 14 and joked that he was “happy to say I didn’t get hit in the face with a pie.”

In talking about the relationship between technology and the humanities, and why studying the natural world and human condition is relevant to STEM studies, Hartley—who previously worked at Google, Facebook, and Harvard's Berkman Klein Center for Internet & Society—cited authors of books that blur the line between the sciences and the humanities, including E. O. Wilson, author of The Origins of Creativity, and Carlo Rovelli, author of Reality Is Not What It Seems.

Blending sciences and the humanities is not a new concept, Hartley said.

“Before Elon Musk, we had Goddard,” he said, referring to Robert Goddard ’08, professor, physicist, and inventor of the world's first liquid-fueled rocket. "And in 1959, Charles Percy Snow talked about the tug of war and growing chasm between the sciences and humanities," he added.

Fast forward nearly 60 years: At WPI and other centers of technological research, including in Silicon Valley, people are having conversations about how to reconcile artificial intelligence and ethics.

When focusing solely on STEM and the importance of learning to code, Hartley said, people lose the human context and are living in a two-cultured world—a dichotomy that still exists and is seen at some Silicon Valley start-ups.

He recalled that while attending Stanford University fellow students often used the terms “fuzzies" and "techies” when referring to those interested in the humanities and those taking tech classes—a reference to his book's title.

“If you come to school having real passion and curiosity, that is something that will still be relevant your whole life.” -Scott Hartley

But they are not mutually exclusive, he said, and it is necessary to walk both lines.

“The world is fairly fuzzy,” Hartley said, but it is easy to get caught up on the fast track to wealth and fame and just study the tech path to become part of the world of Facebook’s Mark Zuckerberg and others, he said.

He examined the question of how to build leaders of tomorrow.

When college students studying STEM are looking at jobs and opportunities, they often ask themselves if they are studying the right thing and if it will be relevant in 30 years.

“If you come to school having real passion and curiosity, that is something that will still be relevant your whole life,” he said, adding that persistence and curiosity are the two drivers of success. 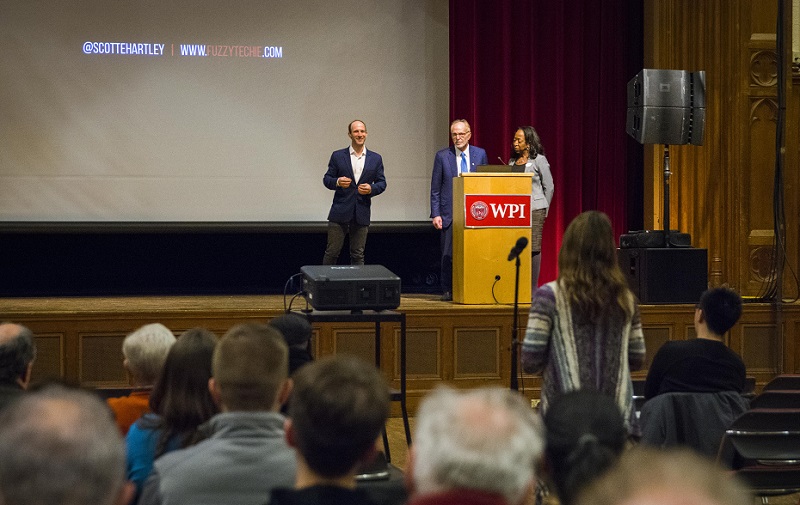 A lecture attendee stands to ask Hartley a question.

He encouraged them to think about education in terms of a passport, not a plane ticket, in seeking opportunity, and to get out of their comfort zone and study subjects outside of STEM disciplines.

“Technical literacy is necessary, but not sufficient,” Hartley said. Soft skills such as empathy, communication, collaboration, and curiosity are key, he said. “The most important things to teach our kids are love, emotions, and values.”

He also addressed ethics surrounding artificial intelligence and the importance of keeping advancements in technology human-centered, posing the question, “What are we optimizing for in our technology?”

He talked about “the ethic of nudge,” and gamifying apps. For example, are behavioral interventions to nudge people off the couch through technology and group dynamics ethical if they can potentially keep millions of people from developing obesity-related diseases like diabetes?

He talked about the ethics of designing technology to hook people into such apps that are gamified and potentially addicting, but serve to “nudge” them toward better health.

A believer in blending humanity and machine, Hartley sees technological advancements in robotics taking over routine, manual tasks and some cognitive, repetitive tasks, but the human element for non-routine complex tasks that require improvisation and creativity will always be needed.

Even in the realm of big data, which at first glance might seem unconnected with the humanities, Hartley argued that people are needed to ask the right questions.

“Data is not the same as knowledge or wisdom,” he pointed out. “Even with a million sensors, we still have to have people asking the questions” to have big data become smart data.

“Judge a man by his questions rather than by his answers,” he said, quoting Voltaire.