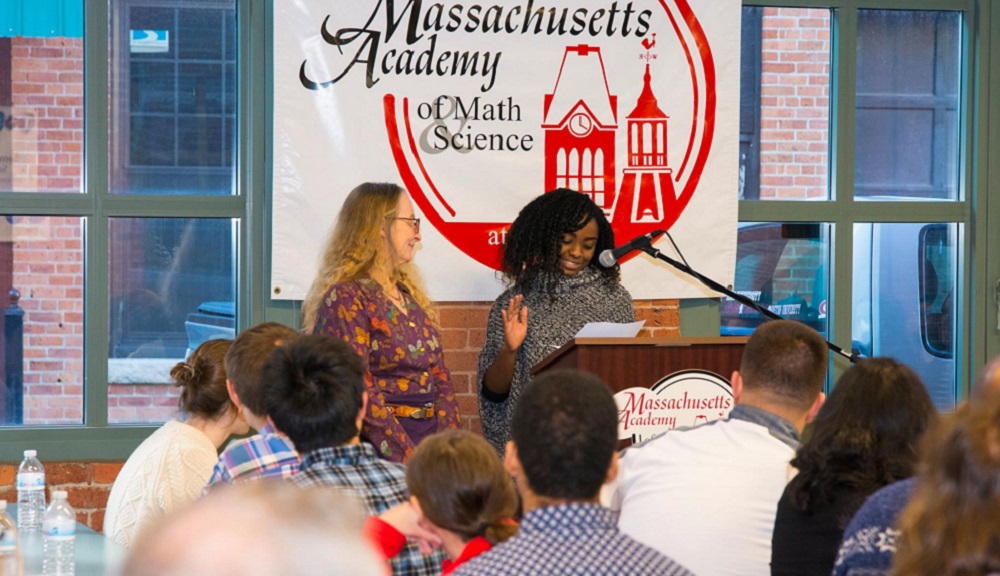 Surprise gift of $2,800 for teacher from Puerto Rico for supplies and rebuilding her damaged school

A cafeteria full of junior-year students at the Massachusetts Academy of Math & Science, some fidgeting nervously, sat awaiting their individual turns to speak. This was at the annual Teacher Appreciation Luncheon – a 20-year tradition of saluting the teachers who motivated the students to take an early interest in learning.

From a track coach who always went the extra mile for his students, to the teachers who taught life skills lessons that went beyond the classroom, the students wrote to their mentors and invited them to this event to publicly recognize their influence.

According to Mass Academy director Michael Barney, the school serves students from 70 communities across the state. About 200 students apply every year to this public school, but only about 50 are accepted. “Teaching is a business where you don't know where your influence has reached,” Barney says. “It's nice for them to hear that their efforts are appreciated.”

On a tour of the facility, student Shreya Bhattacharjee explained that the focus at the school is not simply on pure science. Students are allowed a wide range of possibilities in coursework, ranging from computer programming and cybersecurity, to biotechnology research and mock trials using information gathered in actual lawsuits. She said that languages and humanities have their place in the curriculum, too. But this junior's main interests include math modeling and the investigation of the relationship between proteins and cancer cells. Other students have individual specialty projects that include computer-aided design and 3D modeling and printing. Various prototypes of prostheses that have been designed at the school are on display.

During the ceremony, the students heaped praises on their early role models. Most students remarked on the enthusiasm the teachers first sparked in them. Many admitted that they weren't initially fans of the teachers’ particular courses, though they were eventually turned around by their teaching style or by the individual attention they received.

Several of these celebrated teachers could not be present for the lunch. Some sent notes of praise, which were read with gusto by the Academy staff.  Knowing that his student had a sarcastic attitude, one teacher wrote that the school's janitor had to remind him that he was supposed to have written his letter of praise. Another absent teacher wrote that he had two rules for his students – Rule Zero was “Respect.” Rule One was “Don't miss class.” In effect, he had written his own excuse for his absence from the afternoon event.

Generally, the teachers were not offered the opportunity to respond. The luncheon is the opportunity for the students to give testimonials. But, when one student repeated a quote that he remembered from his honoree—“Be the wheat, not the chaff!”—the teacher could not hold in her response: “That's the quote you took away from my class?”

Speaking before the ceremony, Auburn Middle School math teacher Michele Carpenter said of her former student, Eliana Palumbo, “She was an obvious top-notch student. She was always thinking outside the box, and her mind was always going. She was a teacher's dream.”

Academy student Sydney Hobson nominated Erin Mulcahy, her 6th grade math teacher at Dudley Middle School. Hobson had heard about WPI from her involvement with Camp Reach – a two-week residential STEM program at WPI designed to introduce girls to the possibilities of a science career. Mulcahy said that Hobson stood out because she was “driven, talented, and humble, and had always exceeded expectations.” Mulcahy noted that she had been shocked and flattered to receive the notice of this honor. When Hobson spoke, she credited Mulcahy with breaking her out of her “shy shell.”

While many of the teachers came from a distance, one of the honored guests, Teresa Mendoza, arrived from Puerto Rico on the invitation from her student. Mendoza is a science teacher who inspired Andrew Yuan in Dorado, a coastal town in Puerto Rico. She taught him in all of his science courses in grades 3 through 7, and is also the sponsor for the school Science Bowl teams. She even brought STEM-minded students together in meetings by Skyping in evenings and on weekends.

“Teaching is a business where you don't know where your influence has reached. It's nice for them to hear that their efforts are appreciated.” -Michael Barney

When asked about Yuan, she said that even as a very young student, he really took to the STEM, robotics, CAD (computer-aided drafting), and engineering parts of his education. She said that his success in Massachusetts has inspired other youngsters in Puerto Rico. “He has become a role model for younger students by leading by example,” she said, adding that students back home were excited when they heard that she would attend this event. “He had a dedication and a desire to learn,” she said. “His motto seemed to be, 'Let's go get it!'”

“I never knew that I enjoyed it!” said Yuan when asked about science. He said that through her efforts, he had acquired the necessary process of learning, which would be a tool helping him to move forward into the future.

When Puerto Rico was devastated on Sept. 20 by Hurricane Maria, neither the school, nor Mendoza's home or neighborhood, was spared. “Everything is destroyed,” she said. Now, two months later, she said that electricity and water are yet to be restored. In the mountains, the roads and bridges are impassable, isolating the elderly and poor populations from food and other resources. Her weekends have been spent on the western part of the island helping those people recover.

When Yuan nominated Mendoza as his inspirational muse, he had no expectation that she would actually be able to attend the ceremony. So he proposed that the Academy community donate funds to his former school as a show of support. When she accepted his invitation to attend, the Mass Academy community was thrilled and responded in force. Yuan was able to surprise her in person by presenting Amazon and Visa gift cards totaling $2,800, which will go toward purchasing supplies for the students and teachers at the school.

To see Andrew succeed at the Academy has been a thrill for Mendoza. She exclaims, “It has been a dream come true!”

The honored teachers are listed below, with the students who nominated them and their respective schools.