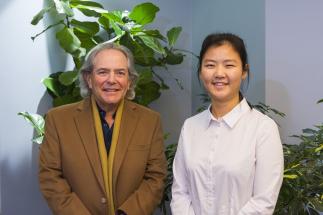 A recent graduate in Robotics Engineering at Worcester Polytechnic Institute (WPI) has won first place honors in the competition for the 2017 Kalenian Award, the university’s top prize recognizing commercialization potential for a given invention.

Weijia Tao ’16 won $10,000 for her invention, a soft robotic hand that can be placed on existing robot arms and used to pick and pack products from warehouse shelves.

“There’s nothing on the market like this product right now serving the picking and packing area of robotics,” said Tao, a graduate student researcher working with Cagdas Onal, assistant professor of mechanical engineering, to 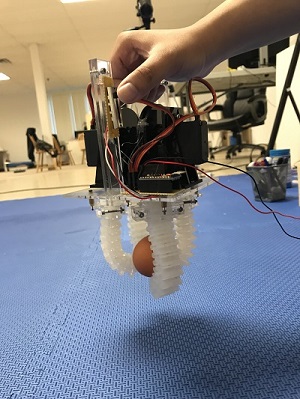 This soft robotic hand developed by
Weijia ​Tao can pick up an egg for
picking and packing operations.

commercialize their invention. The robotic hand has broad application areas ranging from order fulfillment in e-commerce/warehouses to picking and packing operations for fresh produce.

The Kalenian Award, a competition established in 2006 by Alba Kalenian in memory of her late husband, inventor Aram Kalenian ’33, supports innovative ideas or the development of commercial products. The 2017 awards were presented by their son, Paul Kalenian, during a ceremony recently at WPI’s Rubin Campus Center.

Prior to announcing the winners, Kalenian noted that it takes education, observation, and imagination to become an innovator. “What I look for in this program is an idea that has a market that can expand to other markets that can employ people,” he said. “Because at the end of the day, not everybody has the education, the observation, and the imagination to become entrepreneur inventors.”

Tao said she plans to spend the prize money on components to continue to develop the robotic hand. “This is our very first prototype,” noted Tao, “so we’d like to make it more adaptable to other robotic arms. We’d like to be able to sell it to small businesses and warehouses.”

Tao is part of PowerHive LLC, a startup company based in Natick, Mass., which is developing safer, softer, and smarter robotic solutions to everyday problems.

Meanwhile, the second-place finishers have created a product that can help rowing teams of all levels improve their race times. The team has developed a product that records and displays both the force and angle of a rower’s oarlock, which is mounted to the boat. Shrives, who is majoring in robotics engineering, is working on the product hardware while Winsor and Robbertz, both majoring in computer science, are analyzing data. Based on the data, the coach can make adjustments to the team and potentially improve their performance.

“Most races have between 200 and 500 strokes,” said Shrives. “If you can make a tenth of a second change to every stroke, it makes a very big difference at the end of the race.”

Current systems on the market cost about $1,000 per rower in the boat, the team said. However, they are exploring charging $100 per person in the boat for their product. 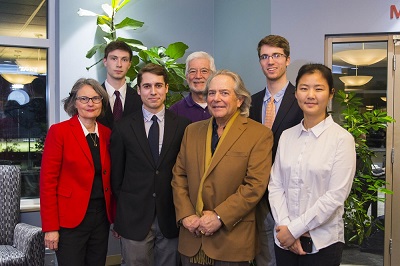 Stabile, the third-place finisher, plans to use additive manufacturing materials—more commonly known as 3-D printing—to develop a planar home speaker design. “I’d like to do with speakers what Samsung did with TVs: make them thin and against the wall,” said Stabile, who retired from Bose in 2015 as a senior engineer before joining WPI.

Stabile said a “lot of companies are chasing this” idea but are not using additive manufacturing in their products.

“My hope is using additive manufacturing will unlock some different approaches to speaker design that have not been tried yet,” he said.

Gina Betti, associate director of the Collaborative for Entrepreneurship & Innovation at WPI, who manages the Kalenian competition, noted that this year’s contest included 16 applicants vying for the prizes.