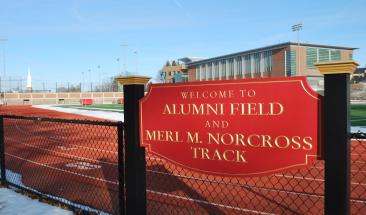 During 42 seasons as head track and field coach, he inspired hundreds of WPI athletes on the track that now bears his name 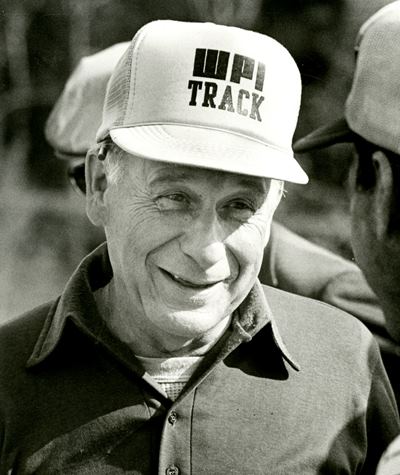 Legendary coach Merl M. Norcross, a longtime resident of Holden, Mass., died Jan. 7, 2017, at his home in upstate New York, after an illness. He was 89. In his five decades as associate professor of physical education, including 42 seasons as head track and field coach, he formed warm bonds and inspired generations of WPI students.

Merl Norcross arrived on Boynton Hill in the fall of 1952 as an assistant coach in football, basketball, and track. Under his leadership, WPI celebrated many winning and undefeated teams, and he counted eight Division III All–Americans among the students he coached. The Engineers posted a winning record in each of his final 26 years as head coach, while amassing a .700 winning percentage during his entire standout career.

In 1953, he stepped up to replace head track coach Frank Sannela, who left WPI for a position as superintendent of schools in Oxford, Mass. In 1978 Norcross took the reins as assistant men's cross country coach, and in 1980 assumed head coaching duties. In all, he spent 53 years with the track program, remained with the football program for 25 years, and assisted with basketball for 10 years. Highlights include serving as assistant to the undefeated football team of 1954, and assisting the basketball team’s stand against Bob Knight in Knight's first career victory in 1965. He also served on the NCAA Track and Field Rules Committee for seven years.

Beloved by students, Norcross was tapped for Skull with the Class of 1960. He was inducted into WPI's Athletic Hall of Fame in 1986, and was honored as Division III New England Coach of the Year in 1987.

In fall 2007, when WPI dedicated the newly renovated Alumni Field complex, the eight-lane, state-of-the-art synthetic turf track was named for the longtime coach, in at halftime ceremony during the Homecoming game. The previous track had been installed in 1987. In the early years of his career, Norcross could be seen each spring working alongside groundskeepers to drain puddles and patch the turf.

His steady, low-key devotion to his students was captured in a 1990 WPI Journal story on the Institute's longtime coaches, called “The Secrets of Their Success.” He said, “I have something to say to every kid, every day. That makes them feel that it’s important that they’re there.” In a 1987 profile in The Wire, a tabloid published by WPI, he elaborated on the importance of a “sensible” athletics program for WPI, one that keeps athletics as an adjunct to academics. “Here, you know students compete because they want to, not because they may have financial obligations to fulfill,” he said, adding that although good coaches don’t win all the time, they do get the most out of their players, through perseverance. 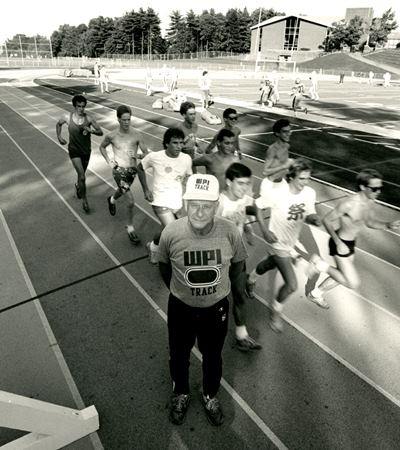 Norcross in 1987 with some of the hundreds of track and
field athletes he coached at WPI over his career, on the
track that would be named in his honor two decades later.

​Merl Norcross was born in Kingston, Pa., in 1927. He graduated from Kingston High School in 1945, lettering in football, basketball, and track. His impressive record in low hurdles earned him a place in the Northeast Pennsylvania Athletic Hall of Fame. He was awarded a full football scholarship to the University of North Carolina at Chapel Hill, but was drafted during his freshman year. He served the U.S. Army in the Pacific theater during in World War II. On completing his service in 1947, he returned to UNC, where he subsequently lettered in football and track. He was part of the university’s 1948 Sugar Bowl Team and a member of the 1949 Cotton Bowl team, joining the triumphant Carolina legacy that included Charlie "Choo Choo" Justice.

He graduated from North Carolina in 1950 with a bachelor’s degree in education and an MEd in 1951. As a graduate student, he was inducted into the national education fraternity Phi Delta Kappa. Before he came to WPI, he coached at high schools in North Carolina.

Norcross retired from WPI in 2004, but within a year was back in action, assisting with the Bancroft School’s track and cross country teams. He remained close to his WPI colleagues, visiting frequently and calling to congratulate them on the teams’ performances, or just to talk shop.

On the dedication of WPI’s new field facilities 2007, director of physical education Dana L. Harmon offered this tribute. “Merl Norcross has been an icon in the sport of track, working to develop young men and women to reach their potential in all they do. Our entire WPI community, especially the alumni who hold Merl near and dear to their hearts, are thrilled that this honor is being bestowed on him. He is a true gentleman and so deserving of this honor.”

Harmon notes that his legacy includes hundreds of young men and women that he helped help reach their full potential as athletes, students, and people. “We will miss his wonderful wit, laugh, and smile,” she says. “He remained actively engaged with WPI Athletics through our Poly Club as an executive committee member and his regular attendance at our numerous events.”

Whenever I speak with alumni the first question out of their mouth is ‘How's Merl?’ He meant so much to so many generations who came to WPI and wore the uniform.

Track and Field coach Brian Chabot says, “This is a loss that will be felt for a long time, not only for the athletics programs, but by WPI in general. Whenever I speak with alumni the first question out of their mouth is ‘How's Merl?’ He meant so much to so many generations who came to WPI and wore the uniform. It's clear his impact on their lives was significant and life-lasting.”

Chabot recalls coming to work and finding envelopes full of newspaper clippings on high school athletes that Norcross recommended recruiting. “He would call me to congratulate on a strong competition or just wanting to talk about the current athletes we had on the team. I enjoyed those moments because it was clear how much he loved the sport and how much he loved his connection to WPI. There will not be another person like him, and while the outdoor track is already, fittingly, named after him, I hope we can find other ways of honoring the man that gave so much of his life to WPI athletics.”

“Merl took me under his wings when I got to WPI,” recalls fellow Hall of Fame Coach Phil Grebinar. "We shared a lot of the same philosophies, and I always admired how hard he worked. You will not find a more fair or honest person and his commitment and loyalty to WPI is unchallenged."

Norcross leaves his wife of 50 years, Sandra (Higgins) Norcross; his two sons, Christopher Norcross of Brant Lake and Jeffrey Norcross of Rochester, N.H.; four grandchildren; and a sister. He was predeceased by his two brothers.