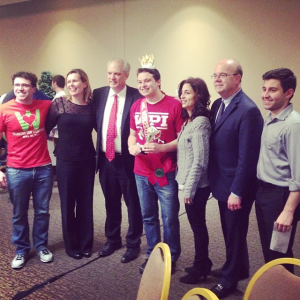 When Taylor McNally saw the Worcester Student Government Association’s email seeking applicants for Worcester’s first-ever Mr. Worcester pageant, he didn’t think too much of it.

“But then a bunch of my friends started texting me,” says McNally. “After thinking about it, I thought I had a good shot at it, and it was for a good cause.”

So when McNally’s poise, charisma, and singing talent landed him the title of Mr. Worcester in January, he was pleased with the win, excited about the fundraising efforts, and particularly happy to represent his school. “I wanted the trophy to come from WPI,” says McNally. “I wanted to take it home for my school.”

The contest, held at Coral Seafood restaurant on Shrewsbury Street, was a fundraiser for Working for Worcester, a nonprofit under the umbrella of Students Helping Children Across Borders that encourages city-wide collaboration of student, community, business, and government organizations. The seven contestants represented WPI, Clark, Becker, Assumption, Holy Cross, Anna Maria, and Massachusetts College of Pharmacy and Health Sciences.

According to Christin Di Scipio, director of public relations at Working for Worcester, the event raised more than $4,000 for the organization. “This was really fun,” she says. “We wanted to get as many people from the community involved as we could.” She hopes this becomes an annual tradition.

Friends and family paid admission to cheer on the contestants in the various talent, formal wear, and interview portions of the evening. McNally ’14, a mechanical engineering major and the third in his family to attend WPI, says his mom and dad even came from Rhode Island to sit in the front row.

I love WPI and learned so much here.

He says the process of sending in photos, a bio, and answering questions about why he would make a good Mr. Worcester wasn’t too tough. But when he found out just a scant week before the show that he was chosen to represent WPI, he had some quick preparation to do. But McNally, a member of VOX, is a singer with experience in musicals and a cappella, so he knew he would showcase his voice. His Tau Kappa Epsilon fraternity brother and friend Bipul Pyakuryal offered to accompany him on the guitar for McNally’s version of the Bruno Mars song “When I Was Your Man.”

The on-the-spot questions were fun. The first one—how would he would help the environment in Worcester?—was answered with a shout-out to his school and all the environmental engineers he could recruit for help (for good measure, he added that he’d work for world peace). His answer to the second question—did he believe in love at first sight?—was a quick “Yes!”

Worcester’s mayor Joe Petty was one of five pageant judges and was impressed by the collective student spirit evident that night. “I thought it was a wonderful event,” he says. “It was great to see 400 or 500 college kids at something other than a sporting event in downtown Worcester.”

Petty says McNally edged out the others with his talent and his poise. “He was confident, funny, and had a good voice. This was a good event to raise money for Working for Worcester, and I hope it continues.”

The newly crowned Mr. Worcester says he was happy to bring WPI a new title. “I love WPI and learned so much here, both academically and with interpersonal skills,” he says, noting that he finds the constant team work invaluable.

“This was a really fun experience,” says McNally. And he finds it easy to talk up Worcester’s good points. “I am obsessed with Shrewsbury Street and all the different restaurants. Worcester is a great city.”