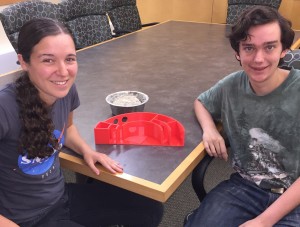 Worcester Polytechnic Institute is no stranger to NASA’s Centennial Challenges. Since 2011 the university has played host to the Sample Return Robot Challenge and in 2009 a WPI team won first prize in the Regolith Excavation Challenge. Now two more WPI students are looking to continue the tradition.

Sarah Chamberlain, a senior robotics engineering major, and Richard Eberheim, a junior also majoring in robotics engineering, are competing in the 3-D Printed Habitat Challenge. The mission of this Centennial Challenge is to design and build a 3-D printed house for deep space exploration, including NASA’s journey to Mars.

We’re going up against a lot of good teams … but many of them are focusing on the design aspect and not thinking about the feasibility of the structure. If they had to actually build it, could they do it?
Richard Eberheim ’17

“As soon as I heard about this new challenge I thought this is exactly what I want to do,” says Eberheim, president of WPI’s Collab Lab, who has been studying NASA’s mission to Mars since high school. Fortunately, he didn’t have to look far to find the perfect partner for the project. Collab Lab vice president, Sarah Chamberlain, had already been researching ways to make a huge livable structure using a 3-D printer. “People would ask me, ‘why do you want to do that?’ says Chamberlain. “I told them I thought it would be cool, but now I have an actual reason.”

IF YOU BUILD IT …

The NASA- and America Makes-sponsored challenge is designed to advance the technology needed to create sustainable housing solutions for Earth and beyond. Last year, the Made in Space Challenge not only sent a 3-D printer into space for the first time, but allowed for objects to be printed on the International Space Station. This competition takes printing to the next level, calling on participants to develop state-of-the-art architectural concepts that could someday be constructed in full-scale using a 3-D printer and indigenous materials.

According the press release announcing the challenge, “Shelter is among the most basic and crucial human needs, but packing enough materials and equipment to build a habitat on a distant planet would take valuable cargo space that could be used for other life-sustaining provisions.” Put simply, there’s not enough room on space crafts to ship construction materials. And who would build the houses in space? The 3-D printed habitat challenge looks to solve that problem. 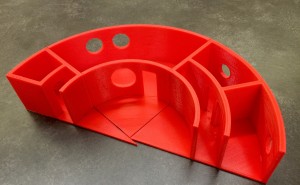 Chamberlain and Eberheim spent the summer working on ideas for the project—not an easy task with one on campus and the other in Virginia. Through countless emails, however, the design took shape and they submitted their proposal to NASA in August. Just a few weeks later, they were told their unique donut-like structure landed them a spot as a finalist in the international competition. This weekend (Sept. 26–27), the project of these WPI students, who have taken on the name Team A.R.C.H., will be among the top 30 submissions on display at the 2015 Maker Faire in New York Cty. The teams will be judged and a prize purse of $50,000 will be awarded.

“We’re going up against a lot of good teams supported by corporations and other industry leaders, says Eberheim, “but from what I’ve seen, many of them are focusing on the design aspect and not thinking about the feasibility of the structure. If they had to actually build it, could they do it?”

Reluctant to give away too many details about the concept at this stage of the competition, Team A.R.C.H. is confident it has thought about all aspects of the project. Chamberlain and Eberheim are using an approach similar to a Skycam in which the printer could be mounted above a building site to produce the structure. To simulate the soil on Mars, they are using ground-up kitty litter mixed with water to test its strength and durability.

In addition to the expert judges who will choose the winners, there will also be a people’s choice award. Visitors to the Maker Faire can vote on which project they would like to see in space. Team A.R.C.H. is asking anyone who will be at the Maker Faire on September 26 or 27 to stop by their display booth, say hi, and vote for them.

NASA and America Makes have not said how many teams will move on to the next phase of the three-part challenge, but the WPI students are hoping they are among them. The next phase involves first making the technologies needed to manufacture the structure, and then actually fabricating the full-scale habitat using materials indigenous to the home planet.

Chamberlain and Eberheim say their best moments of this challenge so far have been making it to the finals and seeing the printer bring their idea to life in small form. But they admit the possibility of actually constructing their design in space is truly out of this world.