Spirits of the Bard

Shakespeare, Not Stirred: Cocktails for Your Everyday Dramas 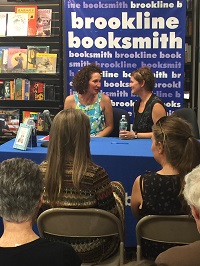 What do you get when you mix Shakespearean scholarship with liquid refreshment and add a dollop of fun? Shakespeare, Not Stirred: Cocktails for Your Everyday Dramas, a new book by WPI associate professor of English Michelle Ephraim and her friend and colleague, Caroline Bicks, associate professor of English at Boston College (Penguin, Sept. 2015, 155 pp.)

The book blends characters, quips, and a liberal dose of puns (chapter heading: “Shall I Campari to a Summer’s Day?”) with mostly everyday ingredients to create cocktails you can enjoy after a hard day on life’s battlefield (“Richard’s Gimme-Let”), when celebrating Junior’s graduation (“Prince Hal’s Tequila Son-Rise”), or at a beachside gathering (“Viola’s Salty Dog”).

There’s also food for thought and eating as Ephraim and Bicks provide hors d’oeuvres recipes to serve, as an aside. Here again, wordplay is the thing: there’s a recipe for “Crudite of Errors” featuring twin dips to complement the twins-themed play, and a basic bread called “Romeo’s Loaves at First Sight.”

Ephraim says Shakespeare’s humor inspired the book, as well as how much the plays’ human interactions are as relevant today as 500 years ago.

“What I have found is that my students, like all people who experience Shakespeare, get excited about the personal connections and the human experience [in the plays]. They really get pleasure out of them, sometimes laughing, sometimes just experiencing that moment when a writer is able to capture an emotion so poignantly,” she says.

Case in point: Celia and Rosalind’s relationship in As You Like It. “Everyone can relate to when a friend has a boy she’s interested in and that’s all she can talk about. You’re tagging along and you know she’s going to dump you as soon as she finds him, but you’re still loyal,” Ephraim says, explaining how the recipe for “Celia’s Kale Friend-Chips” came about.

“This book is very much in that spirit,” she adds. 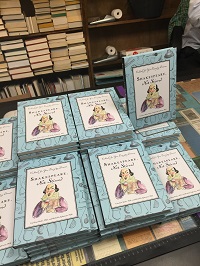 Both professors teach the Bard among other topics and have been friends since they met at a Shakespeare seminar at Harvard 12 years ago, says Ephraim. The book emerged out of their scholarship, collaboration, and the fact that they “love to eat and drink together.”

Although the authors are not professional mixologists, they both cook and entertain, serving drinks and dishes made with fresh, yet accessible, ingredients, says Ephraim. They spent hours formulating, testing, and naming each recipe, arriving at the finished products in different ways.

Sometimes they started with a really good pun and then invented a concoction to go with the title. Some recipes practically named themselves, like “Prospero’s Dark and Stormy” from The Tempest.

Other drinks evolved from the characters and the action, and all are texturally accurate, says Ephraim. For example, Hamlet makes it clear that he doesn’t drink alcohol, so the authors created an appropriate hors d’oeuvre for his character and developed naming “Sex in the Breach” for the Dane’s frisky and vinous stepfather, Claudius. 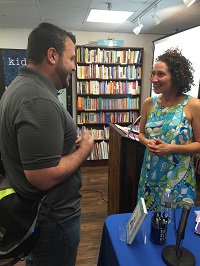 “We really labored over these. Often we’d spend days on a single title and then have to scrap it and start again,” says Ephraim. “It’s like what we tell our students. Sometimes you have a really great idea but you have to cut it because it doesn’t work.”

But was all the work a labor of love?

Of course, being professors, the authors couldn’t resist including bite-sized portions of education, called “MiniBards,” in the book. But even these lessons, while accurate, are written with a wink and a cocked eyebrow. For example, a MiniBard about the background of Henry VIII begins, “Henry VIII broke the ManoMeter when he split from the pope and his first wife … all so he could marry his mistress.”

Ephraim says she sees readers using the recipes individually for everyday occasions or misadventures, or to stimulate conversation at a themed party, though not necessarily an academic one. Pointing to the number of Shakespeare’s expressions that are still part of popular culture, Ephraim says, “Honestly, Shakespeare is not for the elite—he wrote for everyone.”

Ephraim and Bicks will give a free talk about the book at the Folger Shakespeare Library in Washington, D.C. at 6 p.m. Friday, Sept. 25.