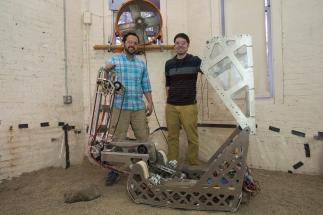 Despite having already received their diplomas at last weekend’s commencement, five newly graduated Worcester Polytechnic Institute’s (WPI) students are continuing their work on a robot that could one day collect soil and ice samples on Mars. The team will compete in this year’s Robotic Mining Competition (RMC) May 22-26 at the Kennedy Space Center in Titusville, Florida. Hosted by NASA, the annual contest gives college students from across the nation the chance to design, build, and operate robots that could help the agency meet its goal of sending humans to the Red Planet in the 2030s.

Recent discoveries by NASA missions to Mars have found large amounts of water in the form of ice and hydrated minerals. According to NASA, capturing this water is key to allowing humans to “live off the land.” The 8th annual RMC challenges teams to build a robot that can collect soil and ice samples below the surface and carry them back to a home base for further research.

For the competition, NASA has constructed a simulated Martian environment, including rock and soil material with properties akin to what is found on neighboring planets. The robots must mine for those materials while facing the type of software communications restrictions that would affect robots on Mars. By imposing such realistic conditions, NASA is looking to identify promising new technologies at the competition that could be employed on future missions as the agency works toward eventually sending astronauts to deep-space destinations.

“This is an intense project,” said team member Aaron Jaeger. “What we’ve found is there is a lot of work to be done to get to Mars.”

Jaeger, along with Domenic Bozzuto, Brian Peterson, Rene Jacques, and Jason Wu—all members of the Class of 2017—have been working on their robot since August. They developed the machine, which they named MARKHOR after a mountain goat from the Himalayas, for their Major Qualifying Project, which all WPI students must complete in order to graduate. The team says it was initially inspired by WPI’s award-winning robot Moonraker, which successfully completed NASA’s Regolith Excavation Challenge in 2009. Building on that design, they added a dynamic chain and constant collection system that allows the robot to extract soil 16 inches below the surface. The machine was custom-made to traverse the rocky and uneven terrain that exists on Mars.

“The biggest challenge was that every idea we had we had to then prove mathematically and also show how it could work on Mars,” said Bozzuto, who wrote the software program for the MARKHOR robot.

WPI’s team is one of 50 competing in this year’s RMC. The robots are scored in a number of areas, including effective communications, innovative design, and on-site mining capabilities. The top prize is a $5,000 scholarship which will be given to the school.

In addition to advancing space robotic technology, the event also is meant to spur interest in science, math, technology, and engineering education. The RMC has a community outreach component that asks teams to share their experience with younger students. The WPI team demonstrated the MARKHOR robot at a WPI campus event for accepted students this spring, encouraging future engineers to pursue hands-on project work. They hope another team from WPI will continue to develop MARKHOR in the coming years.

“Win or lose at RMC, hopefully this machine will live at WPI and be a model for future innovations,” said Bozzuto.