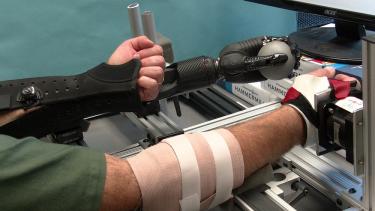 A research team at Worcester Polytechnic Institute (WPI) hopes to give hand-wrist prostheses the ability to move more naturally by enabling a hand and wrist to work simultaneously—known as two degrees of freedom—using electrical impulses generated by remnant muscles in the forearm. With traditional prostheses, only one element—either the hand or the wrist—can be in motion at any one time.

In part, the research is aimed at providing better prosthesis options for returning soldiers with amputations of the hand and wrist who have found it either difficult or impossible to perform a wide range of daily tasks with current one-degree-of-freedom hand-wrist prostheses. 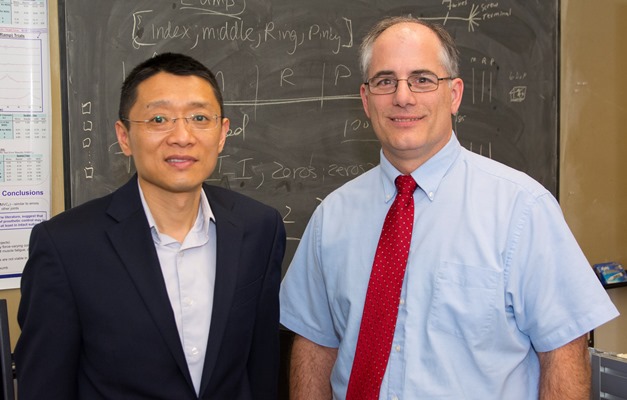 The research is being done by co-principal investigators Edward Clancy and Xinming Huang, both professors of electrical and computer engineering at WPI. Their work is funded by a two-year subaward of $712,812 from Liberating Technologies Inc. (LTI) of Holliston, Mass., a leading supplier of upper-limb prosthetic devices for adults and children. The National Institutes of Health has given LTI a $1.4 million grant to help solve these problems.

The researchers say their goal is to make it possible for hand-wrist prostheses to more closely duplicate the natural synchronized action of the human hand and wrist. When reaching for a glass of water, for example, the wrist turns to align the hand while fingers spread to encircle the glass. For an upper-limb amputee using existing prostheses, that simple action is far more cumbersome.

Clancy, director of WPI’s Laboratory for Sensory and Physiologic Signal Processing, is responsible for system design and developing advanced control algorithms for device operation, while Huang works on instrumentation and signal processing. They are conducting the research at both WPI and LTI.

The work is currently focused on how to translate signals picked up from muscle activity in the forearm into appropriate movements of the hand and wrist prostheses. They began by collecting data from 64 or more electrodes, but recognizing that a device with that many inputs could be burdensome or impractical, they are attempting to achieve the same effect with as few as four electrodes while also improving functionality.

“We want to be able to control two degrees of freedom while making instrumentation that is really tiny and easy to apply,” Clancy said.

The researchers are also developing new algorithms and methods to help select the optimal locations for the four electrodes. Those algorithms will be embedded into a microprocessor within a prototype prosthesis. The next step will be to develop a more convenient and robust multielectrode clinical prosthesis fitting system that will determine the optimal electrode locations and convert muscle activity into the movement of motors in the prosthesis hand and wrist components.

They will also seek to wirelessly connect the electrodes using embedded low-power integrated circuits and rechargeable batteries. The outcome of this research will provide more functional, convenient, and robust prosthesis options for patients with upper limb amputation injuries.

Clancy said potential users include those born without hands and individuals who have had traumatic amputations as result of gunshot wounds or car accidents. He also said there has been growing research to support returning war veterans with amputations.

“While this field is relatively small, there has been an increased research effort in recent years, particularly in response to providing better prosthesis options for soldiers returning from Iraq and Afghanistan with upper limb amputation injuries,” he said.

Todd Farrell, director of research for LTI, said the research has promise.

“This research is really exciting,” said Farrell. “If the technology is proved out, it would be a substantial improvement over the current state of the art. It would improve the speed and ease for amputees to perform a number of tasks.”

Ted Clancy was inspired by his early days as a WPI undergraduate. Read more in the Daily Herd.