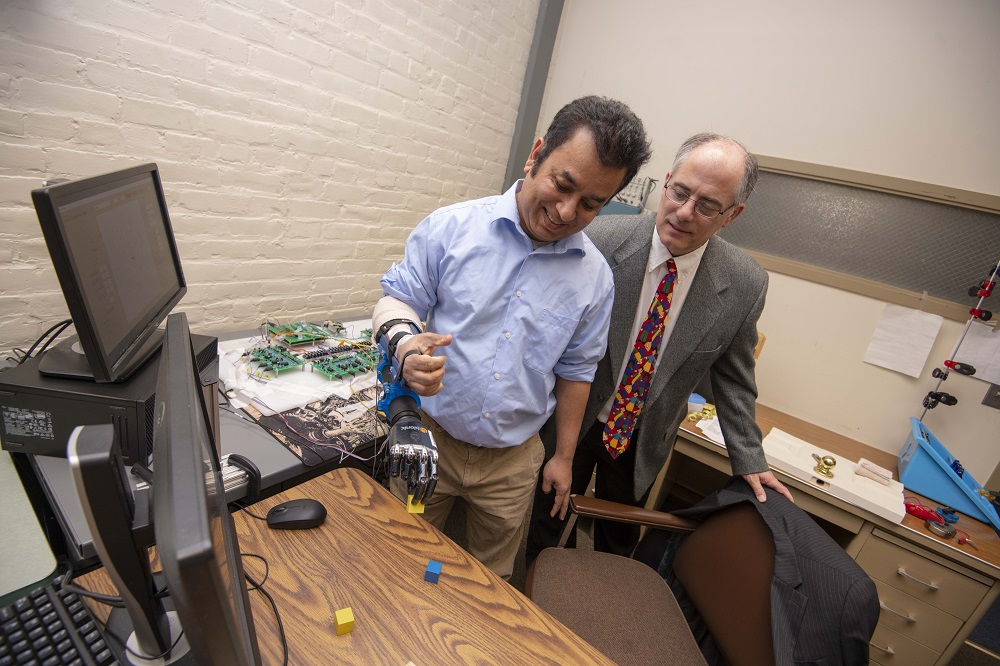 Ted Clancy (right), professor of electrical and computer engineering at WPI, is developing wireless sensors to communicate with a prosthesis.

A Worcester Polytechnic Institute (WPI) professor, a local prosthetics company, and an occupational therapist with limb absence have teamed up to develop wireless sensors to improve the performance of prosthetics for individuals with upper limb amputations.

“This wireless sensor technology will have a major impact for individuals with limb absence and allow them to control their hand and wrist prostheses,” said Ted Clancy, professor of electrical and computer engineering at WPI. 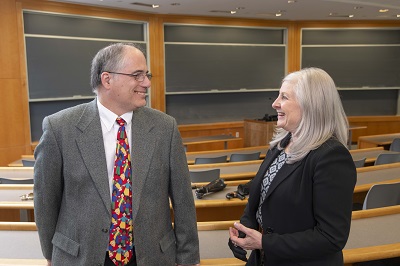 Professor Ted Clancy and consultant Debi Latour have been collaborating on prosthetics projects for five years.

Clancy is working with Todd Farrell, director of research at Liberating Technologies, Inc. (LTI) of Holliston, Mass., principal investigator on the grant, and Debra Latour, an assistant professor of occupational therapy in the Division of Occupational Therapy program at Western New England University. Latour, a consultant on the project, was born without a right hand. For this research, Clancy received a two-year, $400,000 subaward from LTI, which received funding from the Department of Defense.

Existing wired sensors detect the electrical activity of remnant muscle tissue in the arm—in a manner similar to how a cardiologist detects the electrocardiogram activity of a patient’s heart—and use this signal to control the movement of a hand-wrist prosthesis. Since most of the muscles that control the hand actually reside within the forearm, this technique is successful for many people with limb-absence.

In making the transition from wired to wireless sensors, researchers had to consider the structure of the overall prosthetic device. Historically, Clancy said, artificial limbs are attached to the body with a molded plastic socket that is form-fit onto the natural tissue. However, he noted, there is “recent movement in the field to move away from (a socket) and instead use what’s called osseointegration.”

Under the osseointegration technique, a prosthesis would be attached to a metal rod that has been surgically implanted into the bone. “So you no longer need a socket and have a much more rigid attachment, which is tremendously important,” said Clancy. “But now all of these wired sensors you would use to control the device have nowhere to go.”

This wireless sensor technology will have a major impact for individuals with limb absence.
-Ted Clancy, professor of electrical and computer engineering at WPI

In effect, Clancy said, wires would be hanging loose and could potentially become caught on objects and pose other problems.

To address the challenge, Clancy and his colleagues plan to place silver dollar-sized wireless sensors on remnant arm muscle locations. Clancy said they plan to start with two sensors, which could 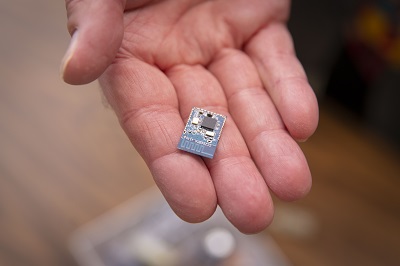 The wireless sensor is placed on remnant arm muscle locations.

expand to up to eight or more sensors primarily for better control.

“The idea is to create a standardized system that is more space efficient that could be readily adapted onto various products,” said Clancy.

Xinming Huang, professor of electrical and computer engineering at WPI, is focused on programming the sensors in order to optimize battery power. “We are looking for devices that are stingy in battery power so that (sensors) can be worn throughout the day,” said Huang.

The technology has exciting implications for Latour and legions of other individuals facing limb loss. “Having the opportunity to work with WPI innovators on cutting-edge technology for a unique population is exciting, and opens up possibilities,” said Latour.

Clancy, who directs WPI’s Laboratory for Sensory and Physiologic Signal Processing, and Huang are supervising WPI’s portion of the project. Graduate student Jianan Li is involved in the design aspects of the electronics, its programming, and getting multiple sensors to work together.

This research builds on previous studies conducted by Clancy and colleagues. Two years ago, the WPI research team collaborated with LTI to develop a more versatile hand-wrist prosthesis that would give users the ability to move more naturally by enabling a hand and wrist to work simultaneously.