New Voices 33 opens this week, and in the theatre world at WPI this is a major event. The festival features performances of original, unpublished scripts from a cross section of the entire community, from students and faculty to alumni and/or audience members—maybe even you!

This celebration of the stage is recognized as the longest continuously running collegiate new and original play festival in the country. Over the previous seasons, New Voices has produced more than 400 original plays by more than 200 writers. NV33 adds to that distinguished legacy with an outstanding lineup that’s sure to please even the hard-bitten critic. 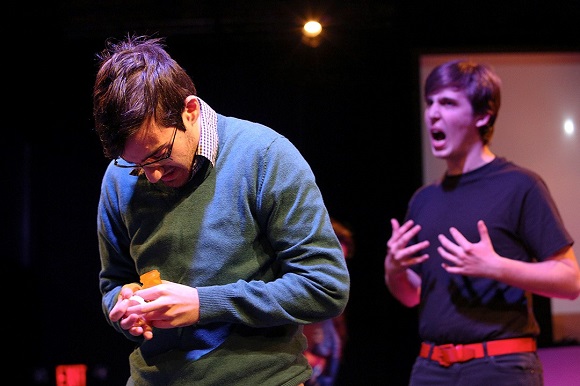 The following plays will be presented: Pre-Planning by Daniel Corwin and Christian Roberts; Tea Time by Katelyne Sibley; The Rower by Victoria Loehle; Me, Moi-Même, and I by Nicholas Medeiros; Exit by Nicolás R. Hewgley and Michael Goldman; The Sixth Experiment by Casey Broslawski; and Glass Adams’ Day Off by Ian Maitland and Mark Swanson.

“Mark and I originally wrote Glass Adams with the intent of injecting some more comedy into the New Voices festival,” says Maitland. “We actually wrote the play a year ago and submitted it for New Voices 32, but it didn’t get in. Luckily, a year later we resubmitted and now have the absolute pleasure of watching it come to life.”

What: Masque and the Department of Humanities and Arts Presents New Voices 33
Where: WPI Little Theatre
When: April 15–18 at 7 p.m.
Email: theatre@wpi.edu
Cost: Free

Maitland says the whole play was written as a parody of the James Bond series but with “a large, comicbook-style twist to a lot of the characters.” The authors’ description in the playbill reads, “Glass Adams, The world’s most handsome, dangerous, super-agent who could, if provoked, destroy the world within a blink of an eye. He has been feeling a little unappreciated at work. In this comedy, we follow our hero as he just tries to relax and read his damn paper.”

Involved with New Voices as an actor since his freshman year, Maitland, now a senior, has directed for the past three years, but this is his first time getting a play into the festival. He says the intent is purely for laughter. “We only wrote Glass Adams to be a hilarious comedy. There is no substance, no deep message, just humor. As far as the entire production is concerned, I really want the audience to just enjoy seeing the different stories told by the students here at WPI. We may be engineers, but there really is some spectacular talent here.” 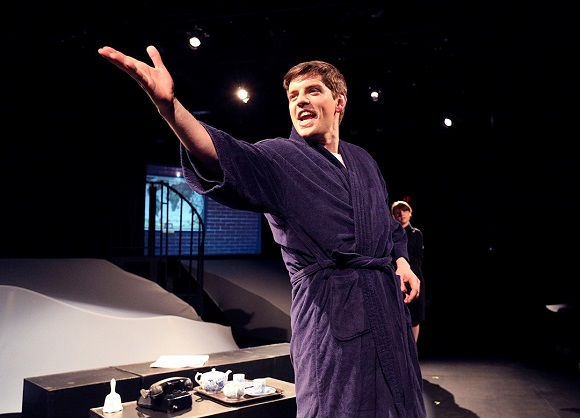 One of the special features of the festival is the interaction among young playwrights, actors, and directors. For example: Christian Roberts and Daniel Corwin wrote the play that Maitland will be directing and “they are directing the show Mark and I wrote,” Maitland says.

The Roberts and Corwin play is called Pre-Planning, billed as “Four criminals, after having completed their most recent robbery, prepare for a new heist over the course of three days. The heist promises a huge sum of money, but tensions form within the group, and growing suspicions about the group’s shady leader make emotions and jealousy run rampant.”

Like Maitland, Roberts has an extensive history in theatre at WPI. “Acting, directing, and now, I’m a playwright,” he says. “I was in the A-Term and B-Term shows freshman year, I directed a show in the last New Voices, and am directing a show for NV33 I’m also involved in the absolutely hilarious, knee-slappingly, finger-lickin’ comedy group Empty Set.

When asked what he would like audiences to take away from his work and the festival, he says, “In all honesty, Dan and I wrote our show mostly, if for any reason at all, to entertain. We want people to come in, watch New Voices 33, and come out satisfied, with that familiar and comfortable ‘Man, that was pretty good. Anyone wanna go for dinner?’ feeling.”