Not Your Typical Concert

Clarinets, violins, and trombones jamming to Bon Jovi tunes, Queen’s iconic Bohemian Rhapsody, and the Black Panther soundtrack might sound a little out-of-the box, but what’s summer without a little surprise? The WPI Summer Band Concert on July 16 offers these selections and more surprises at its annual summer jam.

When teaching professor and administrator of music Doug Weeks starts thinking about the WPI Summer Band, there’s no specific plan in place except to enjoy the process and present great music to the community. The band has been performing a signature concert every summer for the past 20 years or so, and each year is different.

“With the summer band, I never know who I am going to get,” says Weeks. With an assembly of current students, alumni, and faculty, he says the summer season is a time to loosen up and experiment with different types of music.

“The music is light,” he says. “It’s not the same intensity of music we have during the year. It’s more show tunes and light stuff and with a nod to pop culture.” 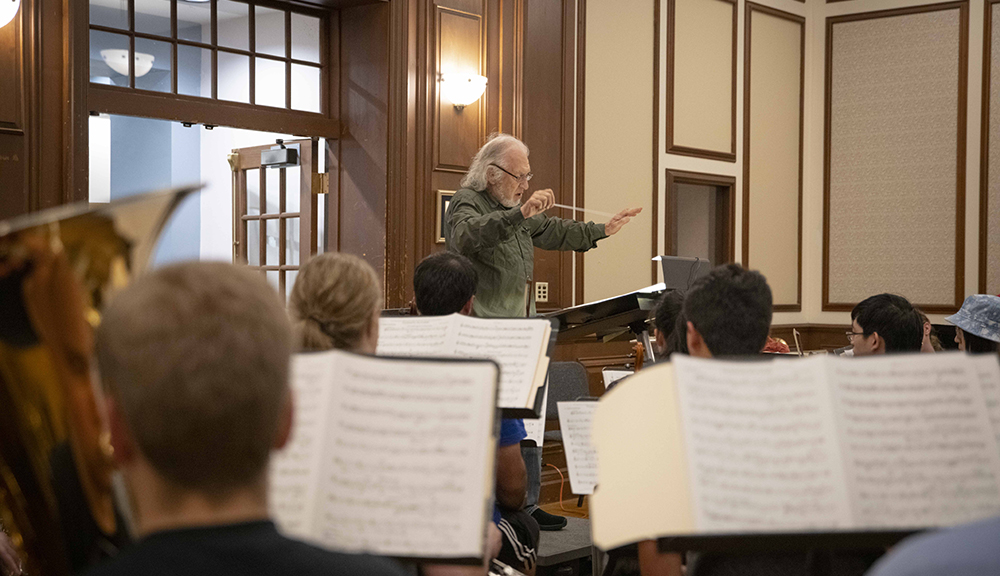 Every Tuesday night, the band members gather to rehearse and prepare for the summer concert, which this year will be held on Tuesday, July 16, from 7 to 8 pm on the Rubin Campus Center patio (rain location Alden Memorial) and attendees are treated to free ice cream. But really, say members, it’s also about just having an opportunity to play during what can seem like desert months for musicians who typically play during the school year.

After a timing conflict prevented Michaela Gamache ’21 from joining the summer band last year, she is excited to be a new band member. Gamache, who plays the flute and piccolo, says she misses playing music with others once classes are over. “I have been playing for nine years and in the summer it’s sad to lose the ability to play in organized bands,” she says.

The music chosen by Weeks brings an unexpected liveliness to the group. “We are practicing a Bon Jovi medley,” says Gamache. “And that might sound unusual, but everyone gets into the groove. It’s really fun. It’s a totally different experience to play like that and it’s fun to be able to do it.”

Joe Pisano ’88 joined the summer band five years ago when Weeks mentioned it to him. Currently also an Alumni Jazz Band member, Pisano played under Weeks and assistant teaching professor and director of jazz studies Rich Falco as an undergrad and he and Weeks frequently play gigs together. Playing in a summer band isn’t all that different from what he’s used to, he says, but the experience as a whole has been much more enriching as an alum.

Pisano says that although he is a professional engineer, playing music is a lifelong passion. “When you graduate, you lose touch with what it’s like to be at WPI,” he says. As a band member, he sits next to students and the natural conversation has been enlightening. “I ask them questions like if they were solving a computer problem, what language would they use,” he says. “I am always looking to interact with younger engineers. And it gives me a chance to come back for a while. It’s been a fantastic way to stay in touch with WPI.”

Going with the Flow

The final concert program often depends on who is in the band any given year and what instruments they play. “After the first week or two, we readjust,” says Weeks. The first rehearsal generally brings a core group of 15 or so players, but as the weeks progress, the assembled musicians approach nearly three dozen.

A blend of seasoned and newer players benefits the entire band. And, Pisano says, music is a great common denominator. He might not be familiar with the technology the students are discussing, but he knows the feeling of trying to play the exact same instrument perfectly. “They are using all this newer technology [in school] and yet they are struggling with musical instruments that haven’t changed in 300 years,” he says.

And there’s nothing quite like the ease of a summer band. “It’s fun for the students who stay on campus, there’s almost nothing going on,” says Weeks. “This is social and gives them something they can do.” Others who live within driving distance find the once-a-week rehearsals are easy to fit in, especially when they look forward to it so much.

“These are good players and this helps them keep it up,” says Weeks.

Gamache agrees. “People are looser and having more fun,” she says. “Everyone who is there just has a passion for playing. It’s what it’s all about.”