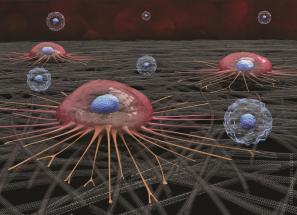 Using the tendency of circulating cancer cells to adhere to carbon nanotubes, the easily mass-produced chip captures living cells and cell clusters of multiple types and sizes with high reliability and makes them available for analysis. The chip could be used to detect tumors at the earliest stages, before they can metastasize.
Media Contact
Alison M Duffy
Executive Director of Strategic Communications
Marketing Communications
+1 (508) 8316656
media@wpi.edu
Illustrator
Curtis Sayers

Researchers at Worcester Polytechnic Institute (WPI) have developed a chip made of carbon nanotubes that can capture circulating tumor cells (CTCs) of all sizes and types, and can do so with far greater sensitivity than existing technologies. The unique design of the device makes it possible to easily identify and even culture the captured cells, which could make it possible to detect early-stage tumors, predict the course of a cancer, and monitor the effects of therapy.

Details of the new technology are reported in the journal Lab on a Chip (Liquid biopsy using the nanotube-CTC-chip: capture of invasive CTCs with high purity using preferential adherence in breast cancer patients) by a team consisting of researchers at WPI, the Department of Neurological Surgery at the University of Massachusetts Medical School, and the James Graham Brown Cancer Center at the University of Louisville School of Medicine. Balaji Panchapakesan, professor of mechanical engineering at WPI, is the project lead.

High cancer mortality rates are largely attributable to tumors developing undetected until they reach advanced or inoperable stages, and to metastasis (when tumor cells travel through the bloodstream and initiate new tumors in other organs). Scientists have long sought a method that can reliably snare tumor cells as they travel through the bloodstream. Such technology could make it possible to detect cancers at very early stages, when treatment is more likely to be successful, and to spot the genetic changes that tumor cells undergo when a cancer is beginning to metastasize.

“Isolating CTCs with high purity is a significant challenge, akin to finding a needle in a haystack,” Panchapakesan said. “These cells comprise as few as one to 10 cells among a billion blood cells, and the shedding of CTCs from tumors is a highly discontinuous process.”

A number of research labs and companies have created so-called liquid biopsy devices, but the devices currently available have important limitations, Panchapakesan said. These include low sensitivity; the inability to trap CTCs of all sizes and types, or to capture clusters of CTCs along with individual cells; difficulty in retrieving captured cells from the devices for laboratory analysis; and high manufacturing costs. In addition, contamination of captured CTCs by white blood cells, which are similar in size to and can be mistaken for CTCs, is a problem for many liquid biopsy devices. 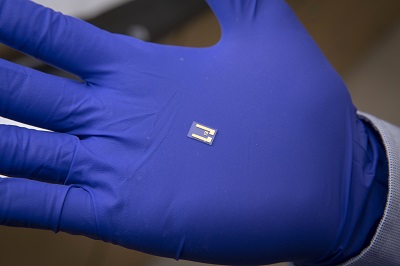 The device developed by Panchapakesan’s team, described in the Lab on a Chip paper, has none of these limitations. The centerpiece of the device is a layer of carbon nanotubes that lines the bottom of a small well formed in a silicon/glass wafer. Panchapakesan says the chip design takes advantage of a natural tendency of CTCs to attach. “In order to travel to a distant site in the body and start a new tumor,” he said, “CTCs need the ability to attach in an environment that is not conducive to attachment. In previous research, we have shown that they will attach preferentially to carbon nanotubes, but that white blood cells will not, by and large.”

In addition, recent studies have shown that CTCs are far more fragile than previously believed and are subject to the environmental and mechanical stresses inherent in the blood stream. “These cells won’t survive unless you give them a rocklike matrix to attach to—a softer matrix requires too much energy from the cell,” Panchapakesan said.

The fact that white blood cells do not adhere to the nanotubes makes it possible to remove them from the chip, leaving the CTCs behind to be counted and identified. Red blood cells, which vastly outnumber the circulating tumor cells, also pose a problem. Since they tend to settle to the bottom of the chip, they could prevent CTCs from adhering to the nanotubes. The research team addressed this problem by lysing, or breaking up, the red blood cells before adding a blood sample to the chip. They found that the lysing process has no effect on the CTCs.

Tests of the chip using blood spiked with a known number of cancer cells tagged with fluorescent dye showed that it has a high sensitivity, with between 89 and 100 percent of cells in the test samples being captured. (The sensitivity of the chip increased the longer the blood remained in contact with the nanotubes.) Tests were also run with blood samples from actual breast cancer patients (stages 1–4) and yielded 100 percent sensitivity for detecting CTCs. CTCs were captured from all seven patient samples, while no tumor cells were captured from the samples from two healthy patients.

What’s more, the chip captured individual CTCs exhibiting multiple phenotypes from early- and late-stage cancer patients, another potential advantage of the device. While other methods used to capture cells in other devices exhibit biases that prevent them from capturing the full range of cancer cell phenotypes, the WPI carbon nanotube chip appears to have the potential to do so.

“These initial clinical studies,” Panchapakesan said, “in which we were able to capture and identify individual CTCs of varying phenotypes, show that this device could become an important tool not only for tracking the progression of cancers and 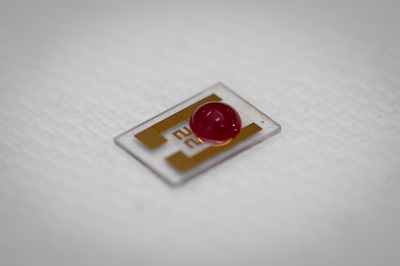 their response to radiation or chemotherapy, but also in making predictions about the likely course of the cancer, which could help physicians identity the most effective course of therapy.”

The tests also showed that the carbon nanotube chip can capture cells regardless of their size and can also capture clusters of CTCs in addition to individual cells. (CTC clusters are rare, but they appear to have a greater ability to seed new tumors than individual CTCs.) Because the cells settle gently onto the nanotubes and latch on with tendrils that extend from the cell body, they are not damaged.

And while captured cells must be removed from other devices for analysis, which can be difficult with devices that use narrow microfluidic channels and often results in damage to the cells, the cells captured by the carbon nanotube chip remain viable and can even be cultured. In addition, because the chips are transparent, it is possible to stain and study captured cells without removing them.

The chip described in the Lab on a Chip paper is the latest generation of a liquid biopsy chip that has been under development for several years in Panchapakesan’s Small Systems Laboratory at WPI in collaboration with the University of Massachusetts Medical School and the University of Louisville.

The chips are made with materials and batch fabrication techniques similar to those used to make semiconductors. The current generation is a 76-element array of test wells on a glass and silicon wafer. In addition to making mass production possible, the multi-well design makes it easy to split a blood sample among multiple wells. The small volume of blood placed in each well makes it possible to more accurately count the attached CTCs.

Panchapakesan said he believes the latest generation of carbon nanotube liquid biopsy chip is ready for clinical trials. Toward that end, he is working with StrandSmart Inc., a Silicon-Valley start-up led by CEO Adrianna Davies. The team envisions testing a point of care (POC) device to detect cancer in the earliest stages globally.

“This potentially life-saving technology could have multiple beneficial applications,” Panchapakesan said. “It could help shed light on the complex biological and genetic processes at play in cancer. It could detect cancers at a very early stage by capturing the cells that nascent tumors shed into the blood. It could identify CTCs with metastatic potential before new tumors even begins, and it could help shape treatments customized to each person’s cancer.”

The highly interdisciplinary team of researchers working on this technology consists of graduate students Masoud Loeian and Farzaneh Farhadi, and postdoctoral researcher Sadegh Mehdi Aghaei at WPI; Dr. Mark Johnson and Dr. Hong Wei Yang at UMass Medical School; and undergraduate student Veeresh Rai, along with Dr. Farrukh Aqil, Dr. Mounika Mandadi, and Dr. Shesh N. Rai at the JG Brown Cancer Center at the University of Louisville. Additionally, the tissue and biobank facility at UMass Medical School provided some of the patient samples for the study.