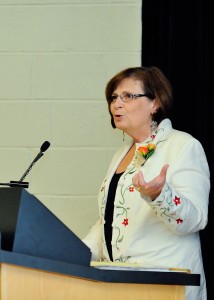 Karen Kashmanian Oates, professor of biochemistry and the Peterson Family Dean of Arts and Sciences, was honored earlier this month as Alumna of the Year for the College of Science at Rochester Institute of Technology, one of several 2015 Distinguished Alumni Award winners. The program honored alumni who have become “leaders in education and industry, innovators in imaging, advocates for social justice and equity, compassionate healers, and skillful communicators.”

Oates, who earned a bachelor’s degree in medical technology in 1971 at RIT, then a master’s in 1973, was acknowledged as a noted scientist, award-winning educator, and respected leader. “As dean, she is  responsible for eight departments and six programs of study spanning the natural and life sciences, social sciences, arts and humanities, mathematics, and computer science, plus several interdisciplinary programs, including bioinformatics, data science, cybersecurity, environmental studies, and a shared robotics engineering program,” the citation notes. She received her PhD in biochemistry from George Washington University.

University faculty give the gift of knowledge selflessly to better not themselves, but the next generation that follows.
Karen Kashmanian Oates

“My parents would be very proud,” Oates said in accepting the award. “My dad spent his life working in a factory. Once, I vividly remember him running onto campus in his work pants and a T-shirt and slippers to take me home after hearing of the shootings at Kent State.

“My mother stayed home to take care of us kids. We were a typical first generation Armenian family with parents who wanted nothing more than to see their children go to college. My brothers, one who is here with me today, and I did not disappoint them.”

Oates joined WPI from the National Science Foundation, where she served as deputy director of the Division of Undergraduate Education, charged with supporting innovative programs to strengthen undergraduate education and help revitalize American entrepreneurship and competitiveness. She began her academic career at George Mason University, where, as associate dean for the new College of Integrated and Interdisciplinary Studies, she helped create George Mason’s New American College environment. 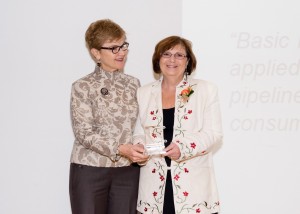 She later served as inaugural provost for the Harrisburg University of Science and Technology, where she established the National Center for Science and Civic Engagement and helped secure NSF funds for Science Education for New Civic Engagement and Responsibilities, which works to improve undergraduate STEM education by connecting learning to critical civic questions. As a teacher, she has focused on women’s health, faculty development, service learning, business-higher education partnerships, and K–12 science and math education.

Oates told the gathering that she was proud of RIT for choosing a scientist, science educator, and higher education administrator for this award, noting that she was sharing the stage with alumni who have started successful companies, invented new devices, or invested in the financial markets.

“I haven’t done any of that!” she quipped. “I invest in the next generation of scientists and engineers and although I’ve held substantial leadership positions in research, in government, and at the university level, I am most proud of my investment in students.

“I believe education is our most important intergenerational compact. University faculty give the gift of knowledge selflessly to better not themselves, but the next generation that follows. I’ve never thought about students as a statistic, but a flesh-and-blood dynamic being with feelings, dreams, and emotions—just like me. I know I speak for all faculty when I say students aren’t tolerated—so we can do our thing—they are our thing. They are not an interruption in our work but are the purpose for our work.”

Among the honors Oates has received are the Bruce Albert Award, presented by American Society for Cell Biology for excellence in science education reform, and the Distinguished Public Service Award, the highest civilian honor presented by the City of Harrisburg, Pennsylvania. In 2012, she was inducted into the prestigious American Association for the Advancement of Science as a Science Education Fellow and was recently named a Sigma Xi Distinguished Lecturer.