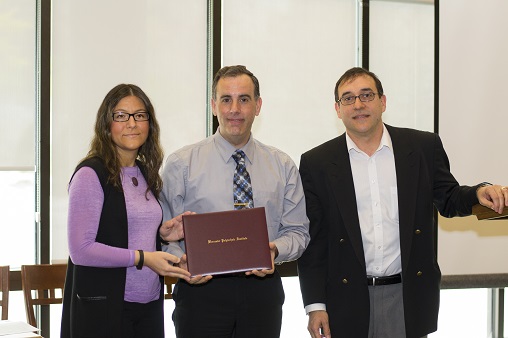 Germano Iannacchione, head of the WPI Department of Physics and WPI Sigma Xi Chapter secretary, began the ceremony by describing Sigma Xi’s humble beginnings. He noted that the international honor society, which recognizes excellence in all fields of science and engineering, was started by a handful of members at Cornell University in 1886.

“The society quickly grew and WPI became a charter member of Sigma Xi in 1908,” said Iannacchione. “The men and women being inducted today join illustrious members like Robert Goddard, whose signature you can still find in our membership book.”

I am honored and humbled to be the 2015 recipient of Sigma Xi’s Senior Faculty Researcher Award at WPI, and to join the distinguished group of former recipients.
Prof. Diana Lados

President Leshin, who was also inducted into the honor society, gave a brief but inspiring keynote address on the value of research and interdisciplinary collaborations.

“What makes Sigma Xi so special is that promotes innovation in research in all disciplines,” said Leshin. “It brings out in each of us the understanding that we are part of a community that extends beyond the walls of departments or programs, or even colleges—it reminds us that we are all part of a larger community of explorers.” 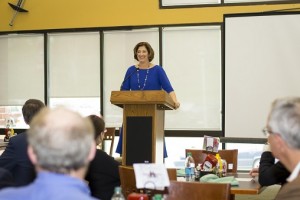 She continued, “Real challenges in the world, whether they are health or poverty or security, really don’t give a darn what department you’re in. They want to know how we can collectively advance understandings to increase the quality of life for people around the world.”

Leshin also described some of her own exciting experiences as a researcher and ended with a call to action to members of Sigma Xi to build upon WPI’s strong record of cross-disciplinary research.

“I would love to challenge Sigma Xi to think about how we can collaborate in even more ways that serve society so much better than when each of us stays in our comfort zones,” she said. “Since there are so few barriers to collaboration at WPI already, we have a chance to be a true exemplar in the world.”

Following Leshin’s speech, award winners in six categories were honored for research accomplishments. Winners were nominated by fellow Sigma Xi members and selected by a committee including Leshin and current Sigma Xi officers. 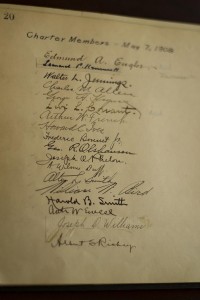 Diana Lados, associate professor of mechanical engineering, won the Outstanding Senior Faculty award, which recognizes a senior faculty member who is considered a leading researcher in his or her field.

Lados, who joined the WPI faculty in 2006, is widely known for her research in materials science. She recently received a $424,000 award from the National Science Foundation (NSF) to develop a new way to manufacture metal-ceramic composites to make vehicles lighter and more energy efficient, and she was recognized last year with career achievement awards from both the SAE International and Minerals, Metals, and Materials Society.

“I am honored and humbled to be the 2015 recipient of Sigma Xi’s Senior Faculty Researcher Award at WPI, and to join the distinguished group of former recipients,” Lados said.

Lados is also no stranger to Sigma Xi, having previously received both the Sigma Xi Outstanding Junior Faculty Researcher Award and the Outstanding Doctoral Dissertation award.

This year the Outstanding Junior Faculty award, which recognizes junior faculty members who have established a significant program of research, was given to Sonia Chernova, assistant professor of computer science.

Chernova has garnered many accolades since joining WPI in 2010, including an NFS CAREER Award for research exploring how people can teach robots to perform simple tasks, and two recent NSF awards aimed at developing new technologies to help protect workers caring for patients with infectious diseases.

“As incoming president of the Sigma Xi Chapter at WPI, I enthusiastically look forward to continuing to play an active role and bring my contributions to this prestigious research society and its great future,” Lados said. “This will involve disseminating knowledge from my research on materials design integration and advanced manufacturing and introducing several exciting new activities that will follow and enhance the 107-year tradition of the society at WPI, while better engaging and serving its more than 600 worldwide members and our WPI research community at large.”

Additional awards were given to the following recipients:

At the event, 22 new student and faculty members were also inducted into the society as newly elected associate and full members.