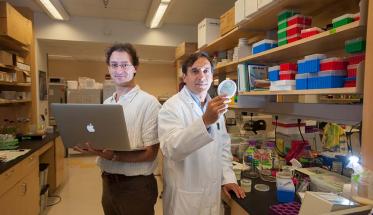 Erkan Tüzel is a physicist who builds models that simulate complex systems. Luis Vidali is a biologist who studies plant physiology at the molecular level. They’ve combined their expertise and their passions into an interdisciplinary partnership that is yielding remarkable fruit.

The project was due the next day, and time had gotten away from them. So as dusk dissolved into night, and the first fakes of a winter storm swirled through the trees, they hunkered down in the office they share in the WPI Life Sciences and Bioengineering Center and wrestled ideas from the whiteboard to the keyboard, driven by caffeine and the immutable deadline.

At work that long winter night in 2010 were not undergraduates struggling through an academic rite of passage, but two new professors at WPI, one a physicist, one a biologist, racing to finish their first joint grant application for what was emerging as a powerful partnership.

By two in the morning it was time for a break. Tüzel and Vidali emerged from the cocoon of their concentration, stretched their legs, and looked out the window to see everything covered in white. “The storm wasn’t supposed to be that bad,” Tüzel remembers. “But it had turned into a blizzard.” Tüzel headed to his nearby apartment; Vidali, unable to drive through the deep snow, bunked down in the office. Tüzel returned at first light with sandwiches and snacks, and they resumed work, submitting the application just before the deadline. “It would be a better story if we got the grant,” Tüzel says with a laugh.

A computational soft-matter physicist, Tüzel builds course grained models that simulate the behavior of complex systems. Vidali is a biologist who uses biochemical and genetic tools to study plant physiology at the molecular level. The pair joined the WPI faculty in the summer of 2009. 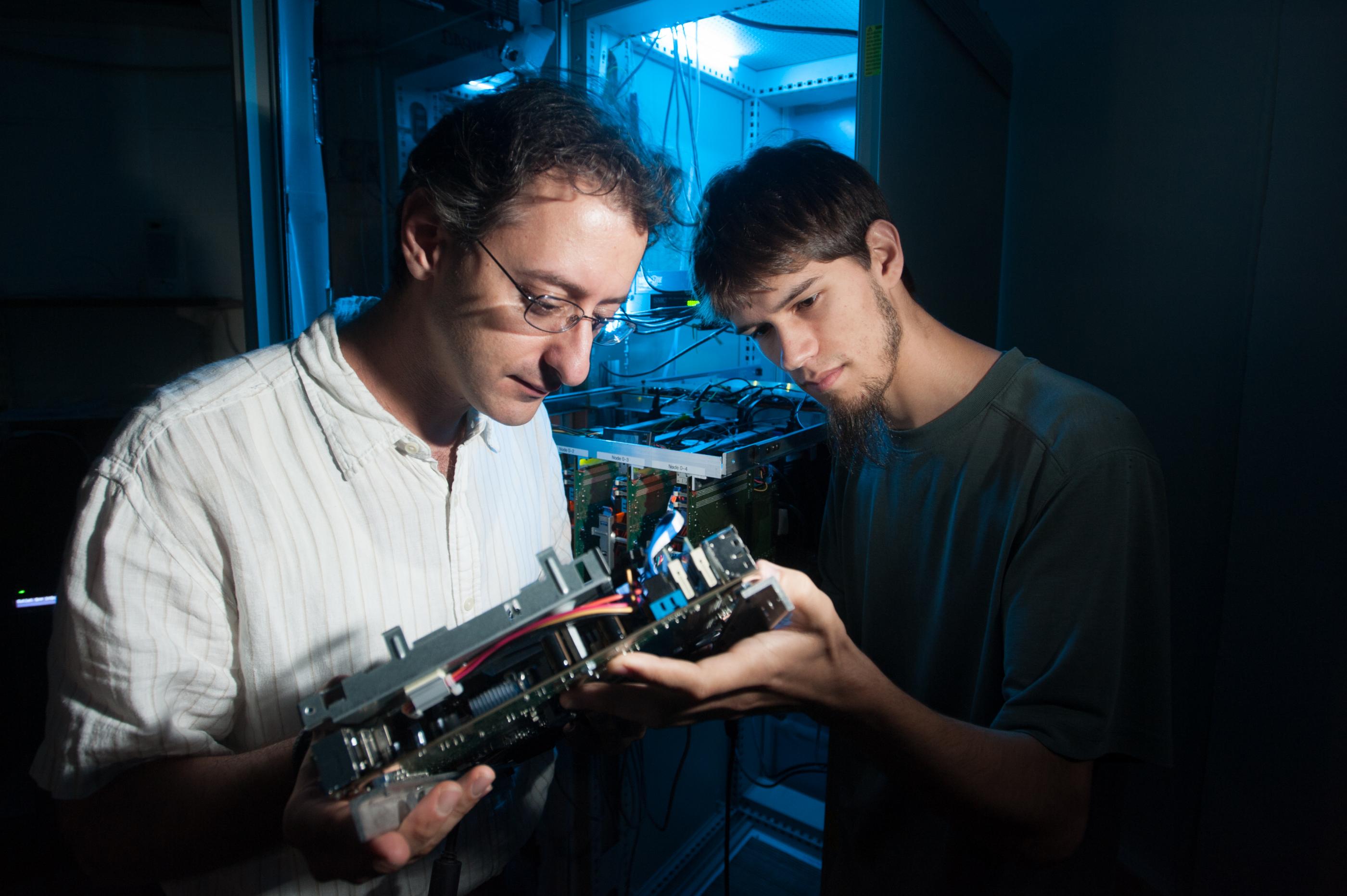 Erkan Tüzel and James Kingsley, PhD candidate in physics,
examine a component of a high-performance computing cluster that
Tüzel and his research team use to run course-grained models to
simulate the behavior of complex biological systems.

A generation earlier, it would have been rare for a physicist and biologist to become academic research partners — the fields were too disparate. But Tüzel and Vidali aren’t constrained by traditional academic boundaries. From his early days as an undergraduate, Vidali enjoyed mathematics and the satisfaction of measuring and quantifying his work. Likewise, Tüzel has always been fascinated by the mysteries of biology, and he focused his postdoctoral work on modeling the dynamics of components of living cells.

This overlapping interest was not lost on WPI. In fact, building a research focus in the emerging field of biophysics was part of the strategy for recruiting the faculty class of 2009. Once Vidali and Tüzel had accepted their offers, Germano Iannacchione, head of the Department of Physics, lost little time in planting a seed.

“I wanted to obtain a grant to fund a microscope that could image cellular processes in real time, and Germano told me he thought Erkan might be interested in it, too,” Vidali says. “So I emailed Erkan and found that he was working for the summer as a teaching assistant in the physiology course at the Marine Biological Laboratory in Woods Hole, which was fantastic, because I had taken that same course a few years before. It gave us a common experience to talk about.”

An exchange of messages led to phone conversations, then meetings over coffee, and even a few beers after work. “Right away, Erkan understood the problems I was facing in my lab, and he could communicate to me in biological language, not just using mathematics,” Vidali says.

Tüzel jumps in to emphasize the same point. “Luis is very quantitative, compared to many biologists I have met in the feld,” he says. “So it was easy for us to talk about things right from the start.”

It turned out both were focused on similar fundamental questions. Tüzel studies microtubules, which are small yet strong filaments that give cells structure (a cytoskeleton) and the molecular motors that transport cargo along these microtubules in support of cellular processes. Much of Vidali’s work is also focused on the cytoskeleton and how the complex overlapping networks of microtubules and filaments made of the protein actin are involved in directing plant growth.

Vidali and his laboratory team conduct experiments with living cells and whole plants. Tüzel’s team uses advanced mathematical modeling and builds high-power computational tools to simulate the dynamics within cells. By joining forces, they bring complementary science and technology to bear on common problems. It is a synergistic partnership that helps each team advance. 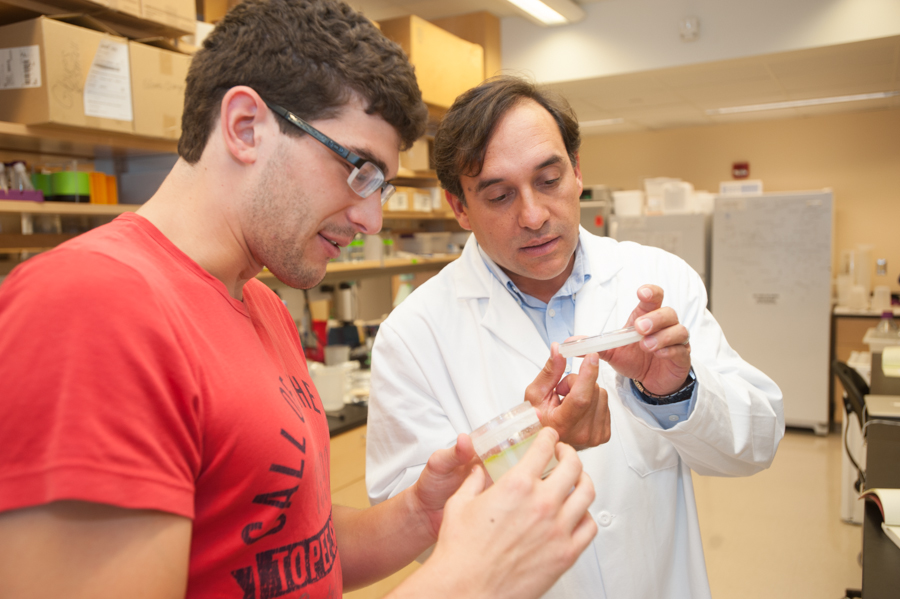 Luis Vidali and Jeffrey Bibeau, a PhD candidate in biology and biotechnology,
study cultures of the moss Physcomitrella patens, a model
system Vidali uses in his research

“One of the big difficulties of being a theorist today is having access to raw data,” Tüzel says. “In many traditional areas of physics, there are a number of important problems to be solved, but thousands of researchers are already working on them. And it’s hard to get access to unpublished data. By working directly with Luis, not only do we explore these exciting and incredibly complex biological systems, but we also get real-time data on novel problems that we use to evaluate and refine our models.”

Dealing with big data has become a major challenge for biologists. Decoding genomes, which produces hundreds of millions of data points, even for simple plants, is only the first level of mathematical complexity. How those genes produce proteins, which then assemble into structures that form and operate the processes of life, all in the dynamic, fluidic, three-dimensional environment of cells, are biomechanical events that can now be measured.

“Biologists today can easily be overwhelmed with the huge data sets we get from our experiments,” Vidali says. “So working with Erkan and his group, who understand the physics of complex mechanical systems and can write programs and build models that help us analyze all this data and make predictions — that gives us a tremendous advantage.”

With data, one can build models that simulate cellular processes in motion over time. Feedback from those simulations then helps refine hypotheses to be tested on living cells in the lab. Through this collaborative cycle, Tüzel and Vidali have jointly discovered and published new knowledge about cytoskeletal dynamics and the molecular mechanics underlying tip growth in plants.

Integrating Tüzel’s expertise in physics and modeling with his groundbreaking work on plant physiology helped Vidali earn a coveted five-year, $977,000 CAREER Award (the largest such award ever received by a WPI faculty member) from the 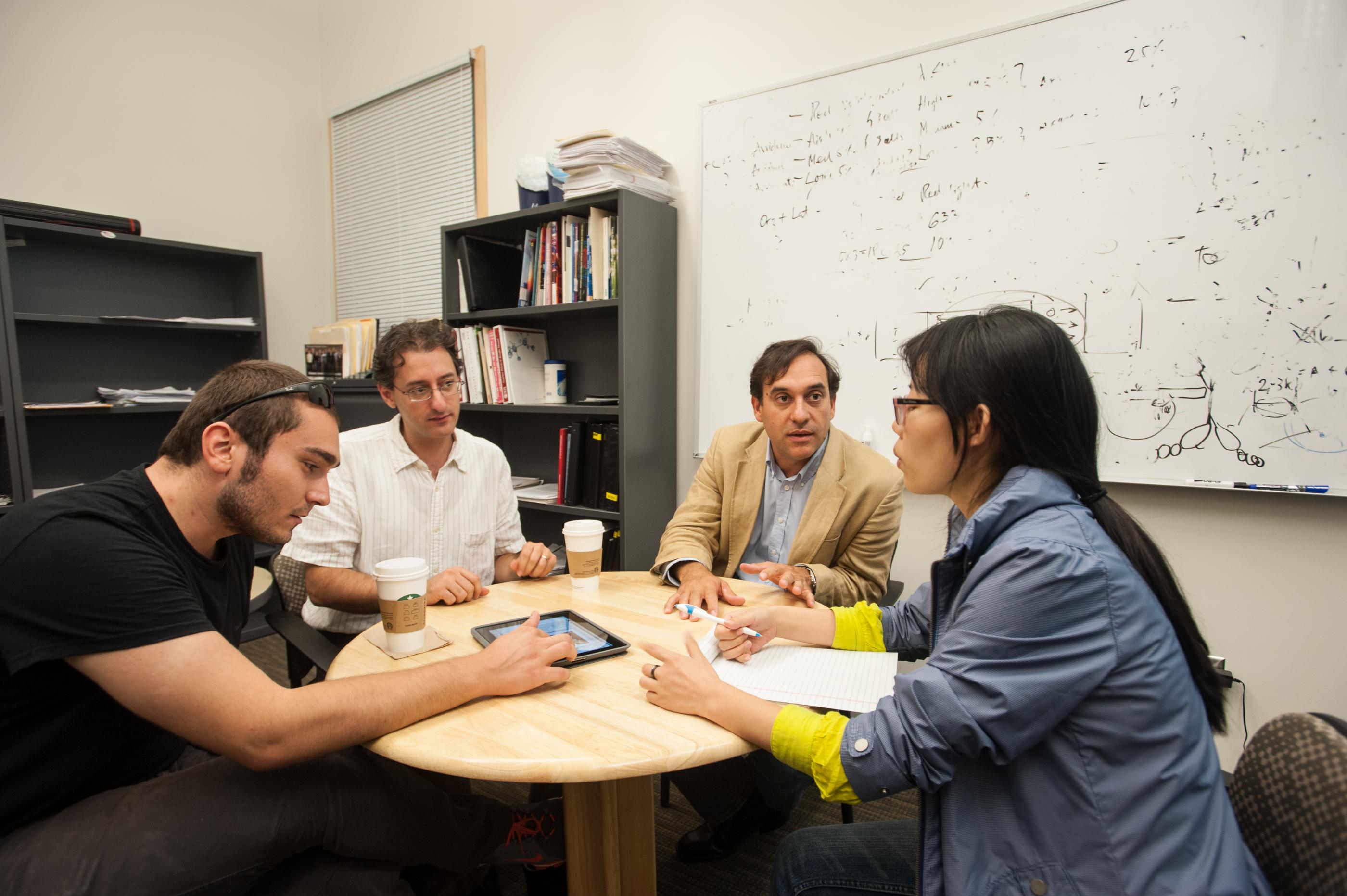 From left, Goker Arpag, a PhD candidate in physics, Tüzel, Vidali,
and Zhiyuan Shen, an MS candidate in biology and biotechnology,
discuss ongoing research collaborations in the office that Tüzel and Vidali
share in WPI’s Life Sciences and Bioengineering Center.

National Science Foundation (NSF). Tüzel and his colleagues at Penn State University secured a four-year, $1.75 million R01 award from the National Institutes of Health to study a microtubule steering mechanism that may play a role in helping neurons repair themselves after trauma (Tüzel is a co-principal investigator). More recently, Tüzel received a $293,000 award from the NSF to develop models that will help refine a microfluidic device that can sort sperm for in vitro fertilization. He will work directly with Xinming Huang, associate professor of electrical and computer engineering at WPI, and collaborate with a research team at Brigham and Women’s Hospital in Boston.

Tüzel and Vidali have recently expanded their collaboration to include studying the dynamics of chloroplasts, organelles in plant cells that transform solar energy and CO2 into sugar through the process of photosynthesis. Chloroplasts move over the course of the day in reaction to the level and direction of ambient light. This movement must involve molecular motors, the cytoskeleton, and a signaling network, but just how it all works is unknown.

“It’s an important problem that not many others are focused on,” Tüzel says, “and it’s well-suited for our combined capabilities.”

Overall, the collaboration thrives for many reasons. Perhaps most important, they get along. They share interests outside of work, like coffee, ethnic foods, reading, and discussing history. They have become genuine friends and their families enjoy each other’s company. They are also committed to changing the culture of education within their respective fields, pushing their students to learn the language of biology and physics, and to work together on common biophysical problems.

Fundamentally, though, they work together because they seek answers to the same existential questions. “Self-organization, that’s the common theme,” both men say, nearly simultaneously, as the discussion draws to a close in their shared office. Then Vidali goes deeper, with Tüzel nodding in agreement. “That’s life, really. It self-organizes. It has intrinsic properties that create order, and we don’t really know exactly how. So that is what we are trying to understand.”