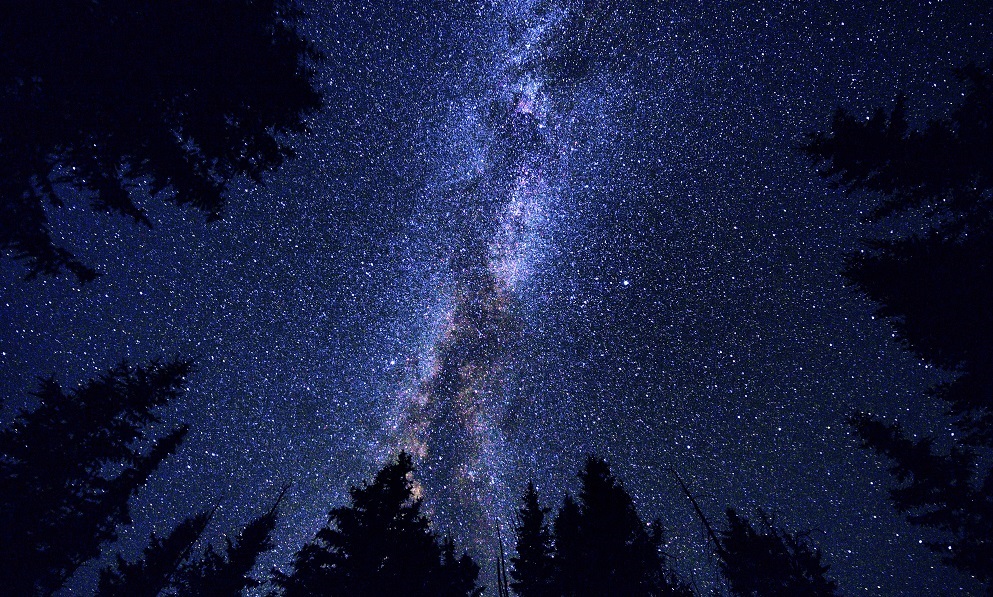 WPI’s project center in Bar Harbor, on Mount Desert Island in Maine, is working to ensure that park visitors will continue to have breathtaking night sky views.

Music professor Frederick Bianchi, who initiated the Bar Harbor Project Center in 2012, leads student teams in yearly IQPs from June to August in the Acadia National Park. Cadillac Mountain, located inside the park, is the highest point along the North Atlantic seaboard and the first place to view the sunrise in the U.S. from Oct. 7 through March 6. It is also considered one of the darkest locations on the east coast.

But, the night sky over Acadia is in jeopardy, Bianchi says, and our Dark Sky project seeks to protect the night skies by measuring the sky quality and analyzing the problems contributing to light pollution in the area. WPI students have been inventorying and collecting Dark Sky data for four years with the goal of protecting the park’s night sky through quantitative and qualitative analysis of the Mount Desert Island lightscape. “There is a lot of activity in the park related to dark skies such as the annual Acadia Night Sky Festival where astronomers and star gazers visit the area to experience the beauty of the skies,” Bianchi says. “It is important for tourism and in the park’s best interest to keep the skies dark.”

Additionally, light pollution affects migration patterns of animals in the park. According to Bianchi, “Light pollution has a long-term, trickle-down effect on wildlife and this issue seemed to be a problem that was beautifully positioned as an Interactive Qualifying Project (IQP). It was literally at the intersection of science, technology, and society.”

For the past four years, WPI has collaborated with the Acadia National Park on the project, Bianchi says. “The Dark-Sky project was mutually beneficial to Acadia and WPI,” he explains. “The National Park Service could never realize this kind of research alone. For example, they were sequestered four years ago like everyone else,” he says, referring to federal budget cuts passed by Congress in 2011. “They don’t have the extra funding so they work in collaboration with outside researchers. The National Park Service strongly supports the work of WPI students because of the effectiveness of the IQP approach.”

For 26-year-old aerospace engineering student Greg Jacobson ‘18, it was his first trip to Bar Harbor. The East Greenwich, R.I., native says the Bar Harbor project center drew his interest before he even enrolled at WPI. As a transfer student researching colleges, when he first looked into WPI’s IQPs and read about the Dark Sky project, he was interested. He was taking classes and tutoring in astronomy at the time, he says. “I’ve always been interested in the night sky and space,” Jacobson says. “But, the only time I could do an IQP was in the summer. There were four IQPs offered in Bar Harbor and it turned out that the Dark Sky project was one of them. It was on my radar before I even started attending.”

As a nontraditional student with more life experience than many of his classmates, he said he was able to strengthen skills he had already honed, such as teamwork and goal setting. “I think an IQP is less about what the project is about and more about learning to work in a team and set goals for yourself and overcome differences you may have among yourselves,” he says. “When you are younger, it is a great way to experience the world and work as a team in a professional setting. You sit down with a group, establish leadership, charge into it, share ideas, and work together.”

​​Bianchi puts together carefully selected interdisciplinary teams that draw from each of the students’ talents and expertise. “The Bar Harbor projects are ideal because while technology is certainly involved, they are not necessarily technological projects,” he says. “A team may not require three computer science students, for example, but it may need one. We put together interdisciplinary teams that emphasize and value diverse creative perspectives with less overlap of technological expertise. One of the most gratifying experiences I have as an advisor is to experiment, like an alchemist, in blending teams in unique ways with potentially extraordinary outcomes.”

The primary focus of the 2016 Dark Sky project with Acadia National Park was to complete and submit an application to the International Dark-Sky Association to receive designation for Acadia as a dark sky park. This required not only suitable sky quality measurements, but the creation of a Lightscape Management Plan and a comprehensive lighting compliance inventory for the park. The detailed inventory compiled data on nearly 1,000 external lights in the park that included data such as lumen output, fixture shielding, bulb color/temperature, and the use of timers and motion sensors.

“Bar Harbor Project Center students are really working for the park and it’s a great feeling,” Bianchi says. “WPI is highly valued and respected in the park from the highest levels down. I let the students know that this is real work, that their contributions will make a difference, and that if they return to the park in 5, 10, or 20 years, they will see firsthand the impact of their efforts.”