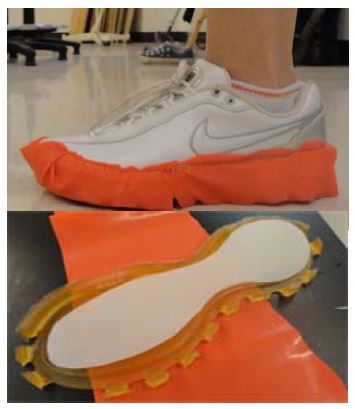 A longtime interest in preventing anterior collateral ligament (ACL) injuries in skiers led a WPI professor to head a team in developing a stress-absorbing shoe that helps athletes in a variety of sports avoid ACL tears.

Mechanical engineering professor Christopher Brown, himself a former All-America skier at the University of Vermont (UVM), began exploring solutions for preventing ACL injuries around 1980. According to Brown, that was just about that time that ACL damage was recognized as the most common type of serious injury in alpine skiing.

“As a grad student at UVM I was on the team that first predicted that ACLs would increase as the stiffness of ski boots increased,” he recalls. “I initially noticed a new kind of ski injury—isolated ACL tears that were not due to hyperextension—in the racers, who were the first to adopt the stiffer boots.” Brown adds that ACL injuries in skiing alone now cost the U.S. hundreds of millions of dollars each year, and globally the cost is in the billions.

In addition to his own history with ACL injuries, Brown had another motivation: Two of his sons were ski racers who tore their ACLs on the slopes.

Fast forward to 2012, when Brown, leading an MQP team that included WPI students Michael Doyle, Jessica Shelsky, and Nicholas Workman, decided to take on the challenge of designing an athletic shoe that would protect court and field athletes from all-too-common ACL tears.

The key to the shoe’s effectiveness says Brown, is its unique sole, which provides for normal performance when loads are under the injury threshold. But when the wearer makes a potentially harmful move (such as a quick turn, start, or stop), the sole is able to absorb the stress before it can be felt in the ACL and do any damage.

He explains that the sole’s unique makeup was crafted using axiomatic design, a process that treats design as a science rather than an art and adheres to a strict set of axioms, or laws, in order to improve the finished product and shorten the design time

“Most engineering design methods have non-value-adding iterations intentionally integrated into the procedure. This wastes time; in an MQP there is not time to develop something this intricate and novel if you waste time on unnecessary and valueless iterations,” he says. By using axiomatic design, “we were able to select the most promising design alternative at the conceptual stage and focused on that.“

While other supportive devices such as knee braces have existed for some time, they are intended to be used after an injury has occurred. This shoe is the first attempt at preventing ACL tears. Brown explains that prevention, rather than treatment, means athletes stay in the game and off the disabled list. Avoiding injury also saves money on medical care and rehabilitation equipment, he adds.

For that reason, the shoe may have great potential in the athletic world. Todd Keiller, WPI director of technology transfer, says there has been no corporate interest yet, but he is hoping to get introductions to some shoe companies. “I think there can be excellent opportunities if we find the right partner—especially considering the fact that torn ACLs are an epidemic among young women,” he says.

On a related note, WPI will host the 7th International Conference on Axiomatic Design June 26-28, 2013. Brown is co-chair of the conference. Nam Suh, a pioneer in axiomatic design and recipient of an honorary doctorate from WPI, will deliver the keynote address June 26 at 6 pm in Olin Hall). Learn more.