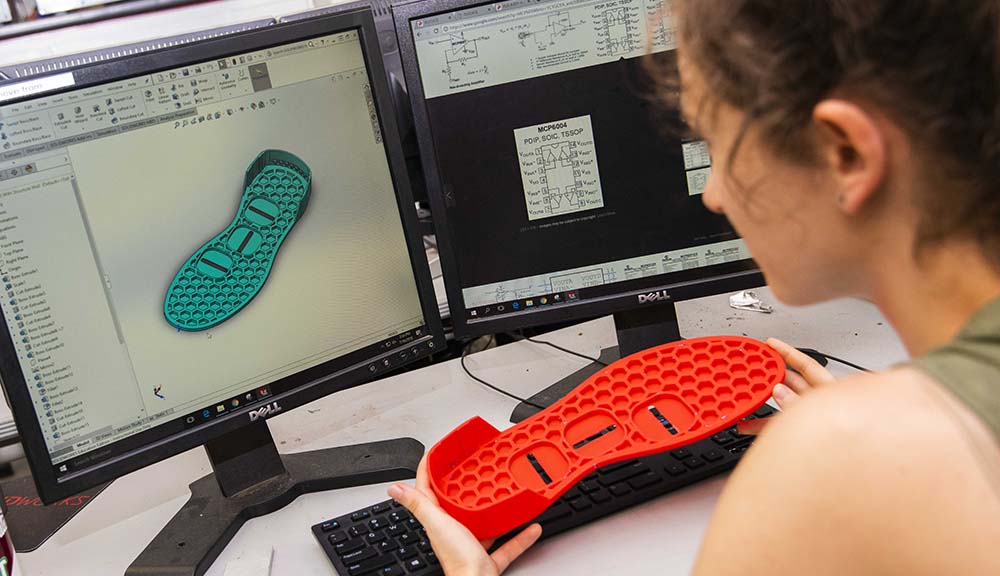 Preventing Injuries Is Their Sole Objective

Under the direction of mechanical engineering professor Chris Brown, a dozen undergraduate and graduate students are developing a new, safer sports shoe with their project, a sports shoe prototype aimed at reducing non-contact knee and ankle injuries.

The project—“Sports Shoes Engineered to Resist Knee and Ankle Injuries,” funded by New York-based Sports Engineering Inc. (SEI)—attracted these students of varied educational and sports backgrounds. A long-term interest in both biomechanics and engineering technologies unites most of the members of the team. Many have studied body movement and injury prevention in the course of their sports participation.

Nate DeSisto ’21 (mechanical engineering) has gone as far as restoring old basketball shoes as a hobby. They are all motivated either by witnessing injuries in sanctioned sports or by having been injured themselves when playing.

Over the years, surgeons have dramatically improved techniques for repairing sports-related injuries in knees—anterior cruciate ligament (ACL)—and ankles. Julia Dunn ’19 (biomedical engineering) stresses that the opportunity to work with Brown on a preventive solution to these issues is a strong incentive for her and the other students who have seen their share of injured colleagues.

Mudge points out that the project exists at the intersection of his majors: BME and ME. He hopes to pursue a career in implant design, which would require a solid understanding of mechanical design as well as the mechanics of the human body, he says.

“When we move forward with each design, we have to contemplate how our components will affect the body beyond the foot and ankle,” he says. “Understanding gait analysis and joint forces will allow us to mitigate knee injuries without instigating other trauma.

As a lifelong athlete in sports who has suffered high rates of lower body injuries, Dunn has always been enthusiastic about developing injury prevention technology. “So, I was excited when I heard about a project that could impact my own life while allowing me to further my engineering skills,” she says.

“Prevention is invaluable to these athletes, and wasted money and time can ruin the career of a high schooler and a professional, so repairing the damage is a solution that comes too late,” adds Muller. “I hope that this project will influence the way the sneaker industry deals with injury prevention technology in their products.”

“Prevention is invaluable to these athletes, and wasted money and time can ruin the career of a high schooler and a professional ... I hope that this project will influence the way the sneaker industry deals with injury prevention technology in their products.” -Jimmy Muller

The project started as an MQP (Major Qualifying Project) at WPI several years ago in which students investigated skiing injuries through force transmission to the soles of ski boots and bindings. Stiffer boot designs of the 1960s had protected the bones of the lower leg and increased performance. But it had also resulted in a marked increase in knee injuries. The WPI research led to the idea for tuned springs in a slide-able interface within the shoes. This resulted in patents being issued for impact-absorbing footwear, specialty ski bindings, and force absorbing appliances used in skate boots.

Working with the university’s Intellectual Property and Innovation office and identifying investors, the effort morphed into a product development project designed to produce working prototypes of shoes that will help to prevent knee and ankle injuries in several sports. This change makes the project unique in WPI history, in that a physical product will actually be produced in addition to research with a report. According to Brown, the plan is to “get them onto somebody's feet one day soon.” The ultimate goal is to make shoes that provide resistance to both repetitive and catastrophic injuries.

Brown also has a personal stake in this research. In the early ’80s he worked on skiing-related ACL injuries when he was still a graduate student at the University of Vermont, where he was an All-American ski racer and coached for two undefeated seasons. For years he has taught a course called “Technology of Alpine Skiing,” which was originally developed while teaching at Dartmouth on sabbatical in the ’90s—one of the subtopics includes equipment and injuries.

Another personal connection concerned Brown's sons, both of whom tore their ACLs skiing—one was ski team captain at St. Lawrence, the other an NCAA champion for Dartmouth who also competed in the World Cup.

After a chance meeting on an airplane with consultant and former Nike engineer Dan Richard, Brown convinced him to visit the WPI campus during the summer and give a talk to the team. By all accounts, he was helpful in his discussion of the process of developing and producing a highly engineered product. Tristan Carlton ’19 (mechanical engineering) recalls that Richard stressed the important aspects of shoe design, production, and safety. Industry trends and the reasons some of them evolved were also discussed.

“Being able to talk with an expert in the field was very beneficial to our team,” Carlton says. “We were able to understand from a firsthand account of how many different types of shoes were made, the trends in the industry, and why certain features exist in current shoes.”

Dunn says Richard gave the group some points to consider regarding important factors of shoe design and comfort that they should maintain within their own designs.

“Dan Richard’s engineering mindset helped translate our ideas from an engineering perspective to the perspective of a sneaker manufacturer,” says Muller, a graduate student. “He also showed us some shoe features that will help with the continuity of our design from shoe sole to shoe top.”

Brown says that ultimately the goal is to prevent injuries—estimated to cost $10 billion per year. While the monetary cost is staggering, the real cost of the injuries also includes the lost potential in the lives of young athletes. It should include both the loss of the abilities to participate in recreational activities, and in the enjoyment from careers that may never be able to blossom due to lost time in training and recovery, he says.

The shoe could also prove valuable to people who engage in non-sports professions and activities who could be at risk of knee and ankle injuries, including military and law enforcement work, construction work, and hiking.

The WPI team is building, testing, and evaluating preliminary prototypes of the shoe in October and November. They hope to produce about 10 pairs in campus labs by January for further testing on the court. A larger trial production run is expected early in 2019.

“This project has taught me a lot about the engineering process, and made me aware that a lot goes on behind any injury-prevention technology,” says Bowen. “I hope to be able to create something that will actually help protect someone’s ACL and will be widely used by skiers.”