Fall by the Sword

To many, the absurdity of day-to-day life is quite easily brushed aside for more terrestrial concerns. Following a long line of existentialist authors who cannot so easily ignore the punch line, John Zeugner has published a series of fictional tales showcasing protagonists who are ill adept at navigating the delicate overlap of meaning and momentum.

“Perhaps we would not much like to be any of the people in my work,” Zeugner says, “but essentially I see them all as normal human beings caught up in the grotesque comedy of living each day in this very random universe—unsuccessfully stumbling toward some sense of meaning or purpose, putting one foot in front of another, one swallow, digestion, and excretion after another.”

This mad dance, somewhere between vision quest and cosmic freefall, is on display in the three short novels that make up his most recent outing, Food for Jackals.

The protagonists within can be seen embodying experiences of the author: the teacher/tennis professional, the American transplant in Japan, the art restoration advisor in Venice. Zeugner arrived at WPI in 1971, teaching a wide range of courses in and around the subject of history. As the Histories and Foreign Languages department evolved into the new Humanities and Arts department, Zeugner’s realm eventually settled into U.S. history with a focus on foreign policy.

“I suppose the emphasis on foreign policy naturally stimulated an interest in other nations, and in the second half of my career at WPI I became far more interested in overseas project work. I became the first advisor at the new London Project Center, and helped establish project centers in Bangkok and Hong Kong.”

These pursuits led to a long period of Japan-based project work, which saw him as both educator and critic of the Japanese university system.

“Project work fuses theory and practice, renders them inseparable,” Zeugner says, citing WPI’s guiding principle. “Overseas project work, like any extended overseas experience, tends to dent your consciousness of your own values and assumptions in a way that probably liberates imagination and provides startling perceptions—all grist for fiction-making.”

To that end, the subject of teaching in Japan became the focus of his short story collection, Under Hiroshima.

Beyond the topics on display in his work, this career stage also allowed Zeugner the time to pursue his proclivity for hatching fictional tales concerning the very real theme of human morality. 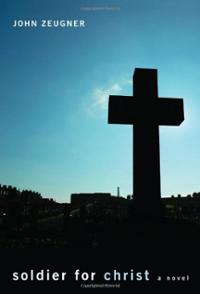 “It was during my first tour in Japan at Osaka and Kobe universities that the data on ghastly medical experiments practiced at Japan’s Unit 731 in Manchuria during WWII began to leak into the popular press, as did news of America’s protective exploitation of the Japanese doctors involved in the postwar period. Eventually those issues became the center of my novel, Soldier for Christ (Wipf and Stock, 2013).”

Despite the temptation to focus on the flawed moral compasses of Zeugner’s “heroes,” the author hopes his audience will see instead a reflection of the broad human condition, not merely the fractured worldviews embraced by his very put-upon lead characters.

“I hope Food for Jackals provides muffled and slightly disturbing laughter, not moral despair. But my understanding and any reader’s understanding may be acres apart. That’s the wonder and delight of writing fiction.”