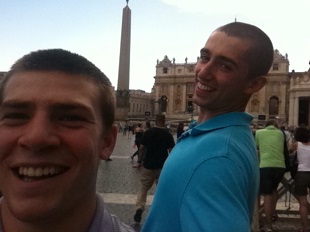 When Matthew Nicholson and Brian Amato heard about the ROTC program known as Cultural Understanding and Language Proficiency (CULP), they thought it sounded like a great summer program.

Little did these WPI sophomores know they would both be selected for the program and even end up on the same Albania-bound team last summer.

The pair spent three weeks in Tirana, Albania’s capital city, last summer teaching military personnel how to speak English, performing community service projects, and getting a chance to experience what both considered a friendly culture and beautiful country.

This was a great experience and made me a better person.
Matthew Nicholson
ROTC Cadet

As part of ROTC, the cadets applied for CULP but could only specify a region where they would like to serve. Both chose Europe, and neither had been to Albania before. They were placed on a 10-member team with cadets from all over the country.

CULP allows Army ROTC cadets to spend up to three weeks in another country learning about the culture, interacting with the people, and seeing how the United States is viewed by others. The cadets develop a cultural awareness gained from this kind of immersion experience and pick up a little bit of the language and cultural understanding of their host country as well

“This was a great experience and made me a better person,” says Nicholson, a mechanical engineering major. “It was very eye opening, and Albania is a beautiful country.” Any cultural differences were overcome by the sheer enthusiasm of the people he came in contact with. “I didn’t think I’d make as many personal connections as I did,” he says. “I expected to learn about their culture, but I didn’t expect the personal connections.”

Three days a week, the team worked with Albanian military personnel to help them become more fluent in English. With most of the Albanians having a basic knowledge of English, ROTC team members enjoyed just holding conversations to help the language flow. “We would have conversations with them for a few hours,” says Nicholson. “We talked about cultural things and things they were interested in, their families.” And being in Albania when the World Cup matches were being played offered an instant conversation starter. 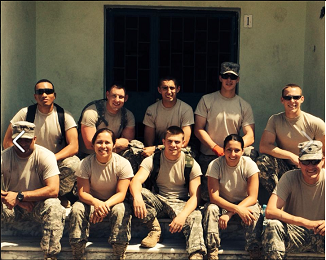 Before arriving in Albania, Nicholson and Amato studied Albania’s history and culture, but it didn’t prepare them for the reality of meeting the people. “That really was the best part of the trip – meeting the local people,” says Amato, a biology major. “There are cultural differences, but once you get to know people, you see we are all the same.”

And although Amato loves to travel, he said this was not a typical trip. “On vacation, you don’t really interact with the local people,” he says. Hearing the local’s stories about Albania and its people made the conversation easy, relaxed, and very enjoyable. “They seem to love their country,” Amato says. “They could talk about it forever.”

Twice a week, the team worked on community service projects that included painting the interior floor of an orphanage. They also spent time making repairs at a schoolhouse and cleaning up its grounds and fence.

Weekends found the team free to explore the capital and take in museums, the many coffeehouses, and even a beach on the Adriatic Sea.

After learning about Albania’s fairly recent history of unrest and the country’s successful confirmation as a candidate for European Union membership last year, Nicholson said seeing the people work hard towards making change was inspiring.

“Especially seeing they were going through hardship, and you can see that and remnants of that in the people,” he says. “It makes you realize we are pretty fortunate. It opens your eyes to how lucky you are.”