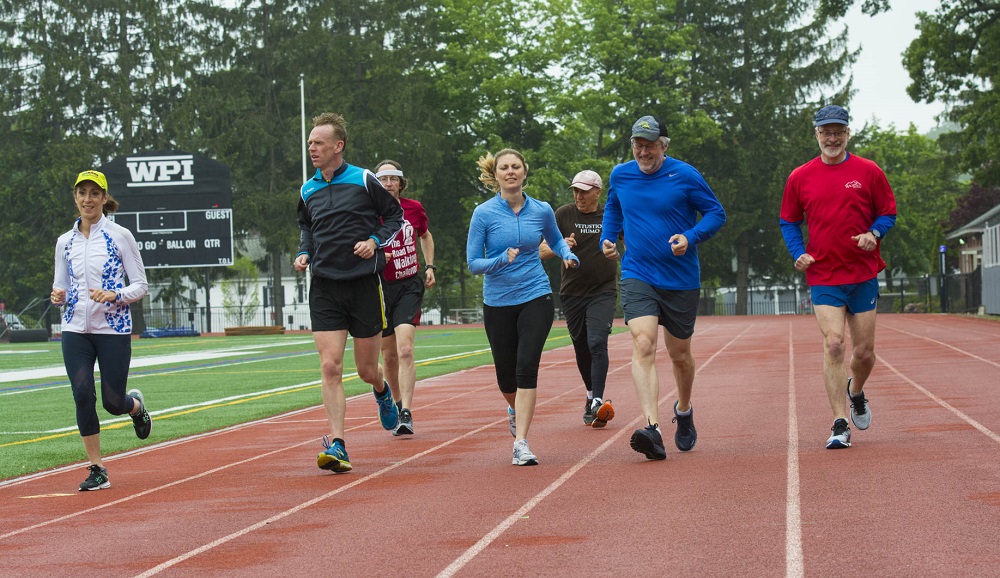 Running Club Founded in the '70s Still Pounding the Pavement

Footpounders group invites runners of all abilities for workouts and camaraderie

They’ve been running on campus for nearly half a century and though the group is informal, it is just as much a part of the fabric and history of WPI as athletics and Gompei the goat.

You may have seen them running—every Wednesday at noon, like clockwork. The Footpounders, founded in the early 1970s by two physics professors, a mathematics professor, and a mechanical engineering professor, is a group of runners at all levels, loosely led by former cross country coach Brian Savilonis (ME).

Back in the 1970s and 1980s, the group would meet every weekday at noon at Alumni Gym and run 5 to 10 miles each day through the West Side of Worcester into Holden near the reservoir, says Al Hoffman (ME, recently retired). He ran in high school and competitively in college, graduated from WPI in 1963, and was elected in 1999 to the WPI Athletic Hall of Fame for cross country. After obtaining his PhD at the University of Colorado, where he was part of the track club, he returned to his alma mater in 1970.

“When I first came back to WPI I was the only person who ran outside in the winter,” he says.

As the group gained momentum, it was given the name Footpounders (by the late physics professor Van Bluemel) as a play on a unit of energy in physics, Hoffman recalls, and the group silk-screened shirts with the name. Later, the original founders would call themselves the “Turtles,” a sub-group of the Footpounders made up of slower runners, he says.

“As time progressed, more people—high-quality runners—joined us,” Hoffman says. “But, Bob, Gordon, and Steve in their own right were pretty good runners, just slower than some of the rest of us.”

Undergraduate and graduate students and others from the greater Worcester community would also run with the Footpounders, which was also a social club for the runners.

“It was part of the fabric of the school, academically and socially,” Hoffman says. “The base of the group was faculty members and we discussed a lot of WPI faculty business on long runs and we all knew each other’s families and knew the good and bad times among the people we were running with.”

Savilonis, referred to as “coach” by the members, was Hoffman’s first graduate student. He soon joined the group and later coached WPI men’s and women’s cross country and track for decades.

“We’re inclusive—anybody interested at all in fitness and running levels who wants to join us is welcome,” Savilonis says. “Some people think that we’re kind of serious and are afraid to join us, but we’re not. You can be at any level. It is a social running group of all levels and we’re looking for new blood.”

Savilonis began teaching at WPI in 1981. Like Hoffman, he ran in high school and college. He also runs marathons and competes in race walking events, having taken third and fourth place at the National Senior Games held in Birmingham, Ala. in June. Still competing in races locally, the Pounders (as they're sometimes called) often place in the top three, he says, pointing out that Paul Reilly, director of academic advising, won the Harvard 5-mile Road Race a few weeks ago.

“There was a Footpounders PE class at one point,” Savilonis says. “To fill a requirement, students could latch onto a Footpounder to monitor their running for a term.”

Around the mid-1990s, the Footpounders became an official club, he says, and joined USA Track & Field (the national governing body for track and field, long-distance running, and race walking) and started running races all over New England.

“We didn’t have noon classes or as many meetings back then,” he explains. “In the ancient days, everyone would get together. It was a given—slow or fast people, whatever. But, the campus doesn’t operate that way anymore. I don’t think life runs that way anymore. Everyone is so busy with things. Now, everyone is trying to find a minute, but we keep Wednesday sacrosanct.”

WPI graduate student Alino Te is finding the time. After downing a half jar of peanut butter following a Wednesday Pounders workout, he took a break to talk about why he joined the group.

“Running alone is really boring,” he says. “It's tough to find people that ‘like’ to run or run on a regular schedule. With this group of people, no matter the weather or number of folks going to run, I can almost always guarantee people will be running every Wednesday at noon. Having other people to run with really helps me want to work harder and finish a workout rather than quitting halfway through.”

Te said one of his favorite things about the group is that Savilonis is an “excellent coach.”

“There is no possible way of getting him to say that it’s a bad day to run,” he says. “He is encouraging and really only sees the best in our runs, even if they are bad ones. He definitely knows his stuff. He never wants us doing garbage miles just to get miles. He wants us running good workouts that will really help us improve our times whether we want to or not.”

He said he also likes getting out of the office in the middle of the day and running with “the friendliest” people.

“We have people from all different walks of life running different speeds. It doesn’t matter if you’re a triathlete, runner, or jogger. We learn so much from one another.” -Debra Ofcarcik

“I'd never heard about the Footpounders until the day I asked to run with them,” Te says. “I always saw them on the track at the same time and same day cranking through sets. I knew about Professor Savilonis's running from an old job I had on campus because he would stop by pretty often for his duties. I officially learned that he was the coach when I asked a fellow runner, Deb Ofcarcik, if I could run with her entourage.”

Debra Ofcarcik, senior administrative assistant to the dean of arts and sciences, is a triathlete who hooked up with the Pounders when she came to WPI in 2008. She said she loves to run and needed a coach. Her times have improved since joining, she says.

“I was on a road trip with WPI visiting New York when I first started and asked if anybody knew of a running group. They said, ‘You have to get connected with the Pounders.’ I said, ‘Who and what are the Pounders?’ I reached out to these Pounders and they welcomed me with open arms.”

With just two women in the group, she says she would like to see more women join.

“Don’t be intimidated,” she advises. “We have people from all different walks of life running different speeds. It doesn’t matter if you’re a triathlete, runner, or jogger. We learn so much from one another and Brian pushes us. He’s well prepared and always has a game plan and keeps us going.”