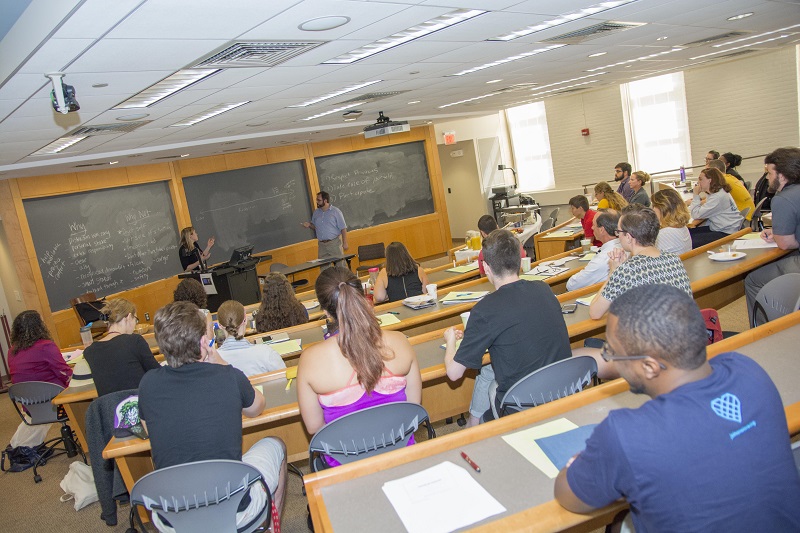 • First-year students entering WPI this year have multiple opportunities to learn how to prevent sexual assault—and support members of the community who have experienced sexual violence or harassment—through several Sexual Assault and Violence Education (SAVE) programs.

Katherine Richey, counselor at the Student Development and Counseling Center, says key elements this year include continuing the Bringing in the Bystander program and encouraging graduate students and teaching assistant to participate in the prevention education. Both moves are aimed at involving the campus community in rape prevention and support.

SAVE programs also create opportunities to promote healthy relationships in general, according to Richey. She says there has been a “strong shift” over the past five years away from fear messages and toward making the community aware of sexual violence issues in a more proactive way.

“We don’t want students to be afraid. We want them to have a vibrant social life and relationships, if that’s what they want. So we’re including more information about consent and how students can have a positive conversation about consent, as well as discussing what healthy relationships look like,” she says. “We want students to know that it’s OK to talk about these issues, and that these are conversations WPI thinks are important.”

SAVE initiatives begin during New Student Orientation, with two mandatory programs for first-years. One is Haven, an online module used at colleges across the country to address issues of sexual assault, relationship violence, stalking, and sexual harassment among students, faculty and staff. This year, WPI asked graduate students and teaching assistants to complete the module to heighten their awareness of these issues among the students they work with and provide guidance and support, Richey says.

WPI also requires freshmen to complete the 90-minute, in-person Bringing in the Bystander program. This year’s presentation will include reading a portion of the victim’s statement in the Stanford University rape case that made headlines—and went viral—this past June. In that case, two men riding bicycles noticed the assault happening and stopped to intervene, questioning the assailant and then tackling him when he tried to flee. The assailant, Brock Turner, was eventually convicted of the rape. The victim expressed her deep gratitude to the strangers in her statement.

Richey says the reading provides the opportunity to discuss how meaningful the cyclists’ actions were to the survivor as well as how others at the fraternity party where the victim and Turner met might have intervened beforehand.

“In potentially dangerous situations, we all have a role to play in prevention,” she says. “Not everyone wants to tackle someone. But what about a distraction technique? It doesn’t have to be a big, dramatic scene.”

The bystander approach also teaches students to watch out for each other and to be aware that sexual violence and abuse issues affect many in the community.

“Everyone is going to experience this issue,” on some level, says Richey.

Richey says that in the four years since the Bringing in the Bystander program began at WPI, the message of community involvement in sexual assault prevention has been well-received. Now, her office is broadening the scope of the SAVE programs to look at other factors that make some people more susceptible to violence. For example, the LGBT community experiences violence at higher rates, and male victims and victims of color are less likely to report violence they experience, she says.

“One of the coolest things we do, that not every school does, is have conversations about gender norms,” says Richey. For example, at the request of campus fraternities, her office developed a six-week course about masculinity, called Ethos. The program includes topics such as what it’s like to talk about relationships, what it’s like to have friends who have been sexually assaulted, and gender roles.

“It’s neat that it came from them. The fraternities said, 'We want this,’” Richey says.

SAVE’s sexual violence education programs have also been evolving to include more discussions on how to support survivors and how much even one instance of sexual violence can affect the entire community.

“We focus on giving the control to the survivor,” says Richey. For example, friends of the survivor may want to call the police, send hostile texts to the alleged perpetrator, or act out in other ways out of anger and solidarity. “We ask them to slow down and think about what makes the survivor feel safe right now,” she says. “We talk about ways to channel that anger, such as coming to a counseling session to talk about those feelings, but to keep that inside when talking to the survivor.”

Another way to support survivors is to avoid victim-blaming, even unintentionally, says Richey. People may know not to say things like, “What were you wearing?” But friends of survivors should also avoid “Why?” questions, like “Why were you out at that time of night?” or “Why didn’t you call someone to walk with you?”

“Survivors are primed to take anything a friend says to heart,” says Richey.

Beyond the support of friends, there are many resources to help survivors of sexual assault and others affected, on and off campus, Richey says, including campus police, the student counseling center, the Worcester police, and other organizations equipped to help with criminal cases. She emphasized that the counseling center, WPI’s health services, and the Collegiate Religious Center chaplain’s office all provide treatment and assistance on a confidential basis.

WPI will also offer accommodations to survivors, from changes in housing and work-study assignments to academic modifications, like arranging for an incomplete. Students may appeal directly to the Dean of Students office, without going through the hearing board, Richey says. That office will also help students obtain a restraining order or order of protection, she says.

SAVE can also refer to students to off-campus sexual and domestic violence assistance programs in Worcester, if they prefer, such as Pathways for Change and YWCA Daybreak. RAINN, a national organization with a 24-hour hotline, can connect students with resources near their hometowns as well as when they are abroad, Richey says.