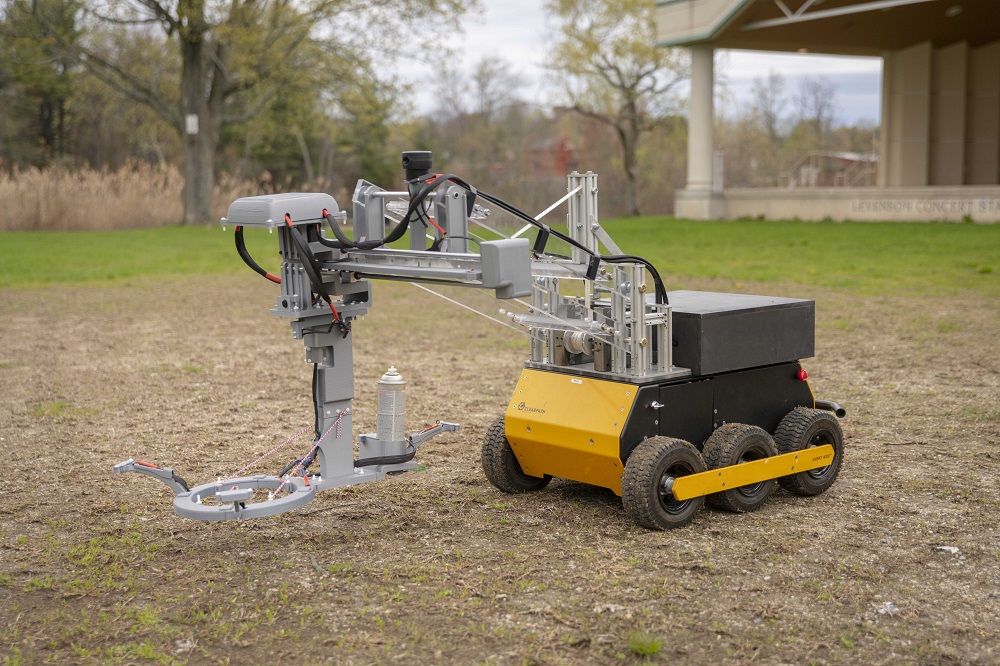 Student teams are developing an autonomous rover and payload-deploying drone to find and safely destroy hidden munitions that kill or maim as many as 20,000 people around the world each year.

Students at Worcester Polytechnic Institute (WPI) are developing an autonomous rover and payload-deploying drone that work together to search for and detonate landmines, a multi-year effort to provide a safer and more cost-effective way to remove a deadly threat to people around the world.

Each year, landmines planted during wartime across fields and backyards and around critical water sources kill or maim an estimated 15,000 to 20,000 people worldwide—one in five of them children—according to UNICEF. Local citizens, unable to afford massive mine detonating machines, use ineffective and dangerous methods to detect the landmines, from slowly poking the ground around them with long sticks to training large, leashed rats to sniff out explosives.

“Landmines are a huge issue worldwide,” said Craig Putnam, senior instructor of computer science at WPI. “They are laid during wars, but long after those conflicts end, the mines continue to kill and injure people. Mines can stay active, and deadly, for up to five decades, so finding and clearing them is critical.”

Under Putnam’s guidance, a series of student teams working over the past three years have developed the dual-function robotics system: the autonomous rover to detect and and mark the mines and the drone that can drop payloads onto the mines to safely detonate them. A new MQP team has taken up the project again this fall.

Anti-personnel landmines, which are designed to be set off by the weight of a simple footstep, cause traumatic injuries, often destroying one or more limbs and causing burns, blindness, or other lifelong injuries, according to the International Campaign to Ban Landmines.

The militaries of large governments, such as those of the United States, have large, reinforced tanks or bulldozers with large drums and chains that can destroy landmines, but they generally are too expensive for smaller communities to purchase. Researchers around the world are working on new methods of detection, but the challenge is making the technology work outside the lab while also making it affordable for small communities.

This robotics system being developed at WPI, according to Putnam, could be an effective but more affordable option for land owners, towns, and villages.

A Robotic Solution to Safely Finding and Destroying Land Mines

The heavy lift DJI drone was the first of the two robots to be developed and is expected to be further refined this academic year. Three years ago, students first tested various mechanisms for carrying and releasing small sand bags, the explosive-detonating payload, and conducted experiments to determine the optimal height from which to drop the sandbags. They also had to determine the optimal speed to ensure that the drone can fly away fast enough to avoid damage from shrapnel. Using simulated landmines with sensors and microprocessors, they also measured the forces exerted by the sandbags to determine the lightest effective payload weight.

The next two student teams worked on the rover: a Clearpath Husky A100 rover body with an inexpensive metal detector anchored to a bar that is, in turn, attached to a moveable arm in front of the rover. As the rover slowly moves forward, the metal detector, which can sense as little as a gram of metal two to three inches below the ground, slides back and forth across the extended bar. If metal is detected, the rover’s arm swivels, bringing a spray can into position. The rover then paints a square around the suspected mine and sends its GPS coordinates to the drone. When the rover has finished searching the entire area, the drone, using the coordinates and a camera to spot the painted squares, flies in and drops its payloads.

Students developed a system using Google Maps that lets the user set up a search area and communicate its GPS coordinates to the rover. They also developed navigation algorithms that the rover uses to autonomously establish a plan to search the area by breaking it up into small grids and then autonomously navigating to each one.

The student researchers also replaced metal parts that were disrupting the rover’s metal detection coil with 3D-printed plastic replacement parts. Putnam said next year’s team will refine both the drone and the rover and, hopefully, create a fully operational system by the end of the academic year.

The multi-year project is being carried out as a Major Qualifying Project (MQP), a graduation requirement for every WPI student. MQPs are team-based design or research projects in a student’s field of study that provide professional-level experience working on real problems and technologies. Some MQPs span more than one year and are developed by a series of student teams, under the guidance of a faculty advisor.

“I’d wanted to do something that has a big global impact,” said Nicholas Lanotte ’19, a team member who majored in robotics engineering and electrical and computer engineering. “It’s a great feeling to have an impact on peoples’ lives directly … I learned a lot more than electrical engineering.” Lanotte now is a graduate student at WPI.