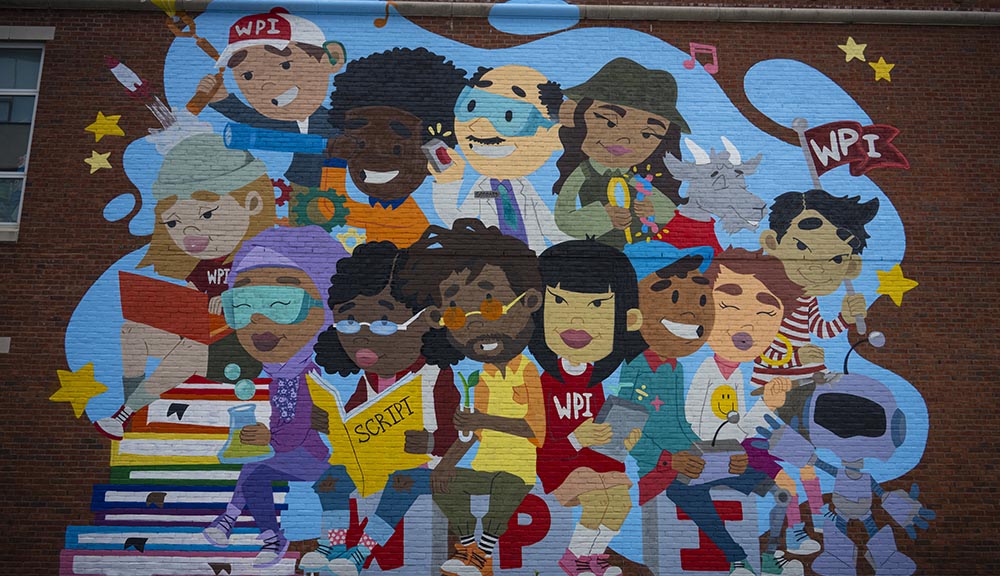 The Class of 2021 funds a mural celebrating diversity in STEM through its Senior Class Gift.

Members of the Class of 2021 certainly had an unusual experience, completing their final year amid collective challenge and uncertainty: a once-in-a-century pandemic, as well as nationwide protests and renewed urgency in the racial justice movement. But this did not deter them in the slightest from their commitment to give back to their home on The Hill. Instead, they doubled down.

“Because it was such a challenging and different year, coming together as a class and showing support makes our community even stronger,” says Joe Howell ’21, who co-chaired the 2021 Senior Class Gift Committee with Julia Vanderstreet ‘21.

The class saw opportunity in the renewed national attention around diversity, equity, and inclusion (DEI). Through its class gift, it could take a stand.

“The pandemic, among other current events, has done a lot to reveal prejudice and oppression in our society,” says Anir Mukherjee ’21, a member of the gift committee. “It’s time we as a school advocate against this discrimination. Why not start with our senior class gift?”

This sentiment struck a chord. The Senior Class Gift Committee grew to 40 members, two to four times the size of committees in previous years. After consulting with Rame Hanna, WPI’s Director of Diversity and Inclusive Excellence, on the many ways their gift could make an impact, they ultimately selected their proposal to fund a mural representing and celebrating diversity in STEM, prominently displayed in a highly trafficked area of campus. “The core of this senior gift is about DEI access and representation. It is about authentically creating greater visibility of diverse identities in STEM and disrupting social constructions of ‘who’ is viewed as an engineer,” says Rame.

For Isabelle Sillo ’21, a member of the committee, the gift is personal. “As a woman of color at a predominantly white institution, I have struggled to find diverse representation among my peers and role models at WPI,” she says. “I believe so strongly in our class project. The mural is a permanent reminder that students in minority groups are seen, heard, and celebrated on campus.”

That’s a message that the Class of 2021, and many others in the WPI community, were eager to get behind. Over the course of the past academic year, over 400 supported the project. The large majority were students in the class, while alumni, parents, faculty, staff, and, notably, students in younger classes, including several first-years, boosted their efforts.

“It is a start to changing people's perspectives on what a STEM or tech school does or should look like,” says Lauren Eppinger ’24, who supported the project. “Traditionally, STEM education has been primarily for white men, but that's not true anymore—especially not at WPI.”

This effort has been a complement to other DEI fundraising initiatives at WPI such as the Women’s Impact Network and the Dr. Debora Jackson Endowment for BIPOC Students. The committee also sees the mural as a launchpad for further dialogue and action around DEI on campus. Colleen O’Malley ’21, also a member of the committee, shares, “Our gift will hopefully spark conversations, influence policy on campus, and encourage more scholarships and work to be done for an improved future for our school and community. It sets the precedent for future diversity initiatives at WPI.”

Rame agrees. “As we infuse DEI into WPI’s next strategic plan, this mural will serve as our commitment to authentically blending DEI into the full fabric of the institution,” they say. “The mural is about saying to all of our community members, especially those with marginalized and underrepresented identities, that you not only belong at WPI, but you are invited to partner, co-create, and help transform this community of higher learning.”

Sharinna Travieso, the Worcester native artist selected by the committee to design and install the mural, completed the project this week. The mural is located on the brick wall of the Rubin Campus Center that faces the Innovation Studio, making it one of the first outdoor murals on a university campus in the city.

Of her design, Sharinna says, “I drew my inspiration from the diversity of my city and my own love for science, biology, and art. I hope the students and community feel pride and a sense of belonging when they see this work.”

The mural was unveiled and dedicated Saturday, September 18, during Homecoming weekend. Watch a time-lapse video of its creation below.