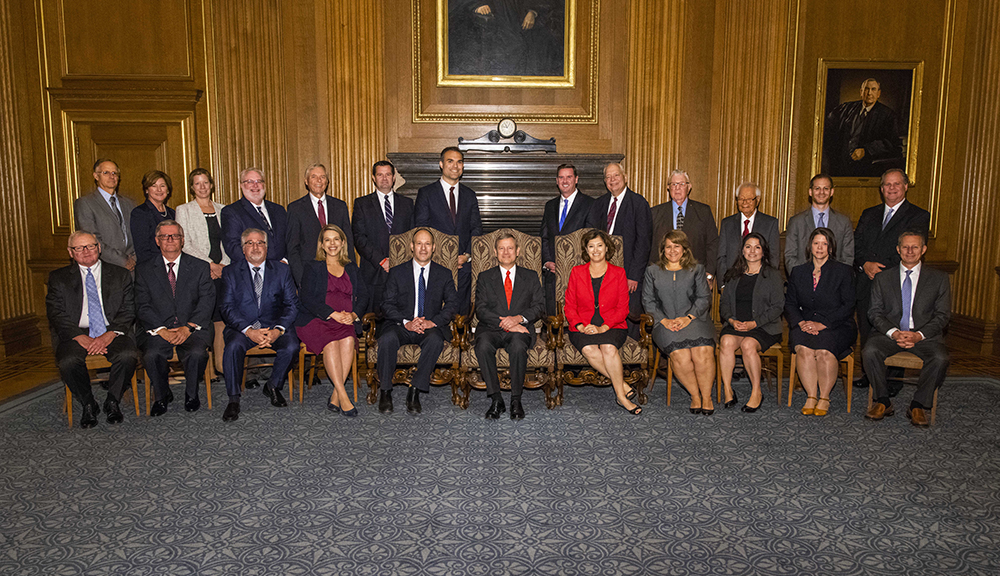 WPI alumni sworn in as members of the Supreme Court Bar, meet justices Roberts and Ginsburg

Seventeen alumni were sworn in as members of the Supreme Court Bar last week, in a university-organized event capped by personal visits from Chief Justice John Roberts and Justice Ruth Bader Ginsburg.

At 10:25 on Monday morning, June 18, after hearing the court announce and discuss decisions in five cases, WPI Senior Vice President and General Counsel David Bunis voiced a motion to admit the 17 alumni—naming each individually—as members of the bar. As Clerk of the Supreme Court Scott Harris read the oath, the 13 men and four women stood just a few feet from the bench and raised their right hands.

Also admitted during the ceremony were Jeffrey Snider and Matthew Thaler of the WPI general counsel office, and Deborah Phillips, wife of one of the alumni. Chief Justice Roberts then declared them admitted, banging his gavel to conclude the proceeding.

“Membership in the Supreme Court bar is one of the highest honors available to an attorney practicing law in the United States,” Bunis later said. “For me, it was an honor to stand before the nine justices on behalf of the WPI lawyer alums who accompanied President Leshin and me to Washington, D.C.”

Admission to the bar is necessary for attorneys who argue cases before the highest court in the land. It also provides bar members who want to see cases argued with their own section in the courtroom. Although the bar section is first-come, first-seated, the line is generally much shorter than seating for the general public, which is extremely limited. Membership also provides the privilege of access to the Supreme Court Law Library.

The applicants' paths from WPI to the legal profession varied. Some had their sights set on law school even before finishing their undergraduate work at WPI, while others saw law as a way of maximizing their impact once in their chosen fields. But, almost universally, the newly admitted bar members credited the WPI Plan and project-based education with preparing them for the rigors of law school and a legal career.

“Being an engineer and a lawyer both use analytical thinking and problem solving,” said Lindsay Gage McGuinness ’86. “Project-based work and short quarters prepared me to work on tight timelines. When I was at WPI there were few women, and I learned to communicate very well with people in many disciplines.”

McGuinness, who majored in electrical engineering with a minor in computer engineering, worked at Digital Equipment Corporation as a hardware engineer while spending four years taking night classes at Suffolk University Law School. She then worked at Wolf, Greenfield & Sacks in Boston as a patent specialist, followed by some time as in-house counsel at Nortel Networks in Billerica. And later, with friends, formed a private patent practice in Acton. Most recently she was vice president and chief patent counsel at medical device maker Hologic.

Jon Anderson ’75 majored in chemical engineering and knew he would be headed for law school after his undergraduate years at WPI. He looked for a university that would prepare him well before applying to Yale Law. “I learned about The Plan,” he said. “It was brand new, and I wanted to have a broader education because I knew I was not going be an engineer. It would allow me to be in control of my education.

Kristin (Deming) Wheeler ’93 is senior patent counsel at Acushnet Co., the holding company of the Titleist golf brand. She has been a member of WPI’s Arts & Sciences Advisory Board since 2013.

Wheeler, a mechanical engineering major, recalled that as a freshman she took a constitutional law class with Professor Kent Rissmiller, which she found interesting and piqued her interest in law. She did a manufacturing co-op with Pratt & Whitney and went on to law school at the Franklin Pierce Center for Intellectual Property at the University of New Hampshire. “I knew I was going to do patent law,” she said.

“I thought WPI prepared me well. WPI’s project-based, practical education helped me adapt to law well. The thought processes for engineering and law are similar. Franklin Pierce was similar to WPI in its practical base.”

David Nickless ’74 was a chemical engineering major who went on to a stint in the Army and Suffolk Law before becoming a bankruptcy attorney. He was sworn in with his wife, Deborah Phillips, his partner in founding the bankruptcy and financial restructuring firm, Nickless, Phillips and O’Connor. He said WPI gave him important skills that he has used throughout his law practice.

“Organization and critical thinking,” he said. “Those two elements are absolutely necessary in the practice of law.”

After being sworn in, the group returned to a conference room, where they were soon visited by Chief Justice Roberts, who congratulated them and gave some historical perspective on some of the chief justices whose portraits hung on the conference room walls. Dominating one end of the room was one of William Howard Taft, who served as governor of New York and as U S. President from 1909 to 1913; he was appointed to the Supreme Court in 1921, serving as chief justice until 1930.

Roberts explained that the office of President was secondary to Taft, whose primary ambition was to serve as chief justice. President Leshin pointed out a Worcester connection, telling how Taft, an avid golfer, participated in a major golf tournament at the Worcester Country Club in 1914, and was given the honor of hitting the first drive.

Shortly after Roberts exited, the gathering was visited by Justice Ginsburg, who spent about 20 minutes chatting with Leshin and the alumni. Leshin told her the university had recently celebrated its 150th anniversary, and presented Ginsburg with a “STEM-inist” mug.

“This presentation is in honor of the integration of our world and your pioneering spirit,” Leshin said. “We have been proudly growing the number of women at WPI. We are proud geeks of all genders.

“Some day we hope to see a woman on these walls,” she said, motioning to the gallery of portraits.

The event, a first for WPI, was organized by Bunis, assisted by the Division of University Advancement.

During an evening reception prior to the courtroom ceremony, Leshin welcomed the alumni and their guests, updating them on a few important developments on campus. She cited alumni survey results indicating that off-campus project work has had a positive impact on their professional and personal lives, as well as their perspectives on life. Shortly after arriving at WPI four years ago, Leshin set a goal of having 90 percent of undergrads participating in an off-campus project. And for the Class of 2022, 100 percent will have the opportunity to do at least one off-campus project.

“We’re doing things to position WPI as a leader in higher ed,” she said. “We have 48 years in project-based learning, and we believe it’s the best way.” She went on to point out that through the Institute for Project-Based Learning, WPI is teaching other institutions how to develop a project-based curriculum.

“This week is the 4th annual Summer Institute for Project-Based Learning,” she said. “There are 26 institutions sending teams of four or five faculty and administrators to WPI for a few days to learn from us, and form their own plans to incorporate project-based learning into their curriculum. Over last few years we have worked with 90 universities, which collectively reach almost a million students. That’s a great way to scale up our reputation and visibility.”

While most of WPI’s new Supreme Court bar members said they had no immediate plans to argue a case before the court, their new status was a source of pride.

“It was quite impressive,” Nickless said of the ceremony. I was at Arlington National Cemetery earlier, which was very somber. This was very uplifting. It’s really the pinnacle of the bar. The only thing better than this is to stand before them and argue a case.”

James Atkinson ’69, who retired as senior staff counsel for the Massachusetts Water Resources Authority, said he would consider using his admission privilege to see cases argued before the court. “I feel it’s a great honor,” he said. “I’ve become a member who can be inside the Supreme Court, even if I never argue a case.”

Wheeler recalled hearing a patent case argued before the Supreme Court when she was in law school. “Being sworn in at the Supreme Court is an honor,” she said. “My family is very excited about this. The opportunity to meet Ruth Bader Ginsburg is really cool.”

Anderson said his education at WPI was better than Yale Law, and praised the university for organizing the event.

“I think it’s very nice of WPI to bring us together. I really enjoyed reconnecting,” he said. “It’s a great honor toward the end of my career. I was the last one moved for admission, so for at least a week I’m going to be the newest member of the Supreme Court Bar.”

Those sworn in as members of the Supreme Court Bar include the following: