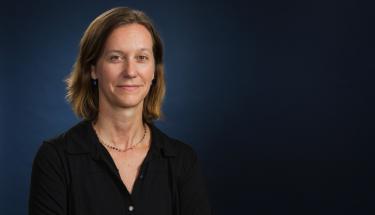 Every year in North America, more than one billion birds die from flying into windows. Through the Livable Cities class taught by biology professor Marja Bakermans and associate professor of humanities and arts Beth Eddy, WPI students joined other college students across the country, beginning in 2014, to collect data to help find a solution to help save the birds.

Data collected by the class in 2014 was used in a bird-window collisions study that took place at over 40 university and college campuses.

Bakermans, who co-authored the study, sought the aid of 40 students taking the Livable Cities class within WPI’s Great Problems Seminar, a program for first-year students. (The study, published in Biological Conservation in July, was led by Stephen Hager of Augustana College and Bradley Cosentino of Hobart and William Smith Colleges.)

Fatal collisions can have a huge impact on migratory bird species, she says.

At the start of the research study, Andrew Vitz, state ornithologist for Massachusetts Fisheries & Wildlife, presented the students with information on dominant threats to birds, nocturnal bird migration, and solutions to reduce bird-window collisions, Bakermans explains. Vitz also participated in a “clean-up survey,” she says, where student teams surveyed the campus grounds of their assigned buildings for bird carcasses prior to the start of official surveys.

“Birds colliding with buildings is a major problem, especially during times of migration,” says Bakermans, who is an avian ecologist. “I study wildlife, especially migratory bird species experiencing a decline, to implement changes that will reduce the mortality risks for migratory species.”

The students went out in teams of five to scour areas surrounding six buildings on campus—two large, two medium, and two small, with different surroundings—in search of birds that met their fate when they collided with a window. Students collected data for 21 days, from Sept. 15 to mid-Oct., 2014.

“One of the highlights in the study is that the emphasis is usually on urban areas, but we can’t forget about rural areas. We have to be careful in those areas as well.” -Marja Bakermans

“Buildings are more of a concern for song birds and birds that migrate at night,” Bakermans says. “Wind turbines are much more of a problem for bats than birds. One of the highlights in the study is that the emphasis is usually on urban areas, but we can’t forget about rural areas. We have to be careful in those areas as well.”

WPI students did not find any birds, she said, but students on other participating campuses found eight carcasses per site on average, with some finding up to 34.

The study found that small buildings are a relatively low risk for birds in rural and urban areas, she said.

“Bird mortality increased the larger the windows,” she explains. “Birds see the reflection of the trees and sky in the window and hit it. With a larger building, there is a higher risk of mortality, with the highest risk in rural areas, probably because birds keyed in on trees and vegetation in those areas to settle down during migration to take a break. In early morning, they see the reflection and hit the windows.”

Though sad that birds are dying that way, she says people are working on solutions, including a “lights out” program instituted by Massachusetts Audubon Society that started in Boston Aug. 15.

“They are getting the message out that lights off in the evening saves energy and money and won’t confuse migratory birds and draw them into areas and disorient them,” she says. “During peak migration in the fall, adults as well as young birds are migrating for the first time and some have no experience during migration.”

Creating bird-friendly buildings is an issue at the forefront of many groups, including the American Bird Conservancy, she says, which are trying to raise awareness.

As a result, some contractors are trying to mitigate the potential for bird collisions, implementing textured glass in buildings or vertical stripes in the glass that are easier for birds to see.

Homeowners can place tape on their windows, she says, use screens to reduce reflections, and move birdfeeders away from windows.

“For students at WPI, this was something completely new to them and it was great to bring to the classroom,” she says.

“Students are more engaged and willing to work if they feel that their work is for some end other than a piece of paper that gets evaluated by an instructor and translates to a grade on their transcript. When the problems are real, and solutions are possible, it is easier to work hard, try something new, and persist through difficulty." -Kris Wobbe

Biochemistry major Kaitlyn Valla ’18  says she and her classmates were assigned buildings to survey. They gathered data and studied the buildings and their surroundings, paying close attention to the number of windows and if they blended in. She was surprised to learn that so many birds are killed in window collisions.

“I never really thought that would affect the bird population,” she says. “I never thought of free-standing buildings as being a threat. I used to think of wind turbines as being a big threat because they are constantly moving.”

Living in a rural part of New Hampshire where there is a large bird population, Valla says participating in the study affected the way she looks at buildings everywhere.

“I learned that no matter what you are doing, you are going to impact something in some way and you should always be thinking about the negative impacts you might be having, even if they are not visible," she says. She realizes that “we are constantly thinking about ways to build to improve our lives, but not thinking about the eco-system that’s surrounding” new buildings.

Great Problems Seminar (GPS) courses are designed to introduce first-year students to WPI’s project-based curriculum, says associate dean of undergraduate studies Kris Wobbe, who heads the program. Each two-term course focuses on one of the world’s “great problems” and is co-taught by two faculty members from different departments, she explains.

In the first term, students and faculty work together to explore the problem from a variety of perspectives and disciplinary angles—including economic, political, technical, and social—and also work to develop important skills in the students such as teamwork, communication, information literacy, research, problem solving, and global awareness. During the second term, the students, in teams, pick part of the problem to tackle and learn as much as they can to propose a viable solution and develop implementation and assessment plans. They write a report and create a poster that is presented at the end of the second term.

“Assessment has shown that participation in the Great Problems Seminar leads to gains in confidence, communication skills, and information literacy,” Wobbe says. “Students feel better prepared in their junior year to tackle their IQPs and some of our students even gain internships or REU (research experience for undergraduates) opportunities in the summer after the first year—a fairly remarkable accomplishment.”

The bird study is an example of what the GPS program is all about, she says—finding a real-world problem and working to help provide a solution.

“Students are more engaged and willing to work if they feel that their work is for some end other than a piece of paper that gets evaluated by an instructor and translates to a grade on their transcript,” Wobbe explains. “When the problems are real, and solutions are possible, it is easier to work hard, try something new, and persist through difficulty—all the things we would want for our students.  And, for first-year students, the projects provide opportunities to identify both strengths and weaknesses while they still have time to select classes that can shore up weaknesses and further develop strengths.”