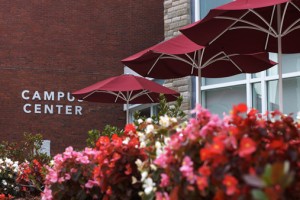 • On Monday, Nov. 11, the WPI community is invited to a dedication ceremony of the newly named Rubin Campus Center.

The dedication is in honor of Stephen Rubin ’74, whose commitment to WPI is as legendary as his humility. Rubin has served WPI in a number of capacities, including as a member of the Board of Trustees since 1996 and  as vice chairman and then chairman of the board from 2010 to 2013.

“When you think about Steve, he is so committed to the entire entity that is WPI,” says Stephanie Eden Pasha, assistant vice president and secretary of the corporation, university advancement. “He cares deeply about the faculty, the staff, and the students in particular.”

But Rubin is not one to seek out attention, she says. Although Rubin and his wife, Tracy, are generous financial supporters of the school, many of their donations are anonymous. His term as chairman saw great strides in the Faculty Governance Partnership, says Pasha, and he has mentored countless students, both officially and informally.

“Actually, I didn’t want my name on a building,” Rubin said in a recent email, “because I like to be modest and just part of the team.” When the board approached him with the idea of naming the Campus Center after him, Rubin says he relented after hearing that it is beneficial to the school community. “So I agreed to have my name on the Campus Center to help WPI,” he says. “I always want to help WPI and make investments in the school because it is doing great – nice students and faculty and administration.”

But the Campus Center seemed fitting for Rubin’s legacy, says Pasha. “Steve is all about connections, openness, and community,” she says. “The Campus Center is a place where the entire community could come together and be together. It represents his ethos.”

Rubin was one of WPI’s first graduates of the WPI Plan when he earned his computer science degree in 1974, and the institution later awarded him its distinguished Ichabod Washburn Award in 1989 which recognizes outstanding professional achievement by a young alumnus. With his teamwork approach, Rubin has been involved in several start-ups and is the founder and past CEO of Intellution, an industrial software company. He currently serves as president and CEO of Recognisys, which helps institutions track and manage donors’ efforts and recognition items.

The center is something Rubin appreciates as a foundation of campus activity. “The Campus Center was built in 2000, and it was an incredible place for the entire WPI community – students, faculty, administration, and guests,” Rubin says. “It makes the community stronger and more connected.”

And Rubin is never one to take himself too seriously, often known for bringing his beloved Nigerian dwarf goats to campus on Founders Day. And decades after graduation, Rubin was tapped for membership in Skull, WPI’s third oldest campus organization.

“We want to honor the work he has done,” says Pasha. “He has done so much across the board and this is a legacy to that.” She also wants future students to see his name and realize they can make a difference, too, with their actions and their dedication to WPI.

Monday’s ceremony begins at 3pm and guests can hear remarks from interim president Phil Ryan ’65, board chairman Warner Fletcher, and Rubin himself before the new plaque is revealed. Then guests can mingle in the open and inviting atmosphere that mirrors the personality of its new namesake.