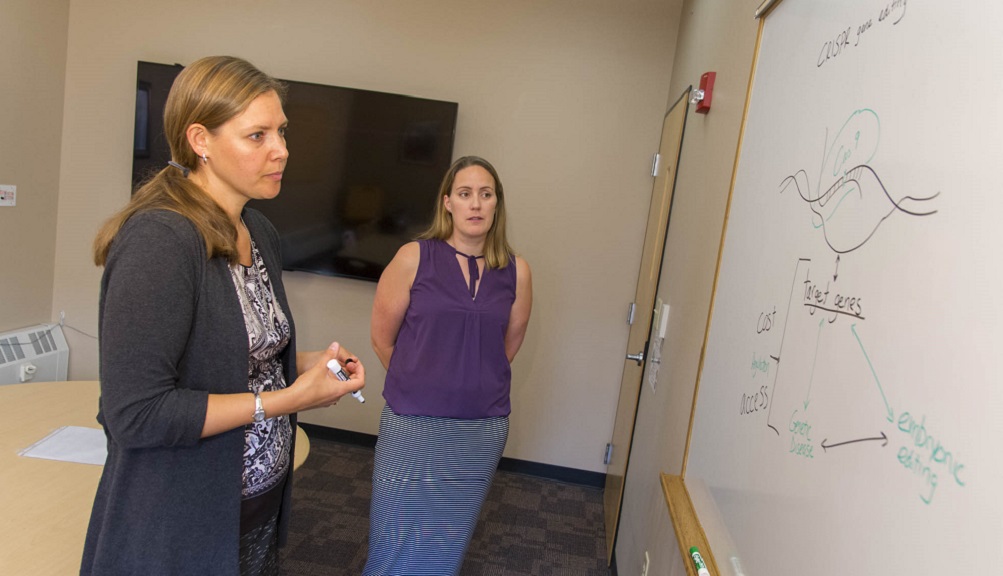 Two WPI professors and their students are looking into the future and asking some tough questions about where science has the potential to take us.

The pair, assistant professor Patricia Stapleton, director of the Society, Technology, and Policy program, and Natalie Farny, assistant teaching professor of biology and biotechnology, are combining their expertise in political science and biology to look at cutting-edge genome editing technology that has the potential to allow humans to tinker with nature.

Clustered Regularly Interspaced Short Palindromic Repeats, known as CRISPR, allows scientists to edit the genes in living organisms, a relatively simple procedure that could be used to edit diseases out of existence. For all the potential good, however, there are serious questions.

“Are we really going to be able to contain it?” Stapleton wonders.

While CRISPR technology has the potential to eliminate many diseases and conditions, it might also someday give scientists tools to be able to edit out gene sequences that make people short, or red-haired, dark-skinned, or slightly built.

But that’s only the start of the questions raised, according to the two professors. Not only are there questions about what can be done, but also how it will be funded, who would benefit, and what would happen to those left out.

“The technology has limitless possibilities, and that’s something we’d like our students to look at,” Farny says.

The professors are now putting together a group of students to start work next month on an evolving research project that will start by looking at existing regulations, then examine the political, ethical, legal, and societal implications of CRISPR technology.

The most recent advances using CRISPR may be of particular interest to the students.

For the first time in the U.S., scientists at a privately funded laboratory in Oregon recently edited the gene in embryos responsible for a hereditary form of heart disease. The embryo was allowed to grow for only a couple days in a laboratory, but it was a significant advance, according to Farny.

“It would mean the disease would no longer be passed on,” she says.

While the professors say no one is questioning that life-altering diseases should not be eliminated if possible, there are serious considerations: Which diseases should be targeted for study? What happens to funding for patients living with diseases that have been spliced out of existence?

Stapleton, who has studied the societal implications of expensive infertility treatments mandated to be covered under insurance in some states but not others, also questions who would have access to the inevitably expensive CRISPR technology.

“There are amazing possibilities, but there is a fine line to walk on how to advance ethically without eliminating the possibility of the potential.” -Patricia Stapleton

As an example, she cites a couple who carry the cystic fibrosis gene and want a child.

Would the CRISPR technology to eradicate the disease from their embryo be available through insurance, or only to those who can afford to pay for the therapy?

And, if only those who can pay for the technology can get it, what happens to the child of the lower-income couple who is born with cystic fibrosis? Would there still be money available for therapies to treat the disease? Who would pay for those treatments?

“It could create a disproportionate disease burden where the lower class would be more susceptible,” she points out.

Farny takes a biologist’s approach to looking at the consequences of the technology.

“There has been a lot of discussion about the safety,” she says.

How precise does the editing have to be, she asks. “How do we eliminate editing errors? Are we OK with 99 percent accurate? Is that a level of risk we’re OK with?”

Another important question the women want to consider: Who gets to use this technology?

But, according to Farny, the technology is actually quite simple, and there is a “do-it-yourself” movement under way, with community labs training laypeople in basic molecular biology techniques.

The professors want to look at what regulations could be put into place to monitor this, and also look at how current and future regulations differentiate between private- and publicly funded laboratories.

“There are amazing possibilities,” Stapleton says. “But there is a fine line to walk on how to advance ethically without eliminating the possibility of the potential.”