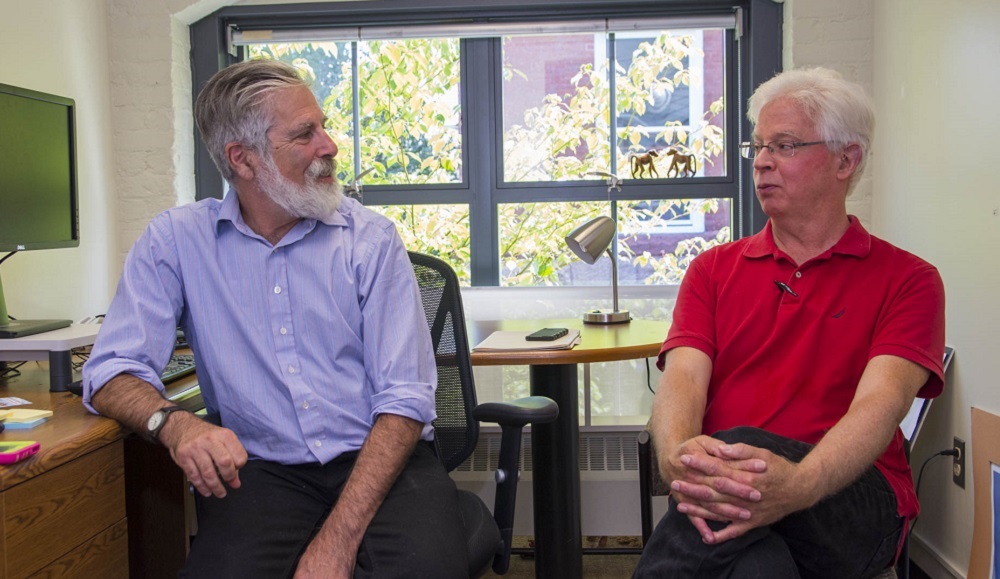 WPI Is Improving Food Security One Project at a Time

With the release of the USDA’s latest report on food security on the horizon, the university highlights how it’s been tackling this issue for the last eight years.

If you are living in poverty and are hungry, it’s your own fault.

According to Professor Mike Elmes, this is one of the greatest myths surrounding people struggling with food security—having enough food to sustain an active, healthy life.

The USDA Economic Research Service is expected to release a food security report today, and Elmes, professor of business, says the report should show the reality of national trends: Food security continues to be a bigger problem across the country than people may realize.

The food security numbers in Massachusetts are, and will probably “continue to be concerning,” says Elmes, who researches food justice, and is involved in a number of food-related projects on campus. According to the U.S. Census, 10.3 percent of the population in Worcester lives at or below the poverty level; since the recession in 2008, the hunger rate in the Commonwealth has increased 40 percent, including more than 700,000 adults and children.

With these statistics in mind, WPI tightened its lens on improving communities’ access to healthy food. For the past eight years WPI has dedicated multiple projects, including Interactive Qualifying Projects—student projects that typically occur during a student’s junior year—and the Great Problems Seminar—interdisciplinary, teamwork-based research conducted on global issues, to address food security issues in Worcester and Boston.

Through these projects, students researched low-income, diverse neighborhoods, and built partnerships with food justice advocacy groups, such as the Regional Environmental Council, the Worcester Community Food Bank, and the Worcester Food Policy Council. They also worked with local researchers from Clark University, UMass Medical School, and the City of Worcester Public Health Department.

For one Worcester-based project during the 2014–15 academic year, students focused on how to design a bioshelter, a special type of greenhouse adapted for food production that relies on renewable energy, such as heat created by compost, to grow food year round. The project was spearheaded by the founder of the Sustainable Food Systems Project Center and instructor of interdisciplinary & global studies, Bob Hersh, along with Elisabeth Stoddard, assistant teaching professor of environmental and sustainability studies, and Derren Rosbach, associate teaching professor of civil and environmental engineering.

Through its partnership with Worcester Common Ground, a community development corporation, and other neighborhood organizations, the IQP team helped transform a 10,000-square-foot abandoned lot in Worcester’s Piedmont neighborhood into a community garden and orchard. Students involved with the project developed a budget to start construction on the bioshelter they designed.

Even though it took two years, Hersh says, Worcester Common Ground raised the funding to build the city’s first bioshelter based on the students’ design. Some students who originally worked on this project a few years ago, even though they graduated, have been part of the construction process.

“This is very much part of the question, ‘How do you devote WPI resources around issues of food access, food growing, and food security by working with the community over the long term?’” Hersh says. How do you “develop strategies for growing food, and how can the city more effectively convey vacant or abandoned lots to community groups to grow food and create the possibility of a city-wide network of community gardens?”

“Students can help illuminate difficult questions that people involved in the food system want to have answered. We’ve helped catalyze discussions. The students have developed reports that are rigorous with data that can be trusted to further discussion about food access and public health.” -Bob Hersh

During the 2015–16 school year, Stoddard and Kristin Wobbe, associate dean of undergraduate studies and associate professor of chemistry and biochemistry, led a team of first-year students in a Great Problems Seminar (GPS) on food sustainability; the goal of the seminar was to research and develop technological, chemical, biological, policy-driven, and other types of solutions to research chronic hunger and malnutrition. The team looked at the growing issue of food insecurity among college students, and how, after paying for tuition and other living expenses, many students have little money left for food.

Through these projects, and others, Hersh says students had an impact on how city groups prioritize their interventions in connection to food and community gardening, and how it addresses questions related to promoting urban agriculture at the city and state level.

“Students can help illuminate difficult questions that people involved in the food system want to have answered,” he says. “We’ve helped catalyze discussions. The students have developed reports that are rigorous with data that can be trusted to further discussion about food access and public health.”

Food for Thought: A sampling of WPI student projects on food security issues