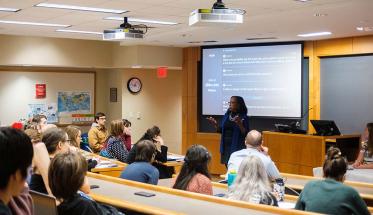 Last month, a Chinese scientist shocked the world—and the scientific community specifically—with the announcement that he had created the world’s first babies genetically edited with CRISPR technology, a tool that allows researchers to easily alter DNA sequences and modify gene function. 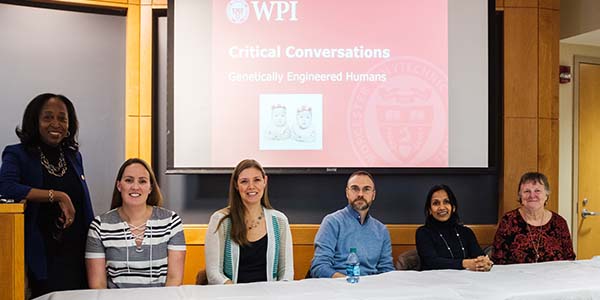 He Jiankui’s experiment to alter the genes in embryos before implantation in the mother’s womb spurred conversations among scientists and ethicists across the globe, reigniting fears of many who believe CRISPR isn’t yet safe or precise enough to be used in human embryos. The work did not go through the peer-review process and thus also sparked concerns about unsupervised, rogue scientists acting outside of accepted practices and norms.

In the wake of this, WPI organized a one-hour, campus-wide forum for students, faculty and staff to examine the scientific, societal and ethical considerations involving genetically altered humans.

The panelists explored some of the concerns regarding genetically altering human embryos, including safety, the ethics of creating designer babies, informed consent, and justice and equality of the new technology, which, due to its high cost may only be accessible to the wealthy if it becomes accepted practice.

When biomedical engineering major Julia Dunn ‘19 heard about the experiment, she was curious and had questions, one of which was displayed on an interactive screen in the Salisbury Laboratory classroom where the forum took place: How was He’s experiment “done under the radar?” It set a precedent, Dunn said, and potentially changed future experiments.

Farny responded that there is a moratorium on U.S. federal funding that regulates access in this research area, and that there are restrictions on how long scientists who genetically modify embryos can let them grow after experimentation.

Heilman said when he heard about He's experiment, he was driving to WPI to teach a writing workshop and almost had to pull over. He scratched the workshop and instead talked with students about CRISPR technology that day. “It was fodder to talk about something very current and relevant,” he said.

“The ethicist thinks about her considerations different from the biologist. In the end, we need to make a decision, but it is critical to have diversity of thought.” -Jean King

Biology professor Samuel Politz, who attended the event, pointed out that the concept of designer babies is not new. In 1930 English author Aldous Huxley wrote in Brave New World about a dystopian future where all embryos were grown in labs and classified in a societal structure.

Dean King, who is spearheading a new neuroscience program at WPI, said she was among those objecting to He’s experiment but felt that more dialogue was needed to explore all sides of the issue and that an event like the Critical Conversations forum provided that opportunity to students and faculty.

“We’re looking to form a community of interdisciplinary scholars to hear different perspectives on the issue,” she said. “The ethicist thinks about her considerations different from the biologist. In the end, we need to make a decision, but it is critical to have diversity of thought. We want our students who make decisions to understand there is not any right or wrong answer. There are many ways to look at it and we need to deliberately think about it at multiple levels.”

The Dec. 5 Critical Conversations forum was the first in an occasional series to respond to topics reported in the news, with a scientific focus.

“The forum came together in a week,” King said. “We want to keep going with this. As we convene during the year, I think students will be interested and it could have a public impact.”