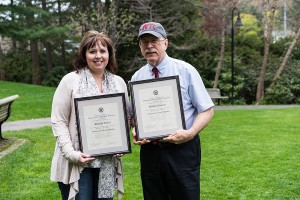 The Trustees’ Award for Outstanding Staff Member was presented to Mike Dorsey and Rhonda Podell during the Employee Appreciation Ice Cream Social on May 6. Several other Long Service and Spot Award recipients were named, as well as the Gompei Selfie contest.

Dorsey, director of research communications, was hired in November 1985. The comments on his nomination forms cited his willingness to help others, his vast institutional memory, and his passion and dedication. Here is a sampling:

Podell, office coordinator in the Department of Mathematical Sciences, was hired in June 2008. Those who nominated were impressed by her positive attitude, eagerness to exceed expectations, and her reliability. Some of the accolades:

The winner of the Gompei Selfie contest was Camille Bouchard-Chhoeuk, Office of the Provost.