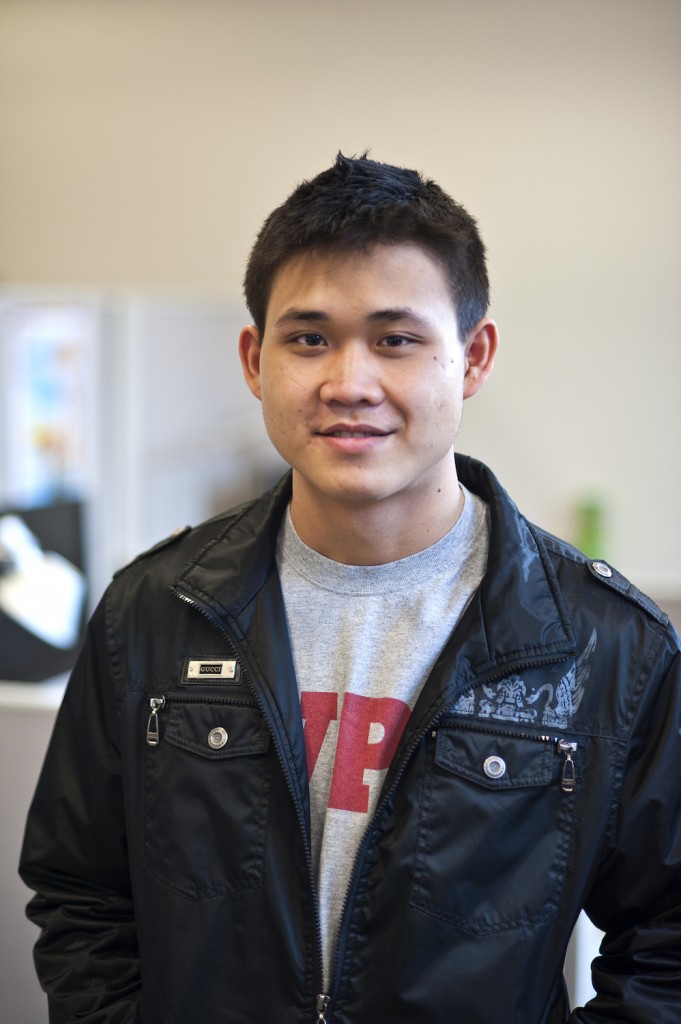 About four years ago, a clothing store owned by the mother of WPI sophomore Sopheaktra Chhim went up in flames.

The building had no smoke detectors or fire alarms. Fire codes and other safety standards were minimal, if they existed at all. There wasn’t even a fire extinguisher on site. The clothes ignited quickly, sparking flames that spread through the building. His mother’s store was a total loss.

The tragedy gave Chhim added incentive to help prevent future losses. He hopes to return to his native Cambodia sometime in the future to help develop safety standards to prevent fires such as the one that devastated his family.

Not every young person living on a rice farm in Cambodia ends up in the United States, traveling there by himself with a limited command of English. But right from the start, his path differed from the rest of his family. No one in his family had attended college and only three of the family’s eight children received a high school diploma. His father was a rice farmer and his siblings spent many hours helping him.

Chhim, in contrast, preferred to spend his time in school. “I was the only one who wanted to go’’ to class, he says. “My siblings, you had to force them to go.’’

His parents supported his academic bent, being “kind and understanding’’ when he spent time behind books rather than farming.

He was determined to make their sacrifice pay off.

“I wanted to go to an American college,’’ he says of his plans. “At least then, I could have a degree and help my family.’’ His natural curiosity inspires his love for education. “I like learning new things,’’ he says.

One of the new things he learned was that Cambodian students could compete for a scholarship program that would send them to study at the Armand Hammer United World College of the American West in Montezuma, N.M.

The college, founded by industrialist Armand Hammer, is a two-year, independent, coeducational boarding school with about 200 students representing 80-90 countries. Most of these students, like Chhim, receive full scholarships.

Acceptance was based partly on exam results. So one Saturday, he made his way to his school to take the test. There was one problem: He didn’t want his parents to know about this and give them a sense of “false hope,’’ he says. And they, in turn, wondered why he was going to school that morning. After all, as his mother pointed out, “it was a Saturday.’’

So he told his mother he was attending a meeting. When she pressed, he admitted he had to take an exam but shared few details.

They would learn soon enough. He was the top finisher among more than 650 competitors. That allowed him to spend two years studying at the college in New Mexico.

“I liked the idea of going away, being independent,’’ he says. “I didn’t want my parents to think they had to take care of me.’’

He boarded an airplane for the first time in his life, with then limited English and fears he might become lost en route.

But he made it and spent two years immersed in the college. While there, he learned about WPI. He was immediately intrigued.

He likes the smaller classes that allow stronger connections with faculty members. And he was impressed by the architectural engineering major, which was new at the time and allowed him to combine two interests, architecture and engineering, into one program.

Now he is eyeing a master’s in fire protection engineering and a plan to return to his home country armed to fight the plague of fires there.

His family never strays too far from his thoughts. His parents’ pride in his accomplishments motivates him. “I feel great because my parents feel great,’’ he says.