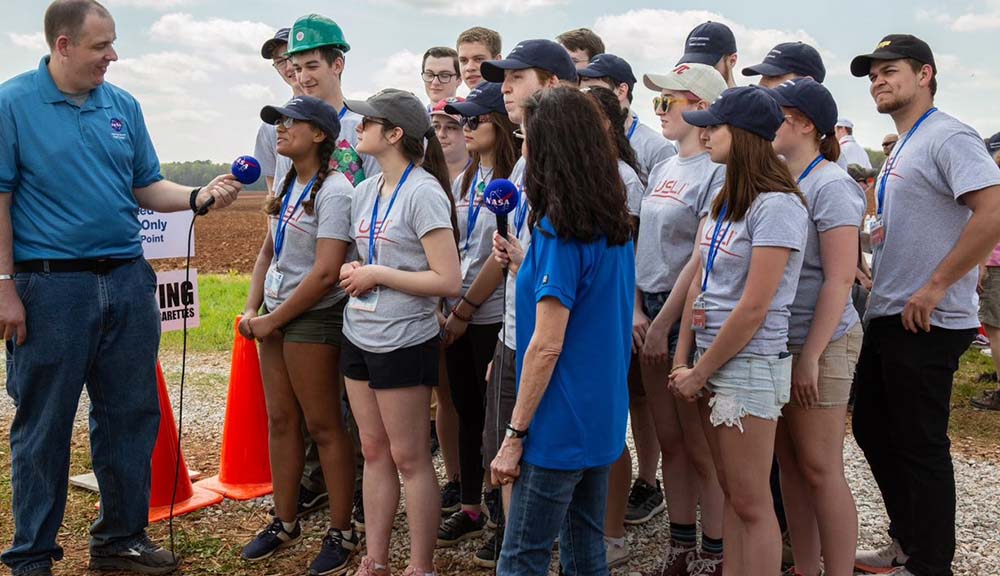 Over the past year, nearly two dozen WPI students designed and built a rocket and payload, with 18 of them going on as a team to enter NASA’s University Student Launch Initiative in Huntsville, Ala. During their experience they learned valuable lessons in rocket and payload engineering, leadership and teamwork, and also got used to meeting deadlines and writing precise NASA-style project review reports.

As freshmen during the 2017-18 academic year, aerospace engineering students Caroline Kuhnle ‘21 and Krystina Waters ’21 learned of NASA’s University Student Launch Initiative, a nationwide competition in which student teams build rockets to precise specifications and launch them at the Marshall Space Flight Center in Huntsville.

For the two women, both lifelong space and rocket enthusiasts, the fuse was lit.

They began a nearly year-long journey that drew in 21 other students—including their colleague and friend Christian “Max” Schrader ‘21—and aerospace engineering professor John Blandino, culminating in Huntsville in April.

The first WPI team to enter the initiative passed a series of milestones to qualify for the competition, designed and built their rocket with its payload, and then launched it. During the process, they had to complete design, flight readiness, and post-launch reviews under NASA guidelines that mirror those required for the agency’s complex aerospace systems.

“This really was a student-driven project from the beginning,” says Blandino, the project advisor. “When I became involved in mid-October of 2018, the project was already under way. Caroline and Krystina were responsible for organizing a team, preparing the initial project proposal to NASA, finding a space to work on the rocket, and making sure all the milestones were met.”

The WPI team, nicknamed G.O.A.T.S (Get Our Apogee to Space)—with a nod to the university’s mascot, Gompei—didn’t win the competition. In fact, as their rocket roared skyward, the engine that the students purchased from a vendor malfunctioned and exploded, and the damaged craft drifted back to earth under its parachute.

But the students and their professor say that the lessons learned have proven invaluable, expanding their knowledge of high-powered rocketry, and providing good preparation for their working lives after WPI.

"These are typical of real-world programs, and having to prepare and deliver these gave the students a taste for the deadline-induced stress and required attention to detail they will encounter in their careers." -- John Blandino

“I learned what it takes to be a leader and the importance of teamwork—because without it this would still just be an idea,” said Kuhnle, who served as a team co-captain, organizing and running team meetings, making sure that deadlines were met and that different groups ran smoothly.  “I learned how to delegate tasks and the importance of being able to rely on each other to get things done.”

Waters described her work on the project as “a major growing experience in my life.”

“It taught me how to be a leader, as well as exposing me to a life with a real engineering career,” said the second co-captain, who oversaw the team’s engineering endeavors and the integration of the rocket and payload work.

“Engaging in NASA’s design life cycle has made me confident in my abilities to formulate, lead, and construct future engineering projects, whether in my own free time or in my future career,” she said.

Schrader, as the project safety officer, made sure everyone followed best practices when designing, building, and launching the rocket. He plans to lead next year’s USLI effort as team captain.

“We learned so much. Not only about building rockets, but also about how the design process works in industry,” he said. “The type of technical writing we did is exactly what we will need to write our MQP (Major Qualifying Project) and reports in future jobs. Working with a large group of people to design many aspects of one rocket has been a great experience.”

Blandino pointed to how the competition made students meet very exacting review milestones.

“These are typical of real-world programs, and having to prepare and deliver these gave the students a taste for the deadline-induced stress and required attention to detail they will encounter in their careers,” he said.

Competition Drew Teams from Around the Country

Some 52 teams were selected to participate in the rocket competition, but of those, only 39 college teams and seven high school teams made it through competition milestones to get to Huntsville.

The college teams were challenged with building a rocket that would ascend to between 4,000 and 5,500 feet in altitude, and upon landing deploy either a rover or an unmanned aerial vehicle, according to certain requirements.

"I learned what it takes to be a leader and the importance of teamwork––because without it this would still just be an idea." –Caroline Kuhnle '21

They were also tasked with outreach activities in the STEM arena and developing a social media presence for their project.

Kuhnle, whose love of space and rocketry were nurtured by countless visits to space museums and model rocket launches with her father, and stories from her grandfather’s time working on the Apollo 11 mission, said that the most challenging aspect of the project for her was “to try to expect the unexpected.”

Waters, whose father and brother taught her about the stars and constellations when she was a youngster and nurtured her dream of becoming an astronaut, cited challenges in engineering and logistics that the new team faced.

“In terms of engineering, the limitations of NASA’s rules were unlike any the rocketry teams here on campus had experienced before,” said Waters.  “This led to multiple designs and iterations before reaching a rocket design and integrated payload system the team was proud of.

“In terms of logistics and documentation, we had to start from the ground up,” she explained, pointing out that because the competition adheres to NASA’s design life cycle, the team was required to write and prepare five extensive documents over a rigorous eight-month schedule.

The G.O.A.T.S rocket climbed to about 800 feet before the engine mishap.

The students were disappointed at the outcome but undeterred in their enthusiasm. They pointed out that the rocket engine was purchased from a vendor as required by competition rules and not built by the team.

“I was sad to see the rocket explode after all we spent the whole year working on it and the payload, but in the end, I was just happy that we were able to make it to Huntsville to compete.”