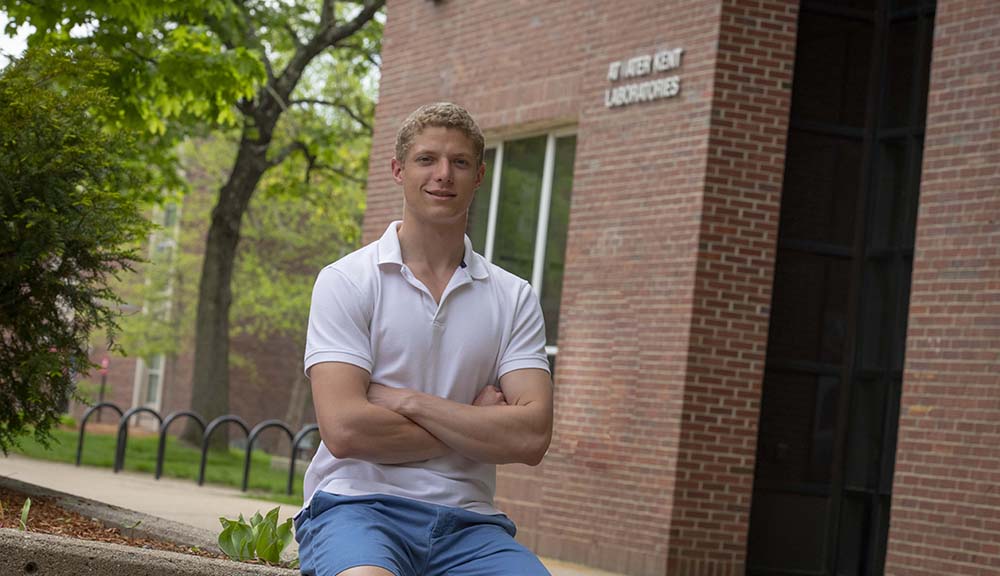 Double major Matthew Adiletta (electrical and computer engineering/computer science) has been awarded a 2019–20 Barry Goldwater Scholarship. He is one of just 496 undergraduates across the country to receive this honor, one of the most prestigious undergraduate awards given in the STEM fields.

Established in 1986 by the U.S. Congress, the highly competitive scholarship recognizes college sophomores and juniors who show exceptional promise of becoming the nation’s next generation of research leaders in the areas of natural sciences, engineering, and mathematics. Adiletta, who—as part of WPI’s combined BS/MS program—will also earn a master’s degree in electrical and computer engineering concurrently, was chosen from a field of more than 5,000 applicants and 1,223 nominees from 443 academic institutions.

“I love anything and everything to do with engineering: hands-on work, learning new skills, and the chance to invent something useful,” says Adiletta, who also plans to pursue a PhD in electrical and computer engineering with a focus on machine learning, artificial intelligence, and computer vision.

In particular, he has his sights set on research opportunities in autonomous driving. “Autonomous vehicles offer the promise of more efficient and safer transportation," he says, "and I would like to contribute to this societal change first at the research level, then with commercial implementation.”

"I love anything and everything to do with engineering—hands-on work, learning new skills, and the chance to invent something useful." —Matthew Adiletta

He is channeling this passion in a not-for-credit project where he is leading a 15-student team to develop a self-driving golf cart. “This project will help me pull together all my course learnings and determine key gaps in research I need to pursue,” he says. “I see this as a great foundation in preparation for PhD-level detailed research in situational awareness and low-latency decision making.”

Alex Wyglinski, professor of electrical engineering and robotics engineering, describes his student as a “curious, hardworking visionary, and a natural leader.” He adds, “Over the past decade, I have interacted with thousands of undergraduate students in electrical and computer engineering … Matthew clearly stands out among his peers.”

It would seem that Adiletta produces results wherever he focuses his energy. An accomplished pianist, he developed a robotic piano player while still in high school that he submitted it as an entry in the 2017 Massachusetts State Science and Engineering Fair. His entry landed him first prize and a $60,000 scholarship to WPI. 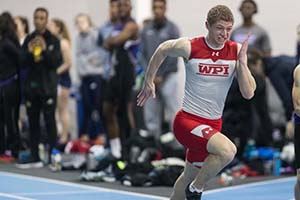 As a member of WPI’s track and field team, Adiletta currently holds WPI’s school record in the 60-meter dash. He says he approaches athletics with the precision and analysis he brings to all areas of his life. “I track how much I sleep and which habits help me perform best on tests, and I organize my thoughts and time properly to manage all my different commitments to classes, projects, and more,” he adds.

Stephen Bitar, instructor in electrical and computer engineering who has taught Adiletta,  notes that he is one of only a handful of students he has encountered during his career to exhibit such a high level of maturity and potential for graduate research at such a young age. “I can attest to Matthew’s diligence, thoroughness, and high standard of quality, which I believe will serve him well as a researcher,” he says.

“Matthew clearly stands out among his peers.”  —Alex Wyglinski

Adiletta says the scholarship will help him reach his future career goals while deepening his understanding of autonomous vehicle technology. “I believe that to be prepared for my future career, I must build a strong engineering foundation across a wide scope of topics, become as technically diverse as possible, cross boundaries and draw connections between disciplines, and become an elite problem solver,” he adds. “My experiences in the lab working on problems that have not yet been solved and that have societal impact are what inspire me.”