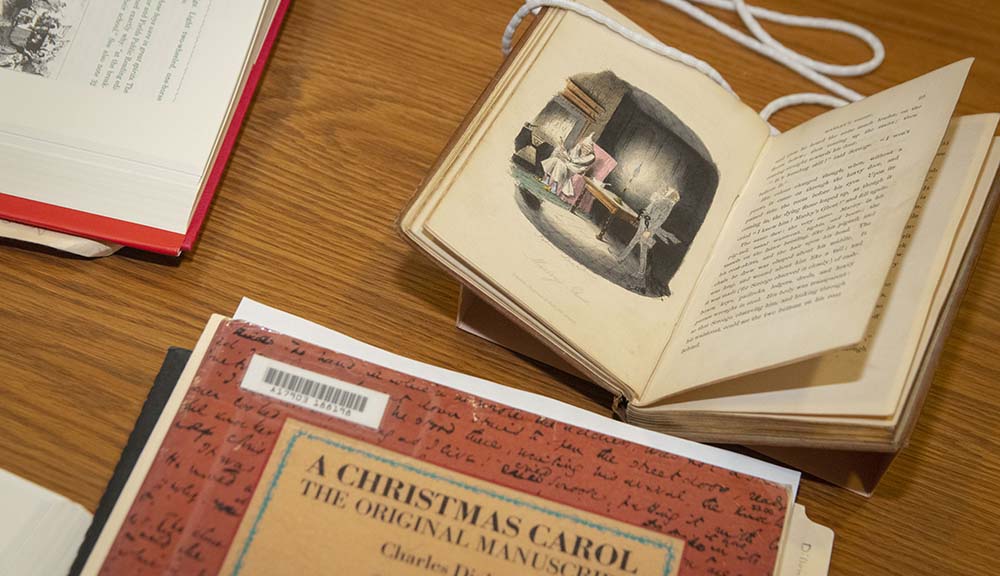 Students in Professor Joel Brattin's Inquiry Seminar study A Christmas Carol--both the book itself, and also its context, examining Dickens's manuscript for the book, and his adaption of the book for the Victorian stage.

For many readers, Charles Dickens’s classic holiday tale, A Christmas Carol, is their introduction to the literary great’s litany of stories.

It was for Daniel Ryan, who discovered the book as a high school student. Since that first encounter, he became an avid collector of Dickens’s published works and related materials. Now, more than 60 years after he began his collection, he and his wife, Alice, are donating it to WPI in hopes that it might inspire in others a love of all things Dickens.

Joel Brattin, WPI’s expert on Dickens, understands the transformative effect A Christmas Carol had on Dan Ryan, and on his own students. Each B-Term, as autumn gives way to the Christmas season, he teaches an Inquiry Seminar that focuses on A Christmas Carol.

During the seminar, Brattin, professor of English, and the small class (no more than 12 students) step into Victorian England and into the pages of the blockbuster first published on December 19, 1843.

Here, students examine a facsimile of Dickens’s original hand-written manuscript, examine a rare first edition of the book with its four hand-colored illustrations, and get a taste of how the book was written, published, performed by Dickens in a remarkable one-man show (which he brought to Worcester’s Mechanics Hall in 1868), and loved for more than 175 years.

Brattin says the author plays an important role in educating WPI’s students, who each fulfill a two-unit Humanities and Arts requirement culminating in an Inquiry Seminar. “A Christmas Carol affords an excellent opportunity for individual research, group work, and collaborative learning through oral and written expression,” says Brattin.

Jake Scarponi ’20 says talking about Dickens’s work is one of the best parts of the Inquiry Seminar.

“My favorite part about this course is the different topics Professor Brattin has us discuss,” says Scarponi, an aerospace engineering major. “We’ve shared our theses on the book, but we’ve also studied a lot of discrepancies between Dickens’s manuscript and the recent text we, ourselves, read, as well as the context under which A Christmas Carol was written and published.”

Other students, like Samantha Smith ’19, feel that Dickens’s famous tale remains well known because the lessons it teaches readers are applicable today.

“When the Ghost of Christmas Present visits Scrooge and says that ignorance is the downfall of humanity, that was an important lesson, both back then and now,” says Smith, a chemical engineering major. “It shows that when people educate themselves, they’re able to elevate society and prevent hatred from spreading.”

The Daniel and Alice Ryan Collection

The Daniel and Alice Ryan Collection on Charles Dickens includes a first edition of A Christmas Carol (when it comes to WPI, it will sit beside the first edition that is already part of the Fellman Collection). A Christmas Carol was Dickens’s first and best-known Christmas book, but many people aren’t aware that he wrote four more: The Chimes (1844), The Cricket on the Hearth (1845), The Battle of Life (1846), and The Haunted Man (1848). He also wrote many stories, sketches, and essays about Christmas (collectively referred to as the Christmas stories) in the 1850s and 1860s for the Christmas issues of his popular journals, Household Words and All the Year Round. A copy of one of those stories, Dr. Marigold's Prescriptions (Joel Brattin says it's one of his favorite pieces of Dickens's short fiction), will be one of earliest elements of the Ryan Collection to come to WPI, just in time for the holiday season. 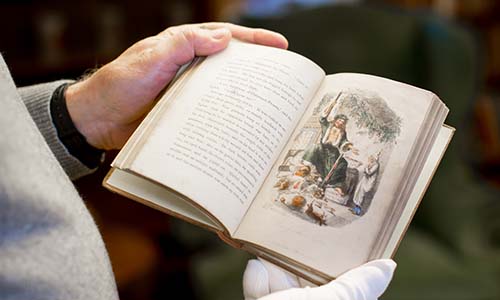 Brattin’s Inquiry Seminars meet in the Robert D. Fellman Dickens Reading Room in the Archives and Special Collections of Gordon Library. There, students conduct their research amid a treasure trove of Dickens materials, including numerous first editions, a complete set of original serial parts of all of Dickens’s novels, original works of art, and the prize of the collection—the attendance book for the Guild of Literature and Art, which contains Dickens’s signature and those of many notable writers and artists of the time. The collection also contains 150 volumes of letters, biographies, and illustrations, and countless volumes of reference works, criticism, and commentaries on Dickens’s life, work, and world. 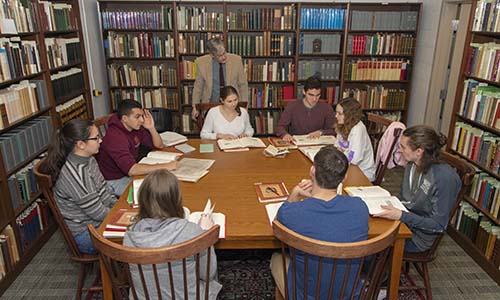 Just as it took four ghosts to convince Ebenezer Scrooge to change his ways on Christmas Eve, it took a few central figures in Joel Brattin’s life to convince him to embrace Dickens’s work. “A childhood friend of mine recommended reading Dickens’s Great Expectations. I liked it,” he says. “Then, my girlfriend in undergraduate school, whom I later married, recommended taking a class on Dickens in college, where I ended up reading six Dickens novels. As an undergraduate at the University of Michigan, I worked with Professor Bert Hornback on interpreting Dickens manuscripts, and I knew right then what I wanted to do for my doctoral dissertation at Stanford.”