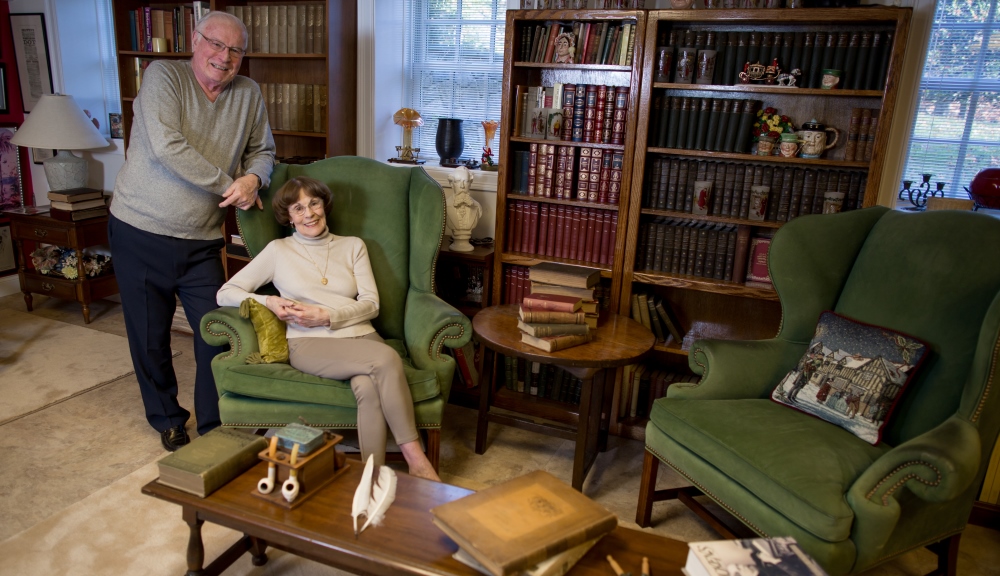 Daniel and Alice Ryan with parts of their collection on Charles Dickens, which will come to WPI in an extraordinary act of generosity

Inspired by a gift of A Christmas Carol, Daniel Ryan built a large collection of publications, art, and manuscripts related to Charles Dickens over the course of more than six decades; he will give the collection to WPI, which has been home to the Robert D.​ Fellman Dickens Collection since 1995.

In A Christmas Carol, Charles Dickens’s timeless story of redemption, Ebenezer Scrooge receives a life lesson via the mournful warning of his deceased business partner, Jacob Marley. “Mankind was my business,” the tormented ghost wails. “The common welfare was my business; charity, mercy, forbearance, benevolence, were all my business.” Though it takes the whole night and visits from three more ghosts, the cold-hearted Scrooge is transformed into a model of kind-heartedness.

For Daniel Ryan, who lives in Massachusetts, a copy of A Christmas Carol given to him by a high school English teacher ignited a lifelong interest in the Victorian author and a passion for collecting that, 65 years later, has produced an extraordinary assemblage of Dickens’s published works and manuscripts, art by the author’s original illustrators, and a host other items related to his career and life. Now, in an act of generosity and benevolence that even the reformed Scrooge himself would have admired, the chemical engineer and former Exxon executive has chosen to give his collection to Worcester Polytechnic Institute (WPI), where it will significantly augment the university’s existing Robert D. Fellman Dickens Collection and create a world-class resource for students, Dickens scholars, and readers. Parts of the collection have already reached WPI, though the bulk of the material will come to the university as a bequest.

“With the original Fellman Collection and the additions we have made to it, WPI already possesses a complete collection of the original published versions of all of Dickens’s novels as well as many other first editions,” said Arthur Carlson, assistant director of archives and special collections in WPI’s George C. Gordon Library. “With the addition of the rich complement of letters and artwork in the Ryan Collection, particularly what may be one of the most comprehensive collections of letters written by members of Dickens’s inner circle, I believe WPI will become a truly world-class research destination.”

The Daniel and Alice Ryan Collection on Charles Dickens, a gift made jointly by Ryan and his wife, will be a transformative addition to WPI’s existing Dickens collection, according to Joel J. Brattin, professor of literature at WPI and a noted Dickens scholar. “This collection is rich in materials that are not well represented in our Fellman Collection,” noted Brattin. “First, there is a significant amount of art by the 16 artists who illustrated Dickens’s novels in their first editions. Ryan has original works of art, prints, and even some of the steel plates used to print the illustrations for the first editions.

In an interview for the Spring 2019 issue of WPI Journal, Ryan recalled how he felt an immediate affinity for Charles Dickens when he read A Christmas Carol as a freshman at a boarding school in Connecticut. His teacher gave him the book as he waited to head home for Christmas break. When he read the chapter in which the Ghost of Christmas Past makes Scrooge relive his youth, something clicked. “Scrooge returns to his boarding school and sees his young friends on a stagecoach leaving to go home for Christmas,” Ryan said, “and that hit me pretty well because I was in the same position, in a way, waiting to go home.” 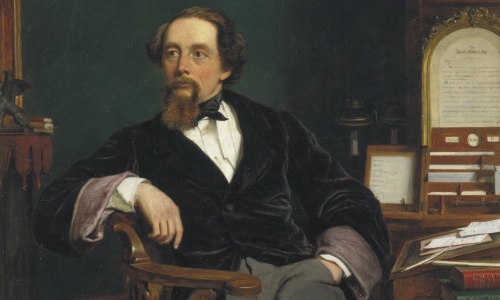 Sharing Dickens with the World

All of Dickens’s novels were originally in serial parts. Serial publication was an innovation that enabled Dickens to reach a broader readership, since the average British reader could not afford the price of a book, but could spare the cost of a chapter at a time. Project Boz, an initiative of WPI’s Gordon Library, is making every serial part of every Dickens novel available online in digital form, enabling people worldwide to read, experience, and study Dickens’s works in their original form.

He began exploring Dickens’s novels in high school and at Yale University, where he earned a degree in chemical engineering. When his mother discovered a complete set of Dickens’s works, some 30 volumes, in a house she had just moved into, she gave it to Ryan, and a lifetime of collecting was set in motion. After an oil-industry career spent largely in Texas and Louisiana, he and Alice retired to the Bay State and installed the Dickens collection in a climate-controlled room.

A few years ago a question about an unusual document he had acquired, which had been signed by all of Charles Dickens’s living children, led Ryan to contact David Paroissien, editor of The Dickens Quarterly, the leading scholarly journal on the work of Dickens. Later, Paroissien, the former professor of literature at the University of Massachusetts Amherst who now lives in Oxford, England, accepted Ryan’s invitation to view his collection when he was visiting Massachusetts. During the visit, Ryan asked Paroissien if he could recommend an appropriate future home for his collection. “It was David who suggested to Dan that WPI might be a good place,” Brattin said.

Parroissien’s suggestion was based on his knowledge of WPI’s already significant Dickens collection, received in 1995 from California chemist Robert D. Fellman. Dan Ryan contacted Brattin and, in time, he and Alice visited campus to see the Fellman Collection. Like the Ryans, Fellman had developed his lifelong fascination for Dickens at the age of 13 after he checked out a copy of The Posthumous Papers of the Pickwick Club, Dickens's first novel, from the high school library in his hometown of Red Lake Falls, Minn. A gift Fellman received in the early 1960s of a set of original early 20th-century watercolor illustrations of Dickens characters ignited his interest in collecting Dickens illustrations and, later, first editions, other publications, and memorabilia related to Dickens.

After retiring as chairman of the Department of Physical Sciences and Mathematics and an instructor of chemistry and physical science at Foothill College in Los Altos Hills, Calif., Fellman chose to donate the collection to WPI, largely as a result of his friendship with Brattin, whom he met while Brattin was completing his PhD at Stanford University. He also left WPI a bequest that supported the maintenance and growth of the collection.

In addition to being impressed by the Fellman Collection and the care WPI has taken to maintain and expand it, the Ryans were taken with the university’s distinctive project-based approach to education and by students they met during their campus visit. “I teach two Inquiry Seminars on Dickens’s works,” Brattin said, “one on A Christmas Carol and one on The Mystery of Edwin Drood. I invited students who had taken those courses, none of whom are English majors, by the way, to meet with the Ryans and that proved to be a very powerful experience for them.” 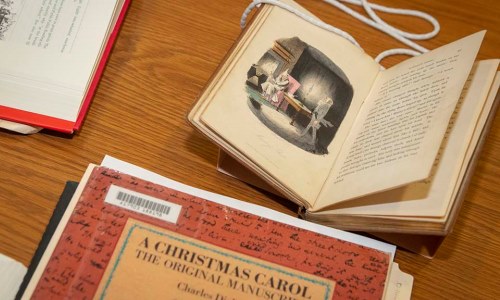 Lessons in A Christmas Ghost Story

As it was for many readers, A Christmas Carol was Daniel Ryan’s introduction to Charles Dickens. It helped set in motion more than 60 years of collecting Dickens’s published works and related materials, a collection that will now come to WPI. Professor Joel Brattin, a noted Dickens authority, understands the transformative effect of A Christmas Carol; he has seen it firsthand as he teaches his annual Inquiry Seminar on this “ghost story of Christmas.” - Read the Daily Herd story.

“Dan is especially interested in how Dickens, through his writing and his own life, explored the ways in which the industrial revolution changed society and affected people’s lives,” Carlson said. “So he asked the students, with what you know about Dickens, and having read his novels, where do you think he would stand, politically, today? And our students gave very thoughtful and insightful answers that very much impressed Dan. He has talked to us about his vision of the 21st century engineer, who will, of course, be well-grounded in engineering, science, and mathematics, but who will also be a humanist focused on using that knowledge to serve society and better the world. I think he came to understand that WPI’s mission is to prepare just that sort of graduate.”

Brattin said that Ryan was also interested in knowing that his collection will be used in creative and useful ways. “Like Bob Fellman, Dan Ryan is a hands-on kind of person who wants to know that the material he and Alice had spent so much time collecting will be used,” he said. “He was glad to see that WPI is a hands-on kind of place, and that our students will have many opportunities to interact with and use the collection in classes, in project work, and, frankly, in ways that we probably can’t even begin to envision right now.”

Carlson said that modern technology offers the opportunity to make the collection useful beyond the WPI community. “We have the potential, through digitization and online dissemination, to open up these research materials to a global audience,” he noted. “We’ve already begun to do that through Project Boz, an initiative begun in 2009 to digitize all of Dickens’s novels in their original, serial editions.”

Dickens, an innovative businessman as well as a groundbreaking author, published all of his novels in serial parts. Each monthly part was packaged with two illustrations, advertisements, and an illustrated wrapper. WPI has already acquired the complete set of original serial parts for all of the novels, and most have been digitized as archival PDFs and placed online. Carlson says the library has plans to reinvest and revitalize Project Boz, not only completing the digitization of the serial parts but moving the project to a new digital platform that will make the parts easier to experience online.

“When Project Boz is complete, WPI will be the only institution in the world to offer the entire collection of serial parts of all of Dickens’s novels in digital form, online, for the benefit of scholars and the enjoyment of readers worldwide,” Carlson said. “These parts can be explored from many angles. They will allow you to trace Dickens’s career as a writer and a social activist, and to see how he transformed the business of publishing. The advertisements provide a fascinating glimpse of everyday life in Victorian London, while the illustrations, which are not always included in modern editions, can be enjoyed in their own right.”

The wealth of material that will housed at WPI thanks to the Ryan and Fellman collections opens the possibility of other kinds of innovative educational, research, and outreach efforts beyond Project Boz, Carlson said. “With the works themselves, the letters and manuscripts, the art, and other materials, there will be opportunities for deeper and more meaningful engagement in which students and scholars can explore not just the novels, but the social and personal contexts in which they were created, the community of people Dickens worked with, and the impact he had on so many people. It’s just fascinating to think about the number of facets that will be available through the study of this remarkable collection of material.”

A special Dickens exhibit with associated programming at WPI’s Gordon Library is planned to celebrate the Ryans’s gift in 2020, the 150th anniversary of Dickens’s death in 1870.