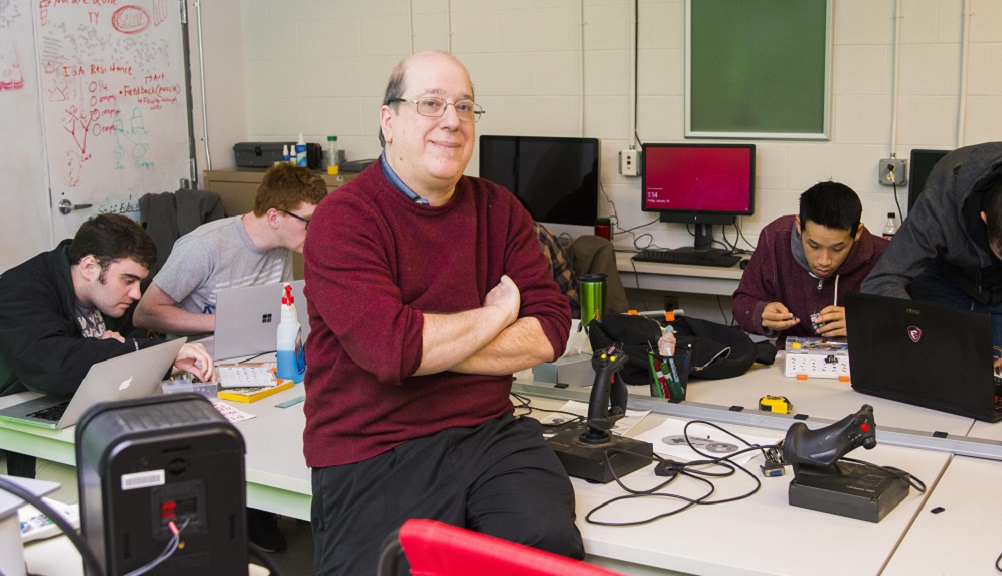 Want to know just how hard your heart is beating while zombies chase you through an abandoned house?

Wondering what it would feel like to get hit in the chest like your character did when facing off with the villain in your latest game?

If Interactive Media & Game Development (IMGD) professor Jeff Kesselman has anything to say about it, WPI students will be responsible for creating devices that will do just that and more, leading to the next big thing in interactive virtual reality (VR) gameplay.

Kesselman is taking the reins on Novel Interfaces for Interactive Environments, a course that will have students use microcontroller hardware and software to create unique devices that will further the immersive experience players get when playing through their favorite games. He says he took on the course because of his experience in the field of virtual reality and gaming interfaces.

“And because it’s fun,” he adds with a laugh.

According to Kesselman, there have always been special input and output devices in the games space, but advancements in those devices—ranging in the past from joysticks, foot pedals, and flight simulators to steering wheels and dance pads—are becoming more topical now because, for the first time, much of the equipment and technology necessary to create these experiences are at a price point people can afford.

“A game is all about where the computer meets the player … this has been a space where there’s been a lot of development,” he explains, adding that there’s still work to be done concerning how well players can interact with the 3-D game space, especially when it comes to physical feedback.

Physical feedback is just one of the topics students will tackle; they’ll work in teams to program several new alternative input/output systems as part of the course. Examples of additional options available to students are designing a heart rate tracker or a locked device for escape rooms that rearranges the actions needed to open it each time it’s played, something Kesselman is collaborating on with fellow professor Dean O’Donnell.

“Part of the college experience is peeling open the black boxes so that the students really understand what’s going on inside. You often get college students who have done programming, but don’t really know what happens after those magical words go into the computer—which is what we teach them here ... when things don’t happen the way you’d expect them to, you’ll have some idea how to figure out why.” -Jeff Kesselman

However, the VR environments that students will be working on aren’t just dedicated to games: Kesselman says the programs also have a great potential for teaching value, giving students the opportunity not only to see what they’re learning about, but to interact with it. “We have been collaborating in the AR/VR Lab on an augmented lab training program with the biochemistry department,” he gave as one example.

While the class undoubtedly sounds like fun, Kesselman is quick to point out that much of what students learn can give them an invaluable edge in the future, whether they’re working in laboratories, on gaming devices, or for movies, all of which have special outside interfacing needs.

“Part of the college experience is peeling open the black boxes so that the students really understand what’s going on inside,” he says. “You often get college students who have done programming, but don’t really know what happens after those magical words go into the computer—which is what we teach them here ... when things don’t happen the way you’d expect them to, you’ll have some idea how to figure out why.”

Kesselman will be teaching the basics of electronics in Novel Interfaces for Interactive Environments, so it’s perfect for beginners or for those who have done a lot of work with computers but are interested in learning more about how the computer or system interacts with the outside world.

“I’m also hoping we can deliver some lasting value out of this, value the students can take to other classes and share with their peers,” Kesselman says. “I’m really excited to see where it goes.”