Fourteen-year-old Avery Clowes listened from the front row as retired Air Force test pilot and NASA astronaut Charles Precourt described his Space Shuttle missions while showing breathtaking photos and video taken from inside the spacecraft’s cockpit with views of Earth and the Northern Lights from orbit. Some of the images showed Precourt docking the shuttle with the now-defunct Russian space station Mir, delivering new cosmonauts and returning an American to Earth.

Avery got to ask a question during the presentation, and later got to chat with Precourt and have his photo taken with the Hudson native. “It was awesome,” he said of the experience, which occurred near the end of Saturday’s TouchTomorrow festival held on the WPI campus. 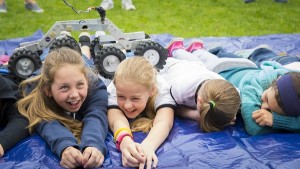 Avery, his mom, Liz Luc-Clowes, and his 9-year-old sisters, Sage and Maya, were among 7,500 who attended the fifth annual TouchTomorrow. In fact, this was the third year the Bolton family attended.

Luc-Clowes said that the exhibits and speakers always sound interesting, but she was most impressed by the open labs and opportunity to speak with faculty and students about the work they do.

“That’s great, the caliber of what’s going on here,” she said. “That, I really appreciate a lot.”

She said the family got to meet Bernard Harris, another former astronaut, at WPI, and the girls attended a half-day engineering program here, which opened their eyes to the possibilities that STEM and higher education hold.

“WPI has all these entry points for kids. It’s one of the things I like so much about this place,” she said. 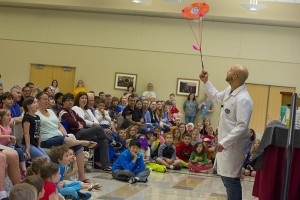 TouchTomorrow provided exhibits and programs to inspire and stimulate young minds over the main campus and WPI’s locations at 50 and 85 Prescott St. In addition to Precourt, visitors thronged to hear ABC “BattleBots” champion Paul Ventimiglia ‘12, who displayed and talked about BattleBots-winning robot Bite Force, and provided a sneak peek at the robot he’ll be competing with on this year’s show.

Stephanie Pasha, assistant vice president and chief of staff in President Laurie Leshin’s office, said organizers were delighted that attendance didn’t seem to be hampered by rainy weather that moved in after the start of the event. “We’re pleased to say we had 7,500 attendees today. And given that the weather pretty nasty for most of the day, that’s outstanding,” she said. “The astronaut’s talk and Paul Ventimiglia’s talk were so well attended, and we think we inspired a lot of future scientists.” 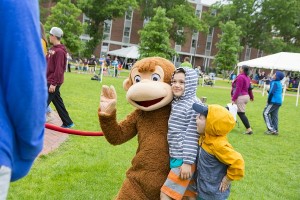 A survey being sent out to attendees will gather feedback on the myriad exhibits and demonstrations.

“Surprisingly, in the last couple of years that we’ve done surveys, the most important part to people has turned out to be faculty demonstrations,” Pasha said, “which we found to be great news, because we assumed it would be the astronaut or NASA. But, it’s really our own faculty that people walk away remembering.”

Pasha said that the main goal is to expose a broad range of people to what science, technology, engineering, and math have to offer to solve the world’s larger problems.