A New Face on the Quad

• Under a canopy set up on the Quad, a few yards away from the site of the former Alumni Gym, President Laurie Leshin and selected officials yesterday broke ground for the Foisie Innovation Studio, which will house a residence hall, a robotics lab, makerspace, and high-tech classrooms where the 100-year-old gym stood. 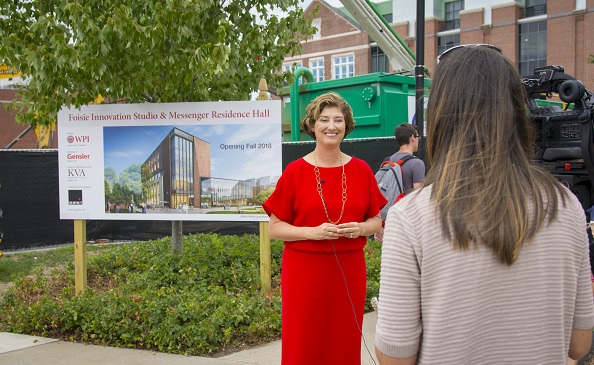 President Leshin does a TV interview in front of a rendering of the Foisie Innovation
Studio.

During the ceremony, Leshin announced that with alumni support, the university met the George I. Alden Trust Challenge. In January 2015, WPI received a $3 million challenge grant from the Alden Trust—a pledge that would be fulfilled only if WPI alumni raised $9 million in 18 months.

Leshin also announced that the 140-bed residence hall that will occupy the top three floors of the new building will be named the Messenger Residence Hall in honor of George '51 and Priscilla Messenger. The couple established the George and Priscilla Messenger Endowed Scholarship Fund in 2001, and has made additional generous commitments to that fund over the years.

“This is really an incredibly special day for WPI, a day you might say was 100 years in the making,” Leshin told the gathering of students, alumni, faculty and staff, “a key milestone as we seek to elevate our impact through our Strategic Plan at WPI.” 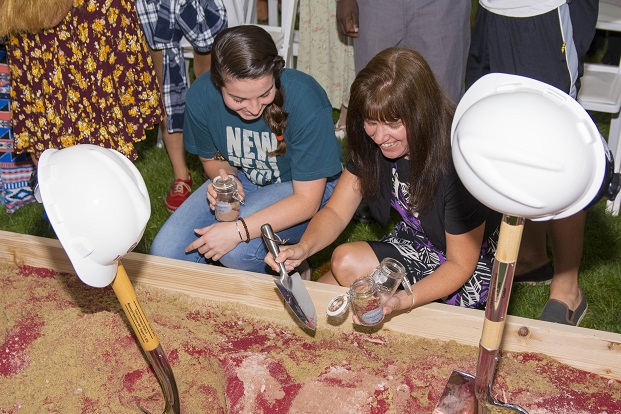 In October 2014, WPI Alumni launched a fundraising project to help fund the creation of the Foisie Innovation Studio, the future hub of WPI’s distinctive project-based approach to STEM higher education. All told, $18 million has been raised. Prior to the challenge grant, $6 million was raised from 250 donors. Following its launch, the Alden Trust Challenge inspired 1,300 donors, some first-timers, and some who hadn’t donated in years, to contribute to the project.

Leshin recalled her inauguration two years ago, when she spoke of how the university might think creatively of how to carry the groundbreaking WPI Plan into the future. “I spoke about a future focus of having an impact on WPI’s founding ideals of theory and practice,” she said. “And I spoke of a place where this could emerge on a daily basis. And subsequently, through our strategic planning process, the building we break ground on today is even more central to our goals.”

Surmising that the campus will refer to the building as “The Foisie,” she envisioned a place that will animate and expand the ideals of the WPI Plan, and will lead to a positive impact in Worcester and communities around the world.

The $49 million, 78,000-square-foot facility is named for Robert A. Foisie, a 1956 graduate of WPI and the university’s most generous individual donor, whose lifetime commitments have helped nearly 600 students realize the dream of a WPI education.

Plans include a robotics lab, makerspace, and high-tech classrooms for the Great Problems Seminar, courses that introduce first-year students to WPI team-based projects. A Center for Innovation and Entrepreneurship will support the “practice” side of WPI’s motto by helping students find paths to commercialization for their projects. The Global Impact Lab will house WPI’s global projects and highlight student project teams working throughout the world.

“Alumni Gym was an integral part of campus life, and we are so grateful for its service, and for the dedication of the alumni who brought it into being,” she said. “It was a truly incredible part of our campus, but we were thrilled to have the news Sports and Recreation Center, which allowed us to decommission it in 2012.” 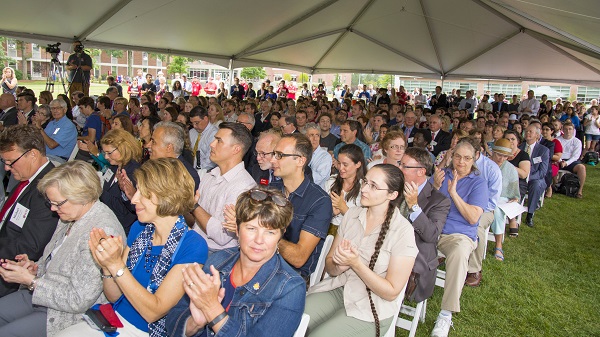 A large crowd was on hand for the groundbreaking ceremony.

She noted—to loud applause--that with the opening of the Sports and Recreation Center, for the first time ever, WPI was ranked by the Princeton Review, earning 11th in the nation for the quality of its athletic facilities.

Maltese, who serves as vice chair for the Board and chair of the Committee on Facilities and Campus Infrastructure, said that this is the beginning of another future on the former gym site. “We came to the conclusion that the design of the fortress gymnasium building was not conducive to the open and collaborative space of an innovation center,” she said. “The Board of Trustees worked with administration and outside experts to make sure we had all the possible options.”

She then thanked the alumni who created Alumni Gym 100 years ago. “With that same energy and spirit we move forward to bring a new face to the Quadrangle,” she continued. “The Foisie Innovation Studio is the embodiment of WPI’s Plan, spirit of collaboration, and the notion that many minds may come to inspired conclusions in working together.”

At the conclusion of the ceremony, Leshin invited the audience to take glass Ball jars kept on hand to scoop some of the sandy brick mixture as a keepsake of Alumni Gym.

Elzani van Zyl ’17, a biomedical engineering major from South Africa, eyed her jar of reddish granules and said she looks forward to the completion of “The Foisie.”

“Part of what’s going in the Foisie Innovation Studio is makerspace, and I was interviewed by the IQP team for the makerspace," she said. "I think that’s something that will help the WPI community, because there’s nothing like that currently. It provides an area for students to do their own projects or work on ongoing projects that might not necessarily be for classes.”

Van Zyl said Alumni Gym was closed prior to her arrival at WPI, but she considered it an iconic part of campus. “I always heard interesting things from the swim team about the pool that they called ‘The Tub.’ I was never able to partake in using the building, but it was still something that was a part of WPI’s community.”