Two groups of student recipients of the highly competitive Kalenian Award are looking to improve technologies to make the world a better place on the ground and in the skies.

Established in 2006 through the generosity of Alba Kalenian in memory of her late husband, Aram ’33, an inventor, the award provides seed funds to support and advance the ideas and inventiveness of WPI students, faculty members, and alumni and to encourage similar innovation and entrepreneurship across the academic community.

Each submitted concept is evaluated on its potential in a commercial market; how a business plan could evolve from the idea; and the concept's likelihood for success. This year 19 proposals were reviewed and narrowed down to the top two. Students working on two novel research projects will share a $20,000 prize purse—one group is developing a new way of manufacturing lithium-ion batteries, the other is developing technology for an autonomous aircraft.

Aaron Birt, a PhD student in materials science and engineering, says his project is all about coming up with a new way to make batteries.

“They’ve been making them the same way over 20 years,” he explains. “The method of manufacturing came out of necessity when we stopped using old cassette tapes. They stopped using those factories and said, ‘What do we do with the millions of dollars of equipment?’”

The old equipment was then used to manufacture lithium-ion batteries, Birt says. “All they did was take the basic lithium oxide as a means for power to be generated and mixed it with a couple of other things and pasted it onto aluminum foil like peanut butter. It's a goofy process, but worked given what they had to use for equipment. Fast-forward 20 years—people are looking at how to make a better battery.”

Birt’s company, Kinetic Batteries, is commercializing technology invented at WPI for developing a new way of manufacturing lithium-ion batteries. The company is producing lithium-ion battery cathodes, one of the four major battery components, without the traditionally required solvents, polymeric binders, and carbon black. By eliminating these components and changing the way the cathodes are produced, Kinetic Batteries is able to offer unique energetic properties in its batteries with a fraction of the capital cost as compared to traditional tape casting approaches, he says, by replacing the “peanut butter spreading machine” with a spraying machine. His business will also supply the components needed to make the batteries that will be much easier to recycle than traditional batteries.

“We’re modifying the spreading process, and instead of spreading peanut butter, we’re removing extra ingredients and focusing on what gives you energy,” he explains. “It makes economic sense. We’re not just doing it because we like it. It’s good business and makes scientific sense to use better materials and faster production for less cost.”

The project started in the fall of 2015 and has advanced the technology, securing a $40,000 award from the Massachusetts Technology Transfer Center.

With the money from the Kalenian Award, Birt says his company will be able to develop a fully functional prototype manufacturing line. 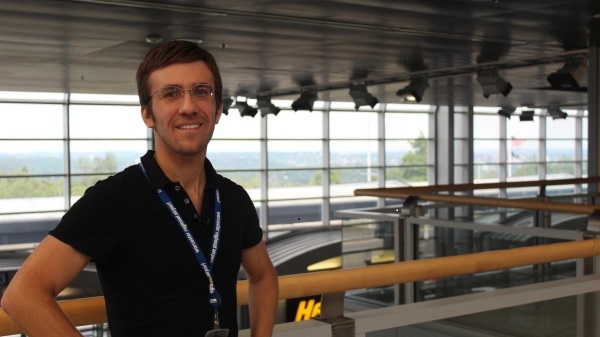 Nicholas Cyganski '17 and his team also won the Kalenian Award for their Autonomous Cargo Aircraft Project (ACAP), a private and academically funded effort to build the world's first completely autonomous civilian aircraft, from start-up, to shutdown.

Cyganski, a robotics engineering major, says that three years ago he had the idea of transporting cargo in the U.S. with all-autonomous aircraft.

“That’s the first place you’ll see it, because people are not ready to let robots fly them, but they are willing to allow robots to fly their packages,” he says.

A pilot and aircraft owner himself, Cyganski’s passion for aviation is deep-rooted. He started his own flight school, AeroVenture Institute, two years ago in Southbridge.

“My dad [WPI professor David Cyganski] got his pilot’s license in the 1990s and I took to flying at 2 years old,” he says. “He stopped flying when he was diagnosed with cancer. He beat the cancer, but never got back into it. It broke my heart, so I took lessons and last year I bought back my dad’s plane. It’s a Piper Warrior, the plane I was trained in and grew up flying in.”

He hopes it will inspire his father to start flying again.

“If you told me three years ago when I started ACAP in my dorm room that I would soon invest over $45,000 of my own money on the project, I would have said you were crazy, but I wouldn't have done it if I didn't believe in what it can do for society." -Nicholas Cyganski

The idea for ACAP started with a real-time economic simulation that showed a fleet of light autonomous aircraft carrying cargo in the U.S. would reduce shipping costs by a factor of four, and increase speed by a factor of five, he says.

So far, private investors have made it possible to buy a Piper Cherokee 140 four-seat aircraft, and store it at Worcester Regional Airport. The goal is to have the world's first fly-by-wire general aviation aircraft. Last summer, a team of 12 from across six majors—drawing expertise from government sponsors, the Federal Aviation Administration, the Aircraft Owners and Pilots Association, and the Experimental Aircraft Association—built the plane.

“If you told me three years ago when I started ACAP in my dorm room that I would soon invest over $45,000 of my own money on the project, I would have said you were crazy, but I wouldn't have done it if I didn't believe in what it can do for society,” says Cyganski. “The Kalenian prize is just the first step in satisfying our investors, and putting the technology in larger, more capable aircraft.”