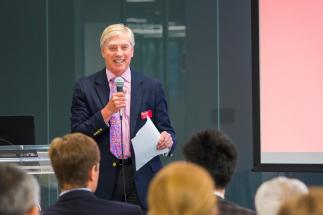 WPI’s commercialization of a lithium-ion battery upcycling process invented by researcher Yan Wang has been awarded the Better World Project Award from AUTM, the Association of University Technology Managers.

Sixty-five applicants from seven countries competed for the award, which recognizes technology transfer professionals who support a better world through the commercialization of academic research. WPI was announced as the winner at AUTM’s recent annual meeting. 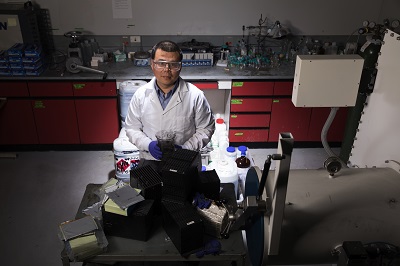 “Yan Wang recognized more than a decade ago that lithium-ion batteries were powering everything from cell phones to electric vehicles, and that a better recycling process was needed to reduce waste from old batteries and recover materials for new batteries,” says Todd Keiller, director of the Office of Technology Commercialization. “His innovation, which was patented and led to the creation of a new clean-tech company, perfectly illustrates WPI’s emphasis on research and its application to address the world’s critical problems.

The process invented by Wang, William Smith Dean’s Professor in WPI’s Department of Mechanical and Materials Engineering, shreds old lithium-ion batteries, treats them chemically, and recovers precursor and cathode materials for the manufacture of new batteries.

WPI worked with Wang to protect his discoveries, filing the first patent application on his technologies in 2012. His discoveries are now at the core of a spin-off company that is planning to establish large battery recycling and processing centers.

It's a path to commercialization that WPI is helping other faculty and student researchers follow. The university offers National Science Foundation Innovation Corps (I-Corps) training that provides mentoring to student and faculty researchers who think they have ideas for commercial products or services. The program teaches entrepreneurs to test their ideas by talking with at least 30 potential customers and then making refinements.

In addition, Keiller helps entrepreneurs with the important steps that protect intellectual property. The Office of Technology Commercialization received 42 invention disclosures during the 2021 academic year and signed 13 agreements that licensed inventions to outside parties. Twenty patents were issued on intellectual property developed by WPI researchers.

Wang and Eric Gratz, then a postdoctoral researcher, attended national I-Corps training in 2014 to begin exploring the formation of a battery recycling company.

“I-Corps guided us to think about the market potential for battery recycling and the reuse of cathode materials,” Wang said. “We interviewed 137 potential customers, including battery makers and electric car companies, and we learned how a new business might fit into the battery industry. It was a valuable experience.”

Along with Diran Apelian, founder of WPI’s Metal Processing Institute, Wang and Gratz co-founded Battery Resourcers. WPI licensed the recycling technology to Battery Resourcers and provided an investment from the university’s Commercialization Fund.

Wang also continues his research at WPI into cathode materials and reported last year in the journal Joule that recycled materials from used lithium-ion batteries can outperform new commercial materials.

“It was rewarding to see WPI honored by AUTM for commercializing Yan Wang’s discoveries,” Keiller says. “His work has the potential to transform the way we use and re-use lithium-ion batteries. It’s a great example of the kind of world-changing work underway at WPI that can really flourish when shepherded strategically through commercialization channels.”