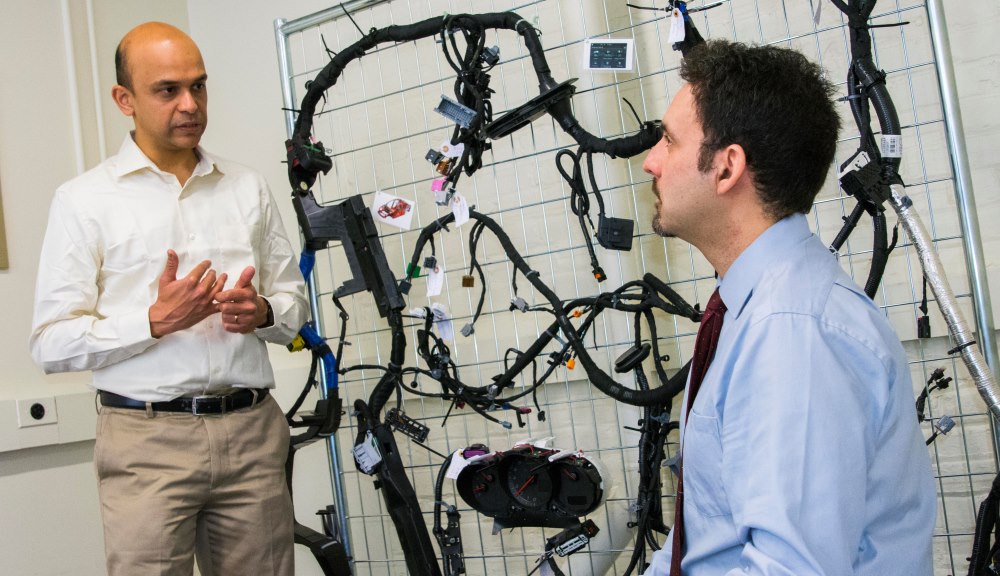 Raghvendra Cowlagi, left, and Alexander Wyglinski, in the MITRE-WPI Collaboratory. Behind them is the wiring harness for a 2014 Chevrolet Impala, which is used for student projects on autonomous vehicle security.

With a $425K NSF grant, WPI professors Raghvendra Cowlagi and Alexander Wyglinski work to make self-driving cars safer and more reliable by bringing together research on autonomy and wireless networking

An aerospace engineer and an electrical and computer science engineer at Worcester Polytechnic Institute (WPI) are combining their work to find the key to developing self-driving cars that can operate safely and efficiently, even in complex city environments.

With a three-year, $425,000 award from the National Science Foundation (NSF), the two researchers are bringing together different areas of work—decision making for self-driving cars, and wireless communications—to create a network that will enable these vehicles to share information about everything from traffic flow to road conditions and accidents. By enabling cars to communicate and base their decisions and actions on the information they receive, the researchers believe they can make it possible for autonomous vehicles to more safely cruise on highways at 70 mph and navigate congested city streets, a feat that remains a challenge for today’s autonomous vehicles.

Raghvendra Cowlagi, assistant professor of aerospace engineering, the principal investigator for the project, focuses on self-driving cars, or vehicles that can operate using computer intelligence independent of a human driver. Alexander Wyglinski, associate professor of electrical and computer engineering and co-PI on the project, is an expert in the wireless communications needed to give self-driving vehicles the awareness of their surroundings that will let them operate more safely. Though complementary, the two areas of research are not often combined, which the WPI researchers find can be problematic.

“There is a huge disconnect between the self-driving car community and the connected vehicle community,” said Wyglinski, who is also president of the IEEE Vehicular Technology Society. “We’re trying to change that. The more information a self-driving car can take in from cars around it will help its decision-making algorithms make the correct decision. If we can unify the research, we’ll have self-driving cars making decisions they couldn’t make using radar, lidar, and sensors alone.”

Part of Wyglinski and Cowlagi’s work is figuring out how to meld data from the vehicle’s onboard sensors with information being wirelessly transmitted from other nearby self-driving cars about their speed and what kind of traffic congestion and accidents they are detecting with their own onboard sensors. Even traditional cars that require human drivers can transmit, albeit limited, information, like data emitted from tire sensors or cell phones in the car, which will tell an autonomous car that the other vehicle is close by.

“This is time-critical information, so we need a network that can handle that,” Wyglinski said. “The wireless link can’t have any delay, and there can be no dropped data packets, which cause network interference. If you’re on a highway going 70 mph and there is a car accident just ahead, you need that information without a hitch.”

They are also exploring how the network can cull irrelevant information from potentially hundreds of connected cars in the vicinity, so the vehicle can focus on information it needs for immediate decision-making. For example, if the car plans to take an exit two miles down the road, it can ignore information from cars that are beyond the exit, focusing, instead, just on data about traffic and road conditions along its planned route.

Parsing through data from dozens of cars could be inefficient and time consuming, they noted. Selective listening, or focusing on information from just the most relevant vehicles, would save processing time and energy, and enable the computing to be done without delay and without the need for a high-performance computing system on board.

“This is one-of-a-kind work,” said Cowlagi. “There’s no other research that falls along these lines, at least for self-driving cars. This research is going to be a lot more relevant than any single thing I could do in decision-making alone. Bringing these two disciplines together is going to be a lot more impactful than either one of us could achieve alone in our own fields.”

Wyglinski also focused on this unifying research at the February 8 IEEE Connected and Automated Vehicles Summit in Santa Clara, Calif., which he helped coordinate. The summit brought together industry leaders, like Nissan and Toyota, to focus on uniting research in both autonomous decision making and wireless communications to fuel self-driving car research.

Wyglinski said there were nearly 200 attendees at the conference—coming from research fields that included security, wireless connectivity, autonomy, auto manufacturing, and sensors.

“It was great to get these communities together to start discussions,” said Wyglinski. “There were a lot of differences of opinion on the role of communications with self-driving cars. The community is trying to wrestle with whether wireless communication is crucial for autonomous cars. We will definitely have more follow-on events.”

Learn more about this work in a Daily Herd Q&A with Raghvendra Cowlagi and Alexander Wyglinski.