Twisted versions of the American Dream

The play focuses on nine presidential assassins and would-be assassins in the context of a carnival, from Booth’s murder of Lincoln in 1865 to Hinckley’s attempt on Ronald Reagan in 1981. It’s a wild, surrealistic look at American history—and the VOX players and crew are having a wild time bringing it to life.

For the first time, the fall production is both student directed (Michael Gagliano ’16) and student produced (Emily Aldrich ‘17). Although the winter musical and the spring cabaret are always student directed, until this year VOX had hired a director in A-Term. Some research about theatrical practices at other colleges led to the decision to make Assassins a fully student-run production.

Gagliano is also the president of VOX, the director of Sound Logic, and the student conductor of the Vocal Performance Lab. While at WPI, Aldrich has focused on wardrobe work, stage-managing, and acting. 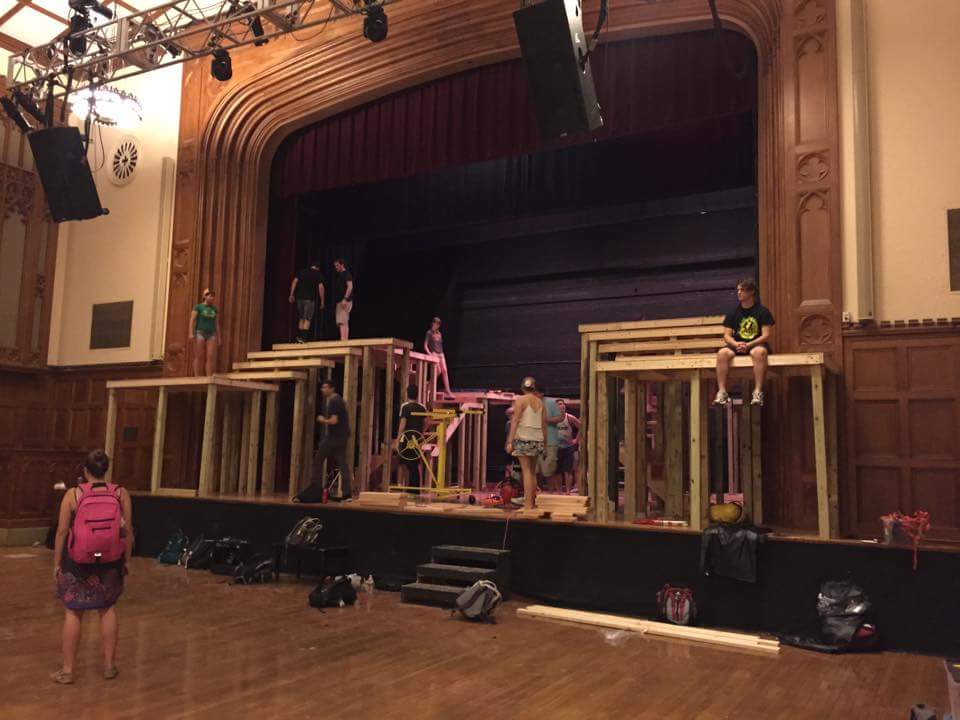 Working on the set of Assassins in Alden Hall.

The primary characters were cast and work on the set began as soon as the VOX production of Avenue Qfinished in D-Term.

“We bought a Home Depot and a half,” says Aldrich. The set is enormous, extending “farther than any other set ever has before. It goes past the curtains so that it curves around and makes an omega shape.”

Given the cast of 22 and the technical sophistication of the show, it was especially critical to do as much preparation as possible over the summer, note both Gagliano and Aldrich.

“It was important to get all of the creative juices flowing so we had a plan when we got back to campus,” says Gagliano. With students from across the country involved, cast and crew relied on Skype and Google Hangout for video conferences. Once they returned to Worcester in August, they hit the ground running, rehearsing “from 10 a.m. to 10 p.m.” before classes started, he says, and then full weekend days and evenings for the past several weeks.

“We hold special auditions in A-Term and leave a few things open so we can cast freshmen—that’s a hugely important thing,” Gagliano says.

Though 99 percent of the tech work was complete by fall, there are also some freshmen on the crew, says Aldrich.

In this particular show, one position stands out: “There is one person whose entire job is to look at everything for historical accuracy, from wardrobe to how to design to the actors,” she says. “For instance, we found out that John Wilkes Booth had a tattoo on the back of his hand and so that’s now incorporated into the hair and makeup aspect of the show.” 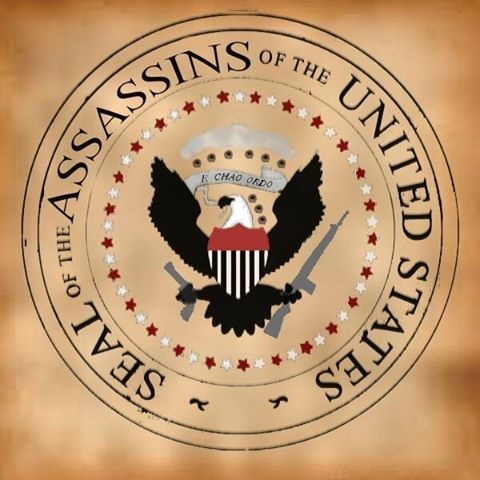 The actors, too, have been fascinated by the real-life stories of their characters, studying to find out how they spoke or moved. There are even sound files for the more recent presidential assassins, notes Aldrich.

During the long and dedicated rehearsal process, the complicated nature of the show has resulted in a deep appreciation for how hard everyone is working.

“The actors are helping out with scenic, scenic helps with sound, lighting and sound are interconnected, props and wardrobe are connected,” she says.

Gagliano concurs, adding that as a director “you notice the hard work that everyone is putting in. When one of your jobs is to critique—it’s so hard. I think, ‘Who am I to judge sort of thing?’”

He also finds that directing has given him “much more of an appreciation of the show as a whole” than he had as an actor.

“It’s a very unorthodox set up,” he says of the production’s premise. “It features some of most hated people in American history as main characters.”

But he suggests that audience members might be surprised by their responses to these real-life killers.

“You don’t necessarily leave the theatre liking them, but you can at least feel a connection,” he says. “You can at least recognize that they were human beings.”

Is that what Sondheim wanted?

“At the end of the day, I believe that what he’s trying to say is that all these people were doing was chasing their version of the American Dream. It went the wrong way and they failed at it.”